Redefining Populism and the Creation of Social Conservatism 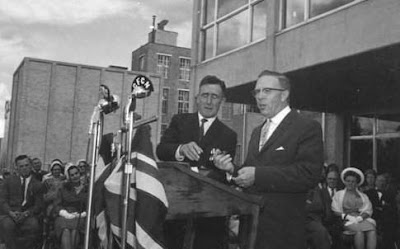 By the 1960s Ernest Manning had become increasingly concerned that Canada was threatened with economic and moral ruin, which he attributed to the rise of socialism. And while he felt that Social Credit principles were the only thing that could save the country, the SoCon party was in disarray, now attracting only those from the right-wing fringes.

And it was this moral and economic decay that prompted him to co-write with his son Preston, Political Realignment, which would combine free enterprise with social concerns. The book was a blueprint for what Manning called 'social conservatism.'

Funding for it's creation came from a newly formed organization, known as the National Public Affairs Research Foundation (NPARF), where Preston was engaged as a 'policy researcher.'

A report by columnist Don Sellar in the Calgary Herald on 21 July 1967 described the NPARF as a somewhat secretive, staunchly right-wing, lobby group funded by several prominent businessmen, including R.A. Brown, president of Home Oil, Cyrus McLean, chairman of B.C. Telephone, Renault St Laurent, lawyer and son of the former prime minister, Ronald Clarke, an Edmonton architect, R.J. Burns, a Calgary lawyer, and A.M. Shoults, president of James Lovick Ltd. of Toronto, all of whom were close friends of the elder Manning." (1)

Besides Realignment, Preston Manning also helped to create the White paper, a social engineering plan that focused on the sovereignty of the individual, to combat what they saw as the threat of collectivism (socialism) that had become quickly accelerated with the introduction of public health care.

Human resources will be treated as being intrinsically more important than physical resources.

Changes and adjustments to changes will be proposed, but these will always be related to fundamental principles.

A free enterprise economy, in which all individuals have maximum opportunity to participate, will be regarded as more desirable than a state regimented economy.

A supporting function, rather than a domineering function, will be ascribed to the state relative to resources development." (1)

And they attempted through NPARF to join the Social Credit and Progressive Conservative parties of Alberta, with aspirations of eventually creating a national party.

Manning's second project with the NPARF was 'an investigation of the possibility of putting together the aging Social Credit Party of Alberta ... with the up-and-coming Progressive Conservative Party of Alberta under its new leader, Peter Lougheed." Erick Schmidt and Preston Manning met with Lougheed's group, represented by Joe Clark and Mery Leitch (later energy minister in the Lougheed cabinet), on several occasions, and eventually produced a draft plan for amalgamating the two parties under the banner of the Social Conservative party. The idea was quickly rejected, however, by officials both within the Manning government and the Lougheed camp." (1)

Joe Clark had a history with both Preston and Social Credit.

Nonetheless, the idea of a realignment of right-wing forces stayed with the Mannings ... The book [Political Realignment: A Challenge to Thoughtful Canadians], written in the same style as the White Paper, expressed Ernest Manning's contention that real political choice had disappeared from the federal Canadian scene because the parties —particularly the Liberals and the Progressive Conservatives — were not ideologically distinct. Hence, Ernest Manning proposed that political choice be re-established through a realignment/ polarization of political thinking and organization. The end product of such a political realignment would be social conservatism, an ideology that Manning defined as welding 'the humanitarian concerns of those with awakened social consciences to the economic persuasions of those with a firm conviction in the value of freedom of economic activity and enlightened private enterprise. (1)

But the time wasn't right and the proposal not realistic. There had been a lot of social change as a result of the Civil Rights Movement and a search for a more open and just society. This was Trudeau's time.

The problem with Ernest and Preston Manning was that they had almost cut themselves off from the real world. Ernest rarely spoke to his constituents except through his radio Bible program. When Preston attended school, he had to go to his father's office where he did his homework before the two headed to their house.

When he attended university, it was understood that he avoid relationships, except with those who thought as he did. Not a large group.

So their political thought was out of step with modern society.

In many ways, this semi-isolation, also created Stephen Harper's narrow minded thinking. Growing up in what his biographer, William Johnson, referred to as the "quintessential WASP middle-class suburb."

The End of Social Credit

Manning stepped down as Premier in 1968, as the party was losing steam. The reins would be passed to Peter Lougheed and his PCs. In September of 1979, the Camrose radio station, CFCN - the station on which Aberhart had begun broadcasting 'The Back to the Bible Hour' in 1925 — announced that it was dumping the show because of low ratings.

Federally, Joe Clark won the 1979 election for the Tories, only to lose power a few months later, giving Trudeau another mandate. Many blame Clark's obstinance in not joining with the stronger Quebec branch of the Social Credit movement: The Creditistes, led by Fabien Roy.

Had he done that, his minority government would not have fallen. According to Peter Brimelow:

Tory Prime Minister Joe Clark's government was in a minority and could have used Creditistes support, but instead Clark was blindly hostile to them, convinced that if they "faded in Quebec their supporters would find a new home with the Conservatives." He was wrong, of course. In the 1980 federal election, they actually voted for the Liberals - "a party more deeply rooted in French-Canadian society than the Conservatives." (2)

But in his defense, he had no stomach for joining with a party that had become "a refuge for right-wing 'fringe' elements".

The party's nadir occurred in 1983 when its provincial vice-president, Jim Keegstra, was found guilty on charges of spreading hatred against Jews. By the early 1980s, Social Credit remained a power only in British Columbia. (1)

But there was a rumble.