The Difference Between Liberals and Conservatives is Found in Their Victims 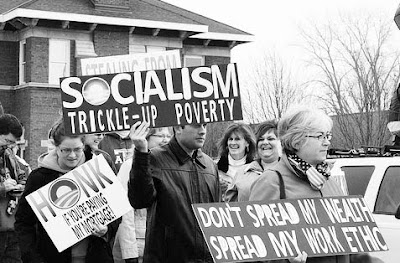 Bill Maher commented a couple of weeks ago that to him the difference between liberals and conservatives, is that conservatives lack the ability to feel empathy for anyone else.

I think that sums it up nicely.

And I don't mean the original conservative party in Canada, who had a social conscience, but the new definition of a conservative*.

What do they protest?

Don't touch my guns. Don't raise my taxes. Keep out of my business.

And there is such a profound hatred for their fellow human beings. Gays, Muslims, feminists, immigrants ... white Judea-Christians sit here, everyone else to the back of the bus.

And they dismiss those fighting for social causes as being "special interest" or "Left-wing fringe groups."

But what do liberals* protest? Poverty, homelessness, injustice. And most of the protesters who march are not poor or homeless and have never been the victim of injustice. But they have the ability to empathize.

I know right off the bat there will be many calling themselves conservative who would refute this by saying that they give to the food bank, volunteer at soup kitchens, etc. but that does not change the fundamentals of the movement.

Conservatives want all charity to be handled by religious organizations, but that just feeds their egocentricity, because it puts them in control of people they believe are beneath them.

And it is this that AstroTurf organizations are feeding off, and it is how they have so easily been able to take control of the right-wing, conservative movement.

When Barack Obama signed the American Recovery and Reinvestment Act into law, he said "We must stem the spread of foreclosures and falling home values for all Americans, and do everything we can to help responsible homeowners stay in their homes." Foreclosures in the U.S. are of epidemic proportions, so the reason for this was to help those who needed it most.

The backlash from the right was immediate. Bailing out corporations was fine, but Obama wanted to bail out ordinary Americans. Americans without jobs. Americans with few prospects.

So they took to the streets. But not on their own. An organization dubiously called FreedomWorks, set up a website called AngryRenter.com. They claimed to work for "prudent renters" outraged over the government bailout for "irresponsible homeowners".

But as Michael Phillips of the Wall Street Journal discovered, this group were not renters, nor was this a spontaneous uprising.

AngryRenter.com is actually a product of an inside-the-Beltway conservative advocacy organization led by Dick Armey, the former House majority leader, and publishing magnate Steve Forbes**, a fellow Republican. It's a fake grass-roots effort -- what politicos call an AstroTurf campaign -- that provides a window into the sleight-of-hand ways of Washington. (1)

And Republican Dick Armey and his FreedomWorks, is also behind the current Tea Party movement. And what they have been able to do is nothing short of a miracle.

They have been able to turn public anger away from the corporate hand outs and toward the victims of the economic meltdown. Wall Street was not responsible. Workers were. Lazy Americans were. Too many demands.

Read the signs above carried by a group of Tea Partyers. "Honk if you're paying my mortgage". "Don't spread my wealth, spread my work ethic". If they were really concerned with these issues they would demand that more be done to find work for those falling behind. You can't spread "work ethic" without first spreading "work".

But these protesters lack the ability to empathize. They can only flaunt.

Glen Beck tells them to ignore Obama when he claims that all Americans deserve a piece of the pie. He wants to keep all of his pie.

They are creating a culture of greed.

And that is how we must frame the next election campaign. The difference between liberals and conservatives is just that simple.

Michael Ignatieff wants to put an end to the corporate tax cuts. Jack Layton has always opposed them and Elizabeth May wants to roll them back.

"Experience demands that man is the only animal which devours his own kind, for I can apply no milder term to the general prey of the rich on the poor." Thomas Jefferson

*When I mention liberal and conservative I am not referring to political parties, only values.

**Steve Forbes is also on the board of directors for a group called the Foundation for the Defense of Democracies. According to SourceWatch:

In early 2001, a tightly knit group of billionaire philanthropists conceived of a plan to win American sympathy for Israel's response to the Palestinian intifada. They believed that the Palestinian cause was finding too much support within crucial segments of the American public, particularly within the media and on college campuses, so they set up an organization, Emet: An Educational Initiative, Inc., to offer Israel the kind of PR that the Israeli government seemed unable to provide itself.

Another member of that group is Alykhan Velshi, who is currently Jason Kenney's Director of Communications and Parliamentary Affairs.

1. Mortgage Bailout Infuriates Tenants (And Steve Forbes) 'Angry Renter' Web Site Has Grass-Roots Look, But This Turf Is Fake, by Michael Phillips, Wall Street Journal, May 16, 2008
Posted by Emily Dee at 10:46 AM