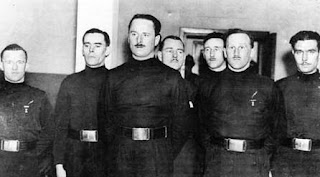 Sir Oswald Ernald Mosley, 6th Baronet, was a member of the British Parliament, elected first as a Conservative.

But driven by the threat of Communism, that had already caused the deaths and exodus of most members of the Russian royal family, Mosley saw fascism as the best solution. Only a strong leader and centralized power could stand up to a Bolshevik revolution, and he started the British Fascist Party, often referred to as the Black Shirts.

Mosley's party also embraced social credit and the anti-Semitism that often went along with it.

Some contemporary authors have suggested that he was not anti-Semitic, but news articles of the day, dispute that claim.

No. 1 British Fascist Sir Oswald Mosley ... announced weeks ahead that 5,000 of his Blackshirts would march through the tortuous streets of London's Jewish quarter east of the Tower. This was interpreted by Jews and workers alike as a challenge to battle ... The Home Secretary, Sir John Simon, strove to uphold British rights of freedom to demonstrate, but he thought it necessary to cancel all police leaves and send 10,000 Bobbies to keep order in East London.

Too late to avert the riot, Commissioner of Metropolitan Police Sir Philip Game informed Sir Oswald that mobsters were getting out of hand and the 5,000 Fascists could not be allowed to march. In a closed car, the windshield of which was quickly smashed by a paving stone, the Fascist leader rushed to his lined-up Blackshirts, yelled "Sir Philip has banned the march!" ... Sir Oswald Mosley's ungrateful cohorts dispersed jeering: "Jewboy Simon's got the wind up!" (1)

Jews considered that Sir Oswald in the windup of his speech touched a new high in British antiSemitism. He twitted the Conservative Party for "following the ideals of Disraeli, an Italian Jew,''— lambasted British Socialists (i. e. Laborites) for their "loyalty to Karl Marx, a German Jew" and polished off the Liberal Party by referring sarcastically to one of its Jewish leaders as "that staunch John Bull, Sir Herbert Samuel!" (2)

Oswald Mosley would help Aberhart with his Alberta Social Credit Chronicles, by contributing columns (3), and was the inspiration for other Canadian movements at the time, including the Canadian Union of Fascists.