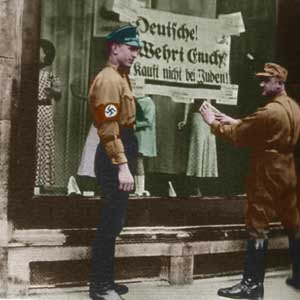 William Aberhart would not have been a supporter of Adolf Hitler, and he would never have condoned the Holocaust.

But his Socreds were part of a broader populist movement, that spread across the Western Hemisphere; in the period between the Great War and the Depression.

A fierce sense of nationalism, had justified the horrendous actions of war, so it is easy to understand why some of these groups would want to adopt a uniform; to renew that nationalistic fervour.

In Great Britain, there were "Blue Shirts", "Black Shirts" and "Green Shirts". There were also "Black Shirts" under Mussolini in Italy and of course the infamous "Brown Shirts" of Adolf Hitler.

And while Aberhart never worked with Hitler himself, he did have the support of John Hargrave; founder of the "Green Shirts", and Oswald Mosley; founder of Britain's fascist "Black Shirts".

Mosley was indeed a Hitler supporter, right to the end; and he also provided columns for Aberhart's Social Credit Chronicle. Another contributor to the paper, was Father Coughlin, who was also a huge Hitler fan, and was known to regularly give the Nazi salute.

Another thing shared by these populist movements (with the exception of the blueshirts), was the notion of a Jewish conspiracy, as laid out in the Protocols of the Elders of Zion. It's unfortunate that there wasn't an actual Jewish conspiracy, because they may have been able to better mobilize against this hatred.

Though the term Nazi has become the definitive name of the party of Adolf Hitler, it was not a name taken by them.

They were more commonly referred to as the Brown Shirt Fascist Party or formally known as the Nationalsozialist (National Socialist) Party.

'Nazi' was a derogate term, given them by journalist Konrad Heiden, who led university students in protest against them. It is actually a Bavarian slang word, meaning "country bumpkin."

Early news stories used Fascist Brown Shirt or National Socialist, and when they did refer to them as 'Nazi', the name was always in quotations. So I guess the term 'Neo-Nazis', actually translates to 'new country bumpkins'.

I would never call them that though. Not to their face anyway.
Posted by Emily Dee at 9:16 AM