Roger Douglas and the Frontier Centre for Public Policy 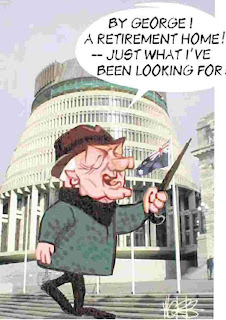 I want to pay particular tribute to Peter Holle. I’ve known Peter for a long time. I appreciate his leadership, not just in organizing this event today, but also in providing me his advice over many years, and in giving the strong direction behind the growth of this institute. Stephen Harper (1)

In the Acknowledgements to the book, Unfinished Business, Roger Douglas writes; "I am also grateful to Peter Holle from Canada for his observations." (2)

Peter Holle is the founder and president of the Frontier Centre for Public Policy, a western "think tank", that claims to be non-partisan, but would appear to be just part of the infrastructure of the far right movement.

This is a list of their Advisory Board members and you will see that one of those members is Roger Douglas, the man who turned New Zealand inside out with his horrendous slash and burn polices. From FPP:

Sir Roger Douglas was Finance Minister in New Zealand's Labour Government from 1984 to 1988. Sir Roger was responsible for one of the most comprehensive restructuring program ever attempted by a government anywhere. The program included cutting income tax rates in half, deregulating wide sectors of the New Zealand economy, ending farm and business subsidies, and restructuring and privatizing most state owned enterprises. Most significantly, Sir Roger overhauled the operating philosophy of government agencies and departments to make them run as competition-oriented, bottom line business enterprises that are fully accountable for resources they receive from taxpayers. Sir Roger retired from politics in 1990 and now operates an international consulting firm based from Auckland, New Zealand where he lives. In 2008 he was re-elected to the New Zealand parliament with the party he founded, the Association of Consumers and Taxpayers.

Sounds good. But they fail to mention the devastation his policies created.

Douglas was also the driving force behind Ralph Klein, Mike Harris, Stephen Harper and Preston Manning, and it would appear that he is still helping to shape neoconservative policy.

The FPP was founded by Peter Holle, the man who according to Harper himself, provided him with advice over the years. He also assisted Roger Douglas with his book Unfinished Business.

The Centre claims to nonpartisan, so that they can operate as not for profit, allowing them to accept donations without paying taxes, while they prop up the Reform-Conservative government.

According to Source Watch, with information provided on the FPP site:

"Independent think tanks receive their funding exclusively from non-governmental sources. This insulates them from the political pressures that frequently discourage publicly funded research groups from exploring sensitive issues," the think tank's website states. "The Centre does not accept any funding from governments to maintain its independent and fresh perspective on public policy," it states. In 2008, 10% of the think tank's funding was from corporations with a further 67% from unspecified foundations.

It is believed that much of the corporate funding they mention, is from the oil and gas sector. And according to Tasha Kheiriddin and, Ontario Director of the Canadian Taxpayers Federation, and Adam Daifallah, a member of the National Post editorial board; one of the foundations that provided seed money and future capital, was the Donner Foundation.

Because private money is so scarce in Canada, even a small reduction in funds can have an important impact on the well-being of the conservative cause. Such is the case with the Donner Canadian Foundation, the lifeblood of conservative research in this country. A decade ago, with a mission to “encourage individual responsibility and private initiative to help Canadians solve their social and economic problems,” and an annual giving budget of over $5 million, the Donner made a huge difference. From 1993 to 1999, under the leadership of executive directors Patrick Luciani and Devon Cross, it provided seed money to start a host of topnotch free-market think-tanks across Canada: the Atlantic Institute for Market Studies, the Montreal Economic Institute, the Frontier Institute, the Society for Advancing Educational Research (dedicated to promoting charter schools), the conservative The Next City magazine (now defunct), and Energy Probe (a free market–oriented environmental organization). (3)

The chairman of the Donner Canadian Foundation is Allan Gotlieb. Both Gotlieb and Harper were guest speakers at FPP's 10th Anniversary, $ 150.00 a plate, gala. The Winnipeg Labour Defense League, protested at the Frontier Centre during this event, because of FPP's promotion of damaging policies, including:

... privatized child-care; a frozen minimum wage; privatized utilities for Hydro and Water; a "flat tax" where those with lower incomes pay the most; even more tax cuts for the wealthy and corporations; no pay equity for women or other discriminated groups; no marketing boards such as the Wheat Board to protect farmers and consumers from the big Agri-monopolies. (4)

So if the Donner Canadian Foundation is the "lifeblood of conservative research in this country" and Donner provides funding to the FPP; remind me how they are not partisan.

Should they really be allowed to operate as not for profit, or have to declare themselves a third-party advertiser for the Conservative Party of Canada? I think you already know my answer.

1. Address to the Frontier Centre for Public Policy, by Stephen Harper, MP Leader of the Conservative Party of Canada, Leader of the Opposition, May 17, 2004