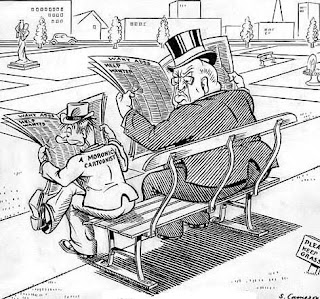 With the election over and the tours done, it was now time for William Aberhart to settle down and start taking care of business.

Since he had come to power on the promise of $ 25.00 dividends for every "bona fide" citizen of Alberta, the pressure was on to deliver and the media was relentless.

Naturally they never really believed it, or social credit was possible anyway, so most reports were not flattering.

In Alberta it was freely predicted that Messiah Aberhart will never be able to make Social Credit work unless he makes himself a Dictator.

Canadian jurists meanwhile believed that Social Credit as proposed in the Province of Alberta is "contrary to the North America Act" which is the fundamental law of Canada's Constitution.

... "They say what we propose to do is unconstitutional!" he snorted. "Just because an old paper was signed in the past doesn't say we can't do this. The British North America Act is a fool act. We can do what we want! (1)

He really hadn't thought it through in his desire to get elected.

Beginning in 1931, Times Magazine had begun to dramatize some of their news stories, called The March of Time and on August 28, 1935; they reenacted the story of none other than William "Bible Bill" Aberhart.

This is how they billed it: A socialist has been elected to head the Alberta, Canada government. He plans to pay all citizens $25 per month. (A 'socialist'? Oh, my! )

Now I don't know who played his part, though two of the male 'voices' under contract at the time were Orson Welles and Art Carney. I see William Aberhart as more of an Orson Welles myself.

In Major Douglas's First Intrim report, he suggested that the first thing Aberhart should do is buy a newspaper, so he could control his own press. So he purchased the Albertan and with it came the radio station CJCJ, and though he feigned surprise that the new owner of these media outlets was the Alberta Social Credit League, he had backed it all the way.

And in another move, he decided to sell shares and announced their sale over his religious radio broadcasts, something that did not sit well with many who believed that the sabbath was for a holier purpose.

He also announced to the press that he would decide when and if he provided them with information, something that did not sit well with them, and there were many who wondered if they were going to see another Goebbels.

Without crudely borrowing the name of Germany's "Ministry of Propaganda & Public Enlightenment," Premier Aberhart announced that Alberta Government news will hereafter be "dished out in platters" by a bureau with exclusive monopoly of statements from the Premier & Cabinet so that ''there will be no more scoops." .... According to Alberta reporters they are going to be stuffed with Aberhart press handouts, barred from ferreting out real news. (1)

But he was just getting started.