From Reaganomics to Rogernomics: The New Zealand Invasion 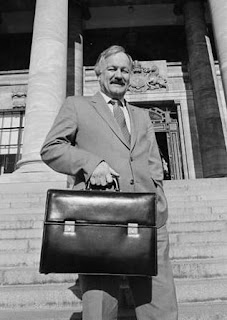 Two events would take place in 1984, that would change the course of Canadian politics for a very long time.

One was on July 26 in New Zealand, when the Labour Party came to power under David Lange, and he would name as his finance minister, Roger Owen Douglas.

Douglas had a long history with the Party. Both his father and brother had been elected members of parliament, and he himself had served since 1969.

The other occurred on September 17, when Martin Brian Mulroney would win the largest majority in Canadian history, under the banner of the Progressive Conservatives.

These two seemingly different events, would have a profound effect on the career of a future politician: Stephen Joseph Harper.

Apparently while growing up in Toronto, Stephen Harper's family regularly discussed politics, so when he moved to Calgary he opted to become involved. At the time he was dating a girl, Cynthia Williams, and they decided to volunteer in the offices of Jim Hawkes, Progressive Conservative MP for Calgary West.

"At the (town hall) meeting they were among the few young people in attendance ... Steve in particular was disgusted with the Liberal government ...
My recall is that he did not know very much about the organized political party aspect of politics ... he had concerns about the policy part of politics. They (Steve and Cynthia) joined the association. Then the next thing I knew, they were working within my riding association as volunteers, and members of the executive." (1)

Harper and his girlfriend would help out with Hawke's campaign and recruited many young members from the University of Calgary, where he was studying economics. One of those was a young man named John Weissenberger, who introduced him to the neo-conservative policies of William F. Buckley.

After the PC victory, Harper joined Jim Hawkes in Ottawa as his legislative assistant, working on UI reform (UI, Unemployment Insurance was the forerunner to EI), that never materialized. He soon became disillusioned, stating that Mulroney did not have the nerve to make the necessary "tough choices" and returned to school in Calgary. In a later speech at the founding of the Reform Party, Harper would call for an end to "... government financial involvement in the unemployment insurance system..." (2)

Western Canada played a huge role in Mulroney's electoral success, based on their anger over the National Energy Program.

The NEP, introduced in 1980, was designed to protect Canada's natural resources from foreign investors, and to ensure that all Canadians could purchase oil at reasonable prices. However, 5 out 0f 7 oil companies in the west were owned by Americans, so the backlash was loud and immediate. These large multinational interests, were also backed by then U.S. President Ronald Reagan, a man who would be a huge inspiration to Harper throughout his career.

Another founding member of the Reform Party, was Ted Byfield; owner of the Alberta Report. To give some sense of Western anger, he wrote in a column:

"In the course of the conflict between the Reagan administration and Ottawa, we Albertans are expected as loyal Canadians to cheer the victory of Mr. Trudeau and his thug government. Some of us will find this very hard. We will wave the flag, of course. But deep in our hearts we will be hoping that the Americans whip the hell out of him." (2)

Though the Labour Party had always been left wing, the new Prime Minister David Lange, had caught the Libertarian bug, after viewing the radical changes made by Ronald Reagan. He became committed to the ideological framework of the 'Chicago school', that produced heavy weights like Paul Wolfovitz and Milton Friedman, Reagan's economic advisor.

The 1984 transition was no ordinary change of government. In common with its northern hemisphere relatives in Britain and America, New Zealand's Labour ... coalition (including organized business, ruling parties, and key state agencies)launched assaults upon the entire state structure, seeking no less than its basic transformation ... the political machine had to be "captured", the technocrats "empowered", and the new regime "embedded" so that it could not be
easily reversed. (3)

The Chicago school was more than just about monetary reform, but a complete philosophical approach to governing, developed by a man named Leo Strauss, who would become the father of the neoconservative movement.

Leo Strauss meets Ronald Reagan, meets Roger Douglas and Canada; to paraphrase Ted Byfield; was on the road to getting the hell whipped out of it.

* Lies and Videotape Help to Pave Canada's Road to Neoconservatism

* How Roger Douglas Became a Friend of Science

* Roger Douglas and the Frontier Centre for Public Policy