From Douglasite to Opus Dei and it Only Took 63 Years! 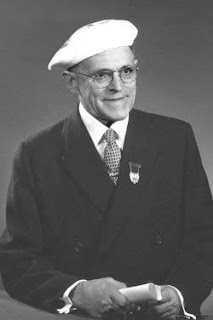 Louis Even was an early and devout follower of Social Credit. After learning of Major Douglas' theories, he read everything he could on the subject, eventually founding the Quebec wing of the movement.

A devout Catholic, he had left France in 1903, when the French government began putting laws into place that would separate church and state.

Eventually settling in Canada, he would be responsible for establishing several extreme right-wing groups, including the White Berets of the Pilgrims of Saint Michael. (1)

I've read a bit on this organization, and they appear to do a lot of good work. However, they are also on the fringe of the Catholic church:

Gradually, the White Berets became a marginalized and increasingly radical religious movement within the context of Quebec’s burgeoning “Quiet Revolution”.

In The smoke of Satan: conservative and traditionalist dissent..., by Michael W. Cuneo, he states that the group believed that Satan, working through the Illuminati, was controlling the world's finances and were leading us toward the Apocalypse.

Definitely, a variation of Even's original beliefs, that it was a Jewish conspiracy that threatened to take over the world; one shared with many members of his party.

In the disturbing story of Roch Theriault, we get another glimpse of this group, though it may not be typical:

His father was a supporter of an ultraright Catholic fringe group known as the "White Berets". As a teenager, a neighbor recalls Roch and his three brothers would play a game called "bone" with their father. "They would sit at the kitchen table with their heavy boots on and kick each other's shins until one of them gave in."

In 1947, then Alberta Premier, Ernest Manning, initiated a purge of what were referred to as the Douglasites of the Social Credit Party. But at as Janine Stingel points out, it was more of a political move then a humanitarian one.

This group had been putting pressure on Manning to adopt the Socred economic theories, which the Premier refused to do. In fact he stated that from there on in, that notion was dead.

Louis Even was one of the men removed from the party at the time. He would continue with his anti-Semitic message for several years, before apparently taking a different direction.

Catholic Fringe Groups and the Conservative Party of Canada

The Pilgrims of St. Michael still promotes Social Credit, from a Catholic perspective, and lobby government to adopt the principle to create a Christian world.

So while St. Michael claims to be non-partisan, only devout Social Creditors, there seems to be an increasing number of these Christian extremist groups entering the political arena, and attaching themselves to the Conservatives, including the Opus Dei.

During the 2008 election campaign, it was revealed that one of their Quebec candidates , Nicole Charbonneau Barron, was a member of this controversial, ultraconservative Catholic sect, whose members practice self-flagellation.

However, as Elizabeth Thompson revealed, Barron was not the only Conservative Party member who is actively involved with this obscure group:

Kara Johnson, a member of the Conservative Party’s national candidate selection committee and the party's national council, one of the party’s highest decision making bodies, also has connections to the sometimes controversial group.Kara Johnson lives on Avenue Road in Toronto at Lancemore which is listed on Opus Dei’s website as one of its locations across the country.

She taught for several years at the Hawthorn School for Girls in Toronto, an independent Catholic school which says on its website that Opus Dei provides a priest to give the school spiritual assistance. Johnson, who describes herself on one website as a Montreal native raised in Etobicoke, also studied theology and philosophy with Opus Dei in Rome.On Opus Dei’s website she is listed as a speaker at a conference in 2003. At that point she was director of character education at Hawthorn School.

And according to Canada News Wire, Nicole Charbonneau Barron, will be running again.

Now a person's religious beliefs are personal and if whipping yourself is part of that, it's none of my business. But what is my business are the number of Christian extremists entering this Party.

Opus Dei, like the White Berets, have clear views on things like homosexuality, same-sex marriage and abortion. The Catholic Civil Rights League, a group that Jason Kenney is involved with, also share these beliefs.

Once these people enter the political arena they can no longer hide behind their religion. They must come clean about whether or not they can separate themselves from their beliefs, and govern based on the wishes of the majority of Canadians.

Since the media refers to the Harper government as Tories, people have become complacent, believing they are a nice middle of the road party. But nothing could be further from the truth.

They still hold the same ideology as William "Bible Bill" Aberhart, whose government Time magazine referred to in 1936, as the only true theocracy in the Western Hemisphere.

History is about to repeat itself, if we don't wake up. Canada is a diverse country with vast spiritual beliefs. We need to remember that and honour it.

2. The Pilgrims of St-Michael: Charisma at the Crossroads, Martin Geoffroy, University of Moncton
Posted by Emily Dee at 10:56 AM