In April of 2006, Time Magazine ran an article entitled Controlling The Message.

George Bush was in his sixth year as President of the United States and most Americans now realized that under Bush they had all but lost their personal freedoms, and were in the process of fighting to get them back.

But the Time article was not about George Bush.

Nor was it about Donald Rumsfeld, Dick Cheney or even Ari Fleischer.

It was about Stephen Harper.

Four years ago, Time Magazine recognized that what was happening in Canada was troubling and newsworthy.

They spoke of secret cabinet meetings, and while legally the government must announce these, Harper would wait until the meeting was well underway before meeting his legal obligations. And in describing one of those announcements:

...the veiled wording of the advisory--"There will be a Government media availability, today in the foyer of the House of Commons"--was almost Soviet in
its stiff obfuscation. (1) (my emphasis added)

"Canadians should be worried when they see the government trying to exert such an unprecedented level of control." ... Alasdair Roberts, a Syracuse University public-policy professor, asks, "How can the average Canadian make a judgment about whether their government is being well run if they don't have access to the information?"

...Peter Murdoch of the Communications, Energy and Paperworkers Union says the new policy "smacks of totalitarianism." (1)

When Adolf Hitler was first named Chancellor of Germany he had limited powers imposed by President Von Hindenburg, but Joseph Goebbels wasted no time. He immediately seized control of all newspapers and other media outlets. He had been named Minister for People's Enlightenment and Propaganda and set up office in the Leopold Palace on Wilhelmstrasse, just across from Hitler’s offices in the Reich Chancellery. As one fan of Gobbels put it:

It takes only five minutes to walk from Postdamer Straße 109 in Berlin to the Wilhelmplatz. Five minutes from the more than modest first business office of the newly-named National Socialist Gauleiter of Berlin, Dr. Joseph Goebbels, to the Leopold Palace, the current headquarters of the Reich Ministry for People's Enlightenment and Propaganda. It took Dr. Joseph Goebbels six and one half years to cover the distance.

The official building he took over, the old Leopold Palace, had long been the seat of the Press Office of the Reich government. It was dark and musty. Dark carpets and curtains carried the dust of years. ... After Dr. Goebbels had been in office for a few days, the dusty old hangings had been removed from the majority of the rooms, and simple, but friendly furniture filled bright rooms. When Dr. Goebbels spoke for the first time to representatives of the German press in the Garden Room of the Leopold Palace, no one failed to see that the evil spirit of a press hostile to the people had been forever driven out. (2)

Until bombed during the war, that would be propaganda central for the Nazi government, where everything from literature, music, film, radio, newspapers - all media and entertainment, would be controlled. 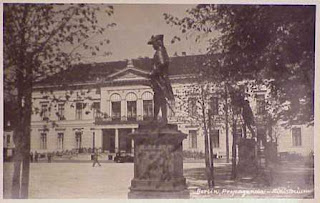 In 2007, Tonda MacCharles in the Ottawa Bureau of the Toronto Star, unearthed secret plans for a special media centre, dubbed the "Shoe Store Project". At the time Harper's staff had been working quietly, to restore an old shoe store into a controlled environment for government messaging.

The Prime Minister's Office, which has long had a rocky relationship with the national media, has been working on a secret project to build a new, government-controlled briefing room at the cost of $2 million, documents obtained by the Star show. ... The result would be a little fancier than the National Press Theatre and, most important, give the PMO a lot more control over who gets in and, quite possibly, what gets filmed and broadcast....

Since the Conservative government's relationship with national media is already fraught with tension over curtailed access to ministers and Harper, the project was clearly deemed highly sensitive ... A hand-drawn sketch of the PM's renovated shoe store/press theatre indicates a space for "maybe permanently installed cameras with feeds to media."That could put the news cameras in the hands of government-employed camera operators, not independent photojournalists
employed by the television networks. (3) (Emphasis mine)

Once the media got wind of the project it was axed, but now just a few short years later, the PMO staff are taking their own photographs, writing their own copy and creating their own video. Messrs Goebbels and Hitler would be impressed.

Matthew Brett of Global Research is not:

Not surprisingly, the Globe and Mail and other news organizations ran a press release from the PMO's office verbatim, with no critical commentary, analysis or insight. The state of media today is such that copy-pasting a press release from the PMO and slapping it on the front page of a national daily newspaper is accepted practice. Indeed, Conservative strategist Tom Flanagan writes that “compared to most countries with which I have any familiarity, the Conservatives in Canada actually have friendly media to work with.” The ‘Propaganda Model’ is more than alive and well, but sometimes without even bothering to ‘filter’ news content. (4)

"His full conquest of the masses came only after [he] had silenced oppositional opinion and had acquired total control of the media." Konrad Heiden of Adolf Hitler

This is the last entry of this little interlude, and I will now return to the history of the Reform-Conservative movement. However, I will have a lot more on this subject later in the book.