How Roger Douglas Became a Friend of Science 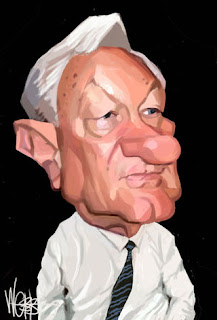 As I have been telling the story of Roger Douglas and his influence over the neoconservative movement in Canada, some might believe it's ancient history.

However, Douglas is still very much involved with the Harper government, as an advisory board member of the Frontier Centre for Public Policy.

According to Policy.ca, they are:

... an independent think tank that received charitable status in April 1999. Its mission is “to develop and popularize policy choices that will help Canada’s prairie region live up to its vast but unrealized economic potential.” The Centre is non-partisan and receives its funding from non-governmental sources. The Centre communicates its research and ideas through policy notes, backgrounders, commentaries, lectures and presentations, the media, and research reports.

Of course they claim to be non-partisan, when it fact they are just part of the infrastructure of Canada's only extreme-right party, now calling themselves the Conservative Party of Canada; but formerly known as Social Credit, the Reform Party and the Canadian Alliance.

Another member of the advisory board, is Dr. Timothy Ball, one of Canada's more notorious climate change deniers, and a "scientific advisor" to the Friends of Science.

Roger Douglas is also an outspoken critic of money going to what he refers to as "so-called" global warming.

So let's break down this non-partisan group.

On Sherwin Arnott's blog, he discusses meeting Dr. Ball and discussing global warming with him. But when Arnott questioned his theories, Ball called him a Socialist. This immediately peaked his interest so he asked the good Dr. if he worked for the Fraser Institute. He denied that he did and immediately walked away.

But a quick search proved that he was lying:

Turns out that Tim Ball is paid by the Friends of Science that is funded through the University of Calgary Science Education Fund, set up by Barry Cooper who is friends with Stephen Harper, which is funded by the Oil patch. He’s also connected to the National Resources Stewardship Program, Tom Harris with APCO Public Relations, High Park Advocacy Group, Canadian Gas Association and the Canadian Electricity Association. He’s effectively a paid mouthpiece with fewer credentials than he and the Fraser Institute claims he has. But I met him and he’s quasi famous and so I guess I met an almost famous guy! And I made him. That was my moment of glory.

Last spring, the Winnipeg Labour Defense League, protested at the Frontier Centre, where a guest speaker would be making a presentation at a $150.00 a plate dinner. The speaker's name was Stephen Harper.

On May 19, dozens of people responded to a call from the newly formed Winnipeg Labour Defence League to protest the latest visit to the city by Stephen Harper. The Prime Minister was the star speaker at a gala fundraising dinner for the Frontier Centre for Public Policy.

... The FCPP wants: privatized child-care; a frozen minimum wage; privatized utilities for Hydro and Water; a "flat tax" where those with lower incomes pay the most; even more tax cuts for the wealthy and corporations; no pay equity for women or other discriminated groups; no marketing boards such as the Wheat Board to protect farmers and consumers from the big Agri-monopolies.

The FCPP has a special place for Aboriginal peoples. In a racist way, it constantly attacks "poor governance" in Aboriginal nations, forgetting the truly massive scale of corporate sleaze and corruption. Failing to recognize the colonial theft of Aboriginal land, it promotes the illusion that Aboriginal peoples are on a level playing field with the non-Aboriginal corporations that own and dominate Canada's land and resources. It attacks the very concept of `national rights,' rights which are fully enjoyed by the Canadian state, but whose denial relegates Aboriginal nations to a position of inequality, humiliation and subjection ... (2)

The Globe and Mail would eventually uncover the fact that this group is actually funded by the oil companies, including Imperial Oil, where Harper's father worked. And their list of members reads like Stephen Harper's Christmas card list.

But if that wasn't bad enough, Harper also named two prominent climate change deniers to his science board:

Already alarmed over funding cuts to basic research, scientists say two appointments in particular are worrisome. Mark Mullins, the executive director of the conservative-leaning Fraser Institute — and a former adviser to the Canadian Alliance Party — was recently appointed to the Natural Sciences and Engineering Research Council of Canada (NSERC), which funds university research projects that have included studies on climate change.

Dr. Mullins is an economist and critic of the Intergovernmental Panel on Climate Change, the United Nations-sanctioned scientific body that has authored warnings of floods, famine and extinctions that triggered political efforts around the world to reduce greenhouse-gas emissions.

... On the same day Dr. Mullins was appointed to NSERC, April 23, another skeptic of global warming was appointed to the board of the Canada Foundation for Innovation, which funds large research projects. John Weissenberger is a close friend of Prime Minister Stephen Harper, a former chief of staff in the Harper government and a geologist who works for Husky Energy in Alberta.

Dr. Weissenberger has written opinion pieces in the media and on his Internet blog expressing his "skepticism about global warming." That and other comments by the two appointees on the public record were compiled by NDP researchers and verified by The Globe and Mail. (1)

I've mentioned John Weissenberger before. He and Harper go back to their days at the University of Calgary, when they both worked on the re-election of Jim Hawkes, for Calgary West.

Roger Douglas must be so proud.

1. Global warming critics appointed to science board, by: Bill Curry, Globe and Mail, May 11, 2009