Controllong the Ignorant Masses With Leo Strauss and Homiletics 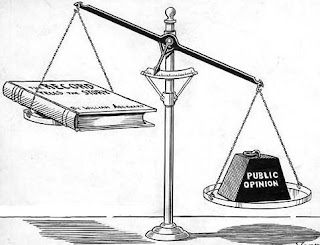 William Aberhart never followed the teachings of Leo Strauss. As an orthodox Jew, Strauss would not have cared much for Social Credit either.

But Stephen Harper is a follower, as are many in the neoconservative movement.

What do close advisers to Stephen Harper and George W. Bush have in common? They reflect the disturbing teachings of Leo Strauss, the German-Jewish émigré who spawned the neoconservative movement.

Strauss, who died in 1973, believed in the inherent inequality of humanity. Most people, he famously taught, are too stupid to make informed decisions about their political affairs. Elite philosophers must decide on affairs of state for us. (1)

We can't say we weren't warned.

One of the basic elements of Strauss's teaching, is to tap into religious fervour. When Harper spoke to the Civitas society in 2005, Marcie MacDonald, author of the book The Armageddon Factor; was there and reported that:

... he outlined plans for a broad new party coalition that would ensure a lasting hold on power. The only route, he argued, was to focus not on the tired wish list of economic conservatives or “neo-cons,” as they’d become known, but on what he called “theo-cons”—those social conservatives who care passionately about hot-button issues that turn on family, crime, and defence ...Arguing that the party had to come up with tough, principled stands on everything from parents’ right to spank their children to putting “hard power” behind the country’s foreign-policy commitments ..." (2)

Gutstein reports on the same meeting:

The state should take a more activist role in policing social norms and values, Harper told the assembled conservatives. To achieve this goal, social and economic conservatives must reunite as they have in the U.S., where evangelical Christians and business rule in an unholy alliance. Red Tories must be jettisoned from the party, he said, and alliances forged with ethnic and immigrant communities who currently vote Liberal but espouse traditional family values. This was the successful strategy counselled by the neocons under Ronald Reagan to pull conservative Democrats into the Republican tent.

Movement towards the goal must be "incremental," he said, so the public won't be spooked. Regime change, one step at a time. (1)

These people are some of the 'advisers' to Stephen Harper.

While I'm beginning to have my doubts that Stephen Harper is religious at all, there was never any doubt about "Bible Bill". He was always completely up front about controlling his flock with the fear of God and the spell of homiletics.

The latter is nothing sinister, and the rules could apply to anyone whose career involves public speaking. But if Stephen Harper wanted to learn how to control, what Strauss referred to as the "ignorant masses", he needn't look any further than the first leader of his movement, William Aberhart, who had it down to a science.

A speaker with a good personality has charm, power and attractiveness. Such a personality is said to be MAGNETIC, because it consists of personal attributes which draw people to the speaker and incline them to sympathize with or rally around him. This magnetism or attractiveness resides in the speaker irrespective of what he is saying ... It is an attitude of trustfulness and cordiality towards the audience. The speaker approaches his hearers with a confiding air and treats them as his friends. If the audience can be made to feel the speaker's genuine cordiality, the very atmosphere will vibrate with stimulating good feeling. (3)

The difference with Aberhart, was that he genuinely cared about the well being of the citizens of Alberta. For Stephen Harper, he cares only about his agenda, which is becoming more alarming by the minute, as it is being revealed.

I have always called this a 'movement' and not a party, which was recently confirmed by Reformer Rob Anders. When it was learned that he, Jason Kenney and Stephen Harper had transferred money from their ridings to cash strapped Ontario ones, he stated: "If people are true movement-oriented Conservatives, then it makes sense they would support those candidates and show up and support them and cut cheques."

Let's hope the final chapter of my book is not that the movement achieved it's goals, but that the Canadian people finally became "spooked", no matter how "incremental" their steps were, and threw the bums out.

* The Price of Peace and Freedom is Chaos and Oppression