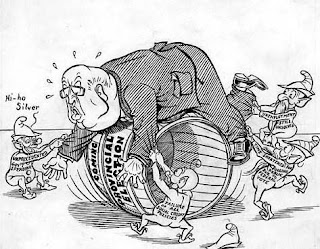 Canadians will see it for what it is, an unethical, illegal, unconstitutional -- and clearly desperate -- gambit by Brian Mulroney, Belinda Stronach, Toronto's Bay Street and Calgary's Oil Patch to try to force Canadians into a narrow, far-right social and economic ideology for which they repeatedly and emphatically say they have no taste. (Frances Russell - Winnipeg Free Press, 21 October, 2003)

What Russel was referring to, was the takeover of Canada's traditional Conservative party, by a religious-political crusade, that had it's roots in depression era Alberta.

Beginning in the 1930's as the Social Credit party, the movement's history was defined by religious fervour, extremism and an anti-government stance, with an 'us' against 'them' mentality.

Given Albertans' antipathy to traditional parties, this was crucial. By portraying itself as a non-political movement, Social Credit not only evaded political scrutiny until it had permeated the existing political framework, but it also offered Albertans a new message of religious hope and the promise of economic and political redemption. (1)

Pundits often express surprise over Stephen Harper's actions, but it is simply because they are trying to view him through the Conservative lens. However, his party did not emerge from the party of Sir John A. MacDonald, but rather from that of William 'Bible Bill' Aberhart, the founder of the Canadian Social Credit movement, which began as a crusade to use Christian fundamentalism to solve Alberta's financial woes:

For many Albertans the Social Credit crusade offered a way out of their desperate circumstances. Farmers saw a new movement that would ameliorate their economic problems through radical monetary reform, which the UFA had refused to implement. Others saw Social Credit as an alternative to the socialist CCF. Some saw it as a return to popular democracy, led not by an old-line politician but by a preacher. Thus, through the medium of a religious-economic crusade, Social Credit became a political party. (1)

When the Reform Party of Stephen Harper and Preston Manning first hit Parliament Hill, they changed the face of Canadians politics, and not for the better.

Don Newman, long time political observer and veteran of the CBC's parliamentary bureau, wrote a piece recently: Stephen Harper and the politics of suspicion. He reflects on his two decades covering federal politics, after attending a Canadian Association of Former Parliamentarians dinner.

It was an opportunity for former MPs who hadn't seen each other in a number of years to reconnect and catch up on what everyone is doing. It also reminded many of how, not so long ago, Parliament could function more or less civilly while dealing with important and divisive issues, and could actually get the business of Canada done .... [it] worked because MPs made it function. They seemed to understand that they were there to get things done.

That is not the case today and, on reflection, I'd have to say that the fraying of the system began during the Chrétien years. The fraying was not — it might surprise some I'm sure — the fault of the Bloc Québécois who, while preaching their own view of both history and the future, always treated Parliament with respect.

Rather it came from the Reform party led by Preston Manning. Reformers came to Ottawa with the argument that everything in the Nation's Capital was corrupt. In fact, Reform MPs were ordered at one point not to stay in Ottawa over the weekends in case they became corrupted by this latter day Babylon. (2)

So pundits and indeed everyone, must start to view Stephen Harper and his party from the historical perspective of Social Credit mentality. In fact, Harper and Aberhart have so many common characteristics, that you'd almost think he was a direct reincarnation.

They share an authoritative style, and both set out to control the media. Aberhart copied his messaging from Adolph Hitler, while Harper's muzzling and message control is pure Aberhart.

After assuming the role of Alberta premier in 1935, Aberhart refused to answer questions in the legislature. Instead he would listen to the debate and provide answers on his weekly evangelical radio program. This went on for four years, until he was finally forced to participate.

When does Stephen Harper ever answer a direct question, with anything other than talking points or snide remarks? Peruse Hansard and see how much time is wasted making sure that nothing gets done.

His party has also become an extension of the American religious right, who want to reshape Canada into a Judeo-Christian, Anglo hierarchy; where women, gays and minorities are second class citizens.

And like the old Social Credit movement, Harper's party was founded on extremism, self righteous indignation and the belief in an end of day prophesy, that they are responsible to ensure goes according to plan.

So to really understand how this government thinks and acts, we have to study it's actual history, and not the mistaken, and exploitative 150 year old Tory tradition.

That's what I hope to accomplish here, and maybe we can get people to start recognizing the difference, and viewing the new Conservative party of Canada from the right perspective.

*Stephen Harper, William Aberhart and Waiting for the Rapture
Posted by Emily Dee at 12:12 PM