Chapter Twenty-Seven: One Awful Thing After Another 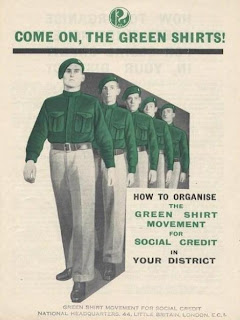 In London, on hearing of the victory, John Hargrave's Green Shirts assembled in Threadneedle Street. To symbolize the coming collapse of the existing monetary system throughout the world, they marched seven times around the Bank of England, while chanting praises of Aberhart's name. (1)

The victory of course, was the election of the Alberta Social Credit Party, in August of 1935; which would later emerge as the Reform Party, the Alliance Party and finally The Conservative Party of Canada, with Stephen Harper as it's leader.

The Green Shirts were part of a broader Social Credit movement, that included the Black Shirts under Oswald Mosley (2) and were contemporary to Adolph Hitler's Brown Shirts and Oliver Stillingfleet Locker-Lampson's Blue Shirts, whose motto was Fear God! Fear Naught! (3)

But John Hargrave would become more involved, when in the December of 1936, he visited Alberta when Clifford Douglas had turned his back on the Alberta premier. Hargrave had created a Social Credit Party in Britain though they had been unable to secure seats.

He agreed to act as as an advisor to the government, but it soon became clear that Aberhart just didn't grasp the concept. But something more important took place. Seventeen of Aberhart's MLAs requested a private meeting with Hargrave to explain the steps that he had drawn up. The media got wind of it and it created quite a stir. 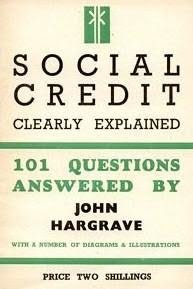 Aberhart finally agreed to allow John Hargrave to address the caucus but it was clear that there was a division in the Party, resulting in a 'Backbenchers Revolt'. (4)

The insurgents would reach 30 and it appeared as if Aberhart might be defeated by his own government. It wasn't until a social credit policy was promised that he was able to keep his job.

However, the feud continued and the press ate it up. They had already begun comparing him to Mussolini and Hitler, but now lampooned him mercilessly. One in particular, the Rebel was especially blunt.

Aberhart has been treated as though he were an honest, honourable man trying to introduce Social Credit; whereas the truth is that Aberhart is a dishonest, dishonourable, lying, blaspheming charlatan, who insinuated himself into power by deception and misrepresentation, and is morally unfit to hold the office of premier... You gained power by using the highest and noblest thing in life – religion – to appeal to the lowest – to greed, selfishness, cupidity. By using this fiendish combination, you set loose an uncontrollable flood of passion. You set neighbour against neighbour, friend against friend, brother against brother, man against wife. And then you crucified a suffering people upon the cross of your vanity and ambition. (6)

Eventually the excitement died down as Douglas sent two men, L. Dennis Byrne and George Powell, to the aid of the beleaguered Aberhart. MLAs were made to sign pledges, which they were more than happy to do since it appeared that they had won the battle. But the war wasn't over yet.