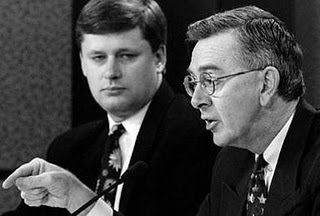 We need an unconstrained, unrestricted, full-fledged, unspoiled market economy, and we need it now ... We want to achieve the transition from a state-dominated economy to an economy based on the private sector, private initiative and private entrepreneurship . .. We are increasingly convinced that our country, or any other, is less unique than is often claimed ... The basic economic laws are valid across continents, economic systems, as well as ideological beliefs . . . The 'third way' [between central planning and the market economy] is the fastest way to the Third World. Vaclav Klaus, Czechoslovakian Minister of Finance, 1991

Most of his ideas were borrowed from Margaret Thatcher and Ronald Reagan, but since neither of the those people were touring at the time, Douglas was the best that the Reform Party could muster. They didn't really need to be sold on these principles, but Douglas had wrapped everything up in a neat little bow, with a simple message: "Don't blink!"

Preston Manning outlines the ten basic components of what was then dubbed 'Rogernomics', after Roger Douglas spoke at the Reform Party's 1991 Assembly.

'The Politics of Structural Reform'
"Roger Douglas who led a major effort by Labour government to reduce public spending, personifies the fact that changing times and conditions the world over are breaking down the old categories of left and right in politics. His short list of ten guidelines for implementing structural reforms, particularly in the area of financial and economic policy, could help with the transition from Old Canada to New Canada.

4. Once your momentum starts, never let it stop. Set your own goals and deadlines.
5. Credibility is crucial. It is hard to win and you can lose it overnight.
6. Make your goals clear. Adjustment is impossible if people don't know where you are going.
7. Stop selling the public short. Voters need and want politicians with a vision and guts to create a better future.
8. Don't blink or wobble. Get the decisions right the first time.
9. Opportunity, incentive, and choice mobilize the energy of the people to achieve successful change.
10. When in doubt, ask yourself, 'Why am I a Politician?' (1)

Manning was definitely star struck. Murray Dobbin was there and discusses the event, and the truth about the New Zealanders policies:

"Douglas was introduced by Preston Manning, the only assembly speaker to be so honoured. And Manning told the delegates: There are three basic reasons why we have invited Sir Roger Douglas to be with us ... and three reasons why Reformers should pay close attention to what he has to say ... Sir Roger is an authority in fiscal reform and has advocated and promoted many of the fiscal reforms necessary to deal with the fiscal crisis that is facing our country ..

"Secondly ... he has been in a position to actively implement those reforms. He is not only a reformer in word, he is a reformer in deed. Sir Roger deregulated the financial sector, phased down agricultural and other subsidies .. phased out import controls and drastically reduced tariffs levels. He instituted a 10% flat rate consumption tax (GST), with virtually no exemptions. Thirdly, Sir Roger accomplished all these things as a minister of a labour party in government.

"What Preston Manning and Roger Douglas did not tell their audience was the story of the impact of Douglas's policies on the people of New Zealand. Saskatchewan political economist, Dr. John Warnock, travelled to New Zealand to study the effects of what New Zealanders dubbed 'Rogernomics.' The figures tell a story of devastation - a word used by New Zealand's own agricultural minister to describe the state of agriculture in four years after the 'reforms': A 40 per cent drop in farm income; a 50 per cent drop in the value of farm land; a policy of paying 3,000 farmers incentives of $ 45,000 to leave and the suggestion that another 15,000 (out of 79,000) should follow them. Unemployment, which had been at 4 per cent before Douglas's reforms, jumped to over 12 per cent in just over a year and is still increasing.

"Douglas completely eliminated regional development grants and subsidies to rural services. Says Warnock, 'They had things like subsidized petroleum - regardless of where you were the price was the same - subsidized train service, bus service, airport service. They privatized all these things and the prices immediately skyrocketed.' A massive de-population of the countryside resulted, and approximately 40,000 New Zealanders per year have since left the country for Australia to find work since 'restructuring' took effect.(2)

This was not some brilliant strategy or economic theory. It was just mean and self serving. It's like going home to your children and saying from now on we are not going to feed you, or care for you when you're sick, clothe you or educate you. You must now fend for yourselves, because your dad and I want to buy a new boat. Oh, and we're keeping your paper route money.

The quote at the top of the page can be found in the introduction to Roger Douglas's book: Unfinished Business, and came from Vaclav Klaus, the President of Czechoslovakia, when he was finance minister.

He was nicknamed the Margaret Thatcher of Czechoslovakia and his economic policies were referred to as "gangster capitalism". He is autocratic and mean.

Extremely right-wing, he has refused to pass laws to protect homosexuals, and like Stephen Harper, and in fact Roger Douglas; believes that global warming is a myth.

And he has also created a situation where Roma residents of his country have been forced to flee, after facing unchecked discrimination, and having to live under the constant threat of violence.

Jason Kenney has closed the doors to the Roma people, calling their claims bogus, and refuses to allow them in without a visa. Unfortunately, since many live as gypsies, they have no way of obtaining one.

PARDUBICE, Czech Republic - A ghastly arson attack that has left a two-year-old girl fighting for her life contradicts Canadian and Czech government assertions that an exodus of Roma refugee claimants to Canada is driven by economics, rather than fear of persecution, say members of the Roma community here. The Roma, once known as Gypsies, describe living conditions that might fit the image of the Southern U.S. during racial segregation.

They say they face a constant threat of neo-Nazi attacks and hateful demonstrations, where marchers head into Roma communities and call them "parasites," organized by increasingly sophisticated organizations such as the far-right Workers' Party.

But it's all for a good cause, right? Free markets and making a handful of people filthy rich. Welcome to Preston Manning's 'New Canada', where we no longer give a damn.