Stephen Harper, William Aberhart and Waiting for the Rapture 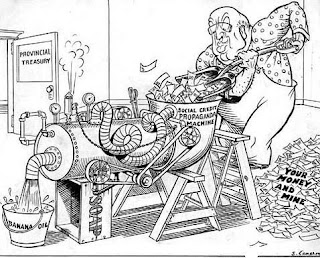 I'm going to go into the Christian fundamentalism shared by both Stephen Harper and William Aberhart in more detail, but I just wanted to bring it all into a modern context.

Harper himself reveals this in his now infamous 1997 speech to the Council for National Policy, but most people already knew that Social Credit was the predecessor of the Reform Party. The Reform then went on to become the Alliance Party of Canada and then the Conservative Party of Canada. Harper won the leadership when they were still calling themselves Alliance.

The 1935 articles show how William Aberhart established a propaganda machine fashioned after Adolph Hitler's Ministry of Propaganda & Public Enlightenment, which explains why people now compare Harper's control of the media to Nazi Germany.

However, he did not learn his technique from Hitler, but Aberhart.

Apparently Harper had studied the secret of the party's early success in Alberta, so he could tap into it as he launched his own political career. However aside from things I revealed in the first part of this story, I came across another element that is also quite disturbing.

In addition to being Alberta's unpredictable head man, Premier Aberhart is head of Calgary's Prophetic Bible Institute. Last fortnight he protested against being called a religious fanatic on the basis of an utterance made in 1917, when reporters understood him to say the Last Trump was at hand. "Let me say that Jesus is not coming in 1936 or 1937 or 1938 or 1939 or 1940 or 1941,:'' Premier Aberhart firmly told newshawks. "Have you got that clear? . . . Now listen carefully. Seven years before the coming of Christ, the raptures shall take place. This will be when the Lord appears in the clouds. The raptures have not taken place yet." (1)

'Raptures'? Where have we heard that before?

He [Aberhart] became fascinated with prophetical teaching in the Bible and studied a correspondence course by the American evangelical theologian Cyrus Scofield.

Waiting for the Rapture in the 21st Century:

Cyrus Scofield, as I mentioned in relation to Aberhart, is the father of the dispensationalist premillennialism movement, and his book; the Scofield Reference Bible, is believed to be the driving force behind Zionist John Hagee and Left Behind's Tim LaHaye.

Hagee blames those cult-y Catholic Christians for the world’s historic hatred toward Jews. The Catholic Church (“the Great Whore”) and Hitler were in conspiratorial cahoots with the Devil. But wait! The Jews may be God’s chosen, but that doesn’t mean they aren’t on this lunatic’s list of derision. After all, they brought the holocaust on themselves, in an ancient curse by God for perpetual idol worshipping. Despite the tragic torture and death of millions, Hitler was heroic, fulfilling Zion by driving the Jews back to Israel where they belong!

Hagee’s eager for nuclear war to erupt out of Israel, because that is a pre-requisite for Christ’s return.

I've mentioned John Hagee in several posts but of importance is that he is the founder of Christians United for Israel. Charles McVety is head of the Canadian chapter and Jason Kenney is joined at the hip with Charles McVety. I have also mentioned several times that I believe they are planning to use Israel's nuclear weapons to initiate what they call 'God's Foreign Policy', and it would appear so does Luzajic.

Oh and Tim LaHaye? Remember that 1997 speech of Harper's at the Council for National Policy? Yep, Tim LaHaye (along with James Dobson and others) founded that pro-military God's foreign policy group. They approved of Stephen Harper even before George Bush, and unless you're approved by them, forget about it.

Waiting for the Rapture With Stephen Harper:

Now I don't know how much Stephen Harper himself really believes of this stuff. Some in the media suggest that he only goes along with it to keep the So-cons in line, but I think it's much more than that.

Harper is a psychopathic narcissist, who will do whatever it takes to stay in power. He's been called a control freak, an extremist and a lying sack of ... oops ... erase that last one. It's mine.

According to Marcie McDonald, author of the book The Armageddon Factor, when he was speaking at the Civitas Society:

... he outlined plans for a broad new party coalition that would ensure a lasting hold on power. The only route, he argued, was to focus not on the tired wish list of economic conservatives or “neo-cons,” as they’d become known, but on what he called “theo-cons”—those social conservatives who care passionately about hot-button issues that turn on family, crime, and defence ...Arguing that the party had to come up with tough, principled stands on everything from parents’ right to spank their children to putting “hard power” behind the country’s foreign-policy commitments ..." (2)

And just look at the executive of this 'Society':

Other Past Presidents: Tom Flanagan, William Robson, and Lorne Gunter

So just how far is Stephen Harper willing to go with this 'hard power'? Does he believe in this stuff or has he just learned that it was part of the secret of Aberhart's success: the Fear Factor?

But as Marcie McDonald asks:

What does it mean if and when a believer in the infallibility of Biblical prophecy comes to power and backs a damn-the-torpedoes course in the Middle East? Does it end up fuelling overenthusiastic end-timers who feel they have nothing to lose in some future conflagration, helping speed the world on Hagee’s fast track to Armageddon? (2)

It would be nice to get an answer from our fearless leader, but he's not talking. Thank you William Aberhart and Adolph Hitler. He's learned his lessons well.