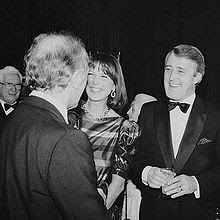 Brian Mulroney would come to power in Canada, the same year that David Lange became prime minister of New Zealand.

Lange's appointment of Roger Douglas as Minister of Finance, would have an impact on Canadian politics for years, and he would play heavily into the policies of our neoconservative government under Stephen Harper.

Brain Mulroney came from corporate Canada, so naturally the business elite looked to him to make the same "tough choices" as Ronald Reagan and Margaret Thatcher; who were already well known gurus of the neoconservative movement.

Here, surely, is the most authentic Canadian equivalent to the New Zealand experiment. It was elected to office only two months after David Lange's Labour victory of 1984, winning the largest parliamentary majority in Canadian history. Mulroney himself was the first Prime Minister since the depression to emerge from the corporate class, and his government's first Economic and Fiscal Statement outlined a comprehensive neo-liberal [Libertarian] agenda. (1)

But Mulroney got off to a slow start, in the eyes of the corporate elite and "free marketeers", though the left didn't agree, dubbing him "Reagan on the Rideau".

He would, however, put an end to the National Energy Program, a demand of Western Canada, and a campaign promise. But they would soon wish he hadn't, though you'd be hard pressed to find any Westerner today agreeing with you.

"Oscar Wilde wrote that there are only two tragedies: one is not getting what one wants; the other is getting it. In the fall of 1985, the latter tragedy befell Alberta's oil industry. The OPEC cartel failed to agree upon a world oil price. The result was a global free-for-all among producing nations. Canada's oil and gas producers were caught in the middle. Having recently gained freedom from the NEP, Canada's oil and gas industry was not protected as the price of oil dropped from US $27 per barrel ... to $8 per barrel by August 1986. ... Forty-five thousand oil workers lost their jobs." (2)

Mulroney would try to push through a free trade agreement with the United States, but then Liberal leader John Turner was adamantly opposed. The New York Times reported:

CANADA'S opposition Liberal Party announced last month that its majority in the upper house [senate] of Parliament would block the legislation necessary to implement a free-trade agreement that Prime Minister Brian Mulroney, a Progressive Conservative, had negotiated with the United States.

In a counter move to try to salvage his treaty, Mr. Mulroney is considered virtually certain to call an early election, possibly for October, and the treaty is likely to be the dominant issue in the campaign.

The trade bill would eliminate all tariffs over a 10-year period and lower barriers to investment and other curbs on trade in agriculture, energy and services. Legislation is moving through the United States Congress, which is expected to pass it before it adjourns for the November elections. (3)

He did in fact call an election, where he would run on the issue of free trade. Spearheaded by the National Citizens Coalition; a group of corporations, spent an estimated $19-million during his campaign, in support of the free trade deal. John Turner didn't have a chance. (4)

The first legislative action of the new government was to abolish the foreign investment screening agency. This was followed by a series of privatizations and de-regulatory initiatives culminating in the two free trade agreements (FTA 1988 and NAFTA 1992). Much more than tariff reduction deals, the latter constituted a virtual economic constitution for the country, limiting or prohibiting sovereignty in areas as diverse as energy pricing, government procurement, delivery of regional and industrial incentive grants, dumping and countervail actions, national treatment for cross border investment, and free trade in service industries. (1)

The free trade deal, that Turner referred to as the "sale of Canada" was devastating for the country. Thousands of manufacturing jobs were lost and more than 11,000 companies became not only foreign owned, but foreign controlled.

But Stephen Harper's newest Buy America/Sell Canada is even more intrusive. Our water has now been privatized and he has sent out tenders to the European Union to privatize our public services at the municipal, provincial and federal levels.