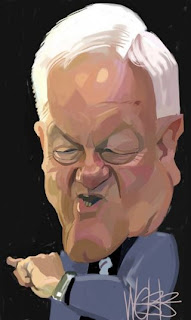 Roger Douglas has been a regular speaker at the Fraser, beginning with his first appearance in 1989.

Fresh off his dismantling of the New Zealand government, he was ready to instruct others on the art of radical reform.

However, in the case of New Zealand in 1984, when Douglas took his post as finance minister; a bit of radical reform was necessary.

They were virtually bankrupt, after several years of Keynesian policies and over zealous regulation.

The country was within days of defaulting on international loans; New Zealand's overseas diplomats were asked how much foreign cash they could raise on their credit cards. An urgent devaluation was needed to stem the outflows. (1)

But Douglas was like Margaret Thatcher on crack, and many of his actions had horrible results. He was the Yang without the Yin, and that lack of balance would cause the whole thing to come crashing down.

Though the popular theory is that former New Zealand finance minister Roger Douglas (1984-1989), turned the fortunes of his country around, the fact is, that while there was a temporary change in their economic position, much of it was an illusion.

He did bring in much needed cash, but his actions were too simplistic, with little or no forethought.

He also privatized 60% of state-owned companies, fired 55% of the government workforce and placed the central bank chairman on a performance contract. But it was too much too soon, and it would end badly.

His far-right policies were already alienating some supporters, but the prime minister continued to give Douglas free reign.

" ...he continued to support the Douglas experiment until the fearful stock-market crash that October [1987]. The New Zealand market dropped the furthest in the world; its recovery took the longest.

The shock caused Lange to argue that it was "time for a cup of tea" and to rein Douglas in — but not before tens of thousands of people lost their jobs. Eventually, Douglas, fuming, walked out of Cabinet. Lange, worn out, depressed and drinking heavily, resigned in 1989. It was a sad end to Labour's great economic experiment.

According to conventional economic wisdom, New Zealand had headed down the path of righteousness. But while the old, closed economy held no hope for the future, the gains had been oversold; economic growth remained, for the most part, slower than that of the rest of the developed world; productivity and living standards barely moved for years. (1)

However, Canada's neoconservatives have lauded Roger Douglas as the guru of finance. Why?

I think the answer is pretty simple. Their goals are not to direct Canada toward a bright economic future, but simply to "starve the beast". Douglas did that in spades.

So the Fraser invite him to speak on a regular basis, not for his smarts but his moxie; and his simple message: "don't blink".