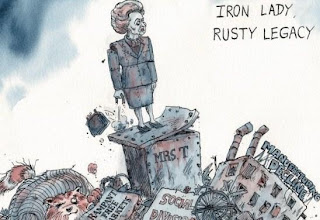 The Fraser Institute was founded in 1974 in British Columbia, to provide alternative policy to what some feared was an attempt to turn Canada into a socialist country.

In it's early days it supported the British Columbia Social Credit Party of William Bennet, and it's founder Michael Walker, even spoke to the Premier's cabinet.

Hayek, who became a Fraser Institute adviser, originated the idea of setting up fake scholarly organizations to supply authoritative studies demonstrating the superiority of markets over governments in solving all our problems. Why fake? Because a genuine academic organization would not start with a conclusion and then look for arguments and evidence to support it. (1)

When Walker was first establishing the Fraser, he also got direction from the British; Institute for Economic Affairs, where Margaret Thatcher would later snatch two of her advisers; Alan Waters and Ralph Harris. (2)

The IEA was founded by Antony Fisher, a man who made a fortune after introducing factory chicken farming to Britain. He had read a summary Hayek's The Road to Serfdom and became hooked on free market economy.

Thatcher was also greatly inspired by Hayek, and governed primarily from his theories. The think tank that Hayek suggested Fisher create, became a great propaganda vehicle for her policies.

The concept of these think tanks is brilliant. They register as a charity, entitling them to endowments, and tax free fundraising; yet they serve as a propaganda arm for party politics.

And an article in The Province magazine, seems to support past ties to Social Credit:

The organizations which support the Fraser Institute ... appear to be dominating B.C. politics through their use of the institute as a propaganda and government lobby instrument, says a report released by the Solidarity Coalition.... "Virtually the entire range of big forestry based capital in B.C. has membership linkages of a direct or indirect type with the Fraser Institute.... For the large corporations, sponsorship of the Fraser Institute produces a variety of benefits, both immediate and longer-term. In many instances, there is a direct connection between the policies of the institute and the interests of corporations."

The report concludes that the provincial government "has leaned heavily on the Fraser Institute to provide an ideological rationalization" for its recent program-chopping legislation. (4)

When the Reform Party was being created, Stephen Harper paid a visit to the Fraser, and his relationship with them has been mutually beneficial.

Just a year after the Fraser's anniversary, Harper was prime minister and it was payback time. Buried in his first budget was a provision to exempt from capital gains tax donations of stock to charity. Adding this new exemption to the existing tax credit for donations to charities means that the donor pays only 40 percent of the dollars he donates. Taxpayers pick up the rest.

The Fraser Institute is a registered charity. Of course, not only the Fraser will benefit from this new exemption. There are many thousands of registered charities in Canada, but only a few are likely to see their funding increase. Expect large endowments to come the Fraser's way. The institute's annual budget is $6 million and climbing. Hundreds of newly minted Calgary paper multimillionaires own shares in oil companies that have skyrocketed in value over the past few years.

Their shares will continue to rise as long as the government doesn't apply the provisions of the Kyoto Accord. Now they can help the conservative cause at little cost to themselves. Critics of the Fraser Institute will have to grit their teeth, pay their taxes, and bemoan the fact that they are supporting its work. (1)