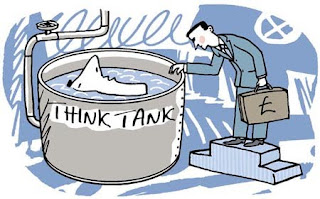 Think tanks are not a new concept, and have been around for some time. Often associated with institutes of higher learning, they were a vital tool for any government.

Initially, however, their political purpose was to aid legislators with policy proposals, by providing data relevant to their decision-making, prior to putting it into action.

For instance, if they were drafting policy dealing with unemployment, they might commission reports on labour demands, and the potential for providing training programs to meet those demands. That kind of thing.

However, most of the think tanks now, that provide the infrastructure for the neoconservative/reform agenda, work in the reverse.

They are not expected to give advice on policy. Instead, the politicians present their policy, and ask the 'think tank' to sell it, with reports that get fed to the media, or in pamphlets published by the institute. Therefore, any facts and figures must match the finished product, not help to create it.

The number of these so-called think tanks that help to sell the neoconservative agenda, have grown dramatically during the last two decades. And yet many of them are funded by the same industries and foundations.

And their reports are very similar, giving the appearance of a broader consensus, when in fact; they were all just presented with the same foregone conclusion.

One group that has provided a great deal of support to the reform movement, is the Donner Foundation. Right-wing journalist and author, Adam Daifallah spoke of Donner as:

... the lifeblood of conservative research in this country. A decade ago, with a mission to “encourage individual responsibility and private initiative to help Canadians solve their social and economic problems,” and an annual giving budget of over $5 million, the Donner made a huge difference. From 1993 to 1999, under the leadership of executive directors Patrick Luciani and Devon Cross, it provided seed money to start a host of topnotch free-market think-tanks across Canada: the Atlantic Institute for Market Studies, the Montreal Economic Institute, the Frontier Institute, the Society for Advancing Educational Research (dedicated to promoting charter schools), the conservative The Next City magazine (now defunct), and Energy Probe (a free market–oriented environmental organization). (1)

Perhaps the most influential for the Harper government though has been the Fraser Institute. Before helping to create the Reform Party, Stephen Harper spent a great deal of time at the Institute, and the relationship has grown considerably since then.