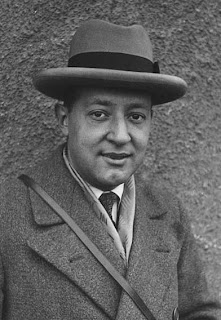 Konrad Heiden was a popular journalist who covered the rise of the Nationalsozialism (National Socialism) movement in Germany.

This populist crusade was spreading like a prairie fire in the 1930s, but after hearing it's leader speak in the beer halls of Munich, Heiden became alarmed at the message.

And when the followers of this charismatic and powerful speaker began to march in the streets, Heiden led university students in protest against them.

It was he who gave this future ruling party a nickname that would stick with it even today. He called them 'Nazi', a Bavarian slang term for "country bumpkin." (1)

Often writing under the pen name "Klaus Bredow", Heiden tracked Adolph Hitler for 23 years, and even after he was forced to flee to the United States, he would continue to sound the alarm, and actually predicited the 'Final Solution'.

"To drive 600,000 people by robbery into hunger, by hunger into desperation, by desperation into wild outbreaks, and by such outbreaks into the waiting knife -- such is the cooly calculated plan. Mass murder is the goal, a massacre such as history has not seen -- certainly not since Tamerlane and Mithridates. We can only venture guesses as to the technical forms these mass executions are to take. In his book Mein Kampf, Adolf Hitler suggested that the people to be killed be kept "under poisonous gas"; however, he speaks of a mere twelve to fifteen thousand. Doubtless the destructive instinct in the ruling class of the regieme has grown in the meantime..."

Social Credit and the Nazis

There are many books written on Social Credit, including several linking the movement to the Reform Party under Preston Manning and Stephen Harper.

However, I don't know if the history of the Social Credit crusade has been examined in it's latest form: The Conservative Party of Canada, which arose from the populist movement of William Aberhart.

And the populist movement of William Aberhart emerged simultaneously with the populist crusade of Adolph Hitler and his Nationalsozialism. Both were based on antisemitism and the notion of a Jewish conspiracy theory.

But as I've said before; at the time Adolph Hitler was much admired by the western world, and was in fact the Time magazine "man of the year" for 1938. So while Harper's authoritarian and secretive style is pure Aberhart, it is steeped in early Nazi ideology (not the Holocaust, which is a separate issue)

Harper was Never a Tory but a Socred

Former conservative prime minister John Diefenbaker, once toyed with the idea of bringing the Socreds into his party, which prompted a member of his caucus, Jim MacDonnell, whose father was a friend of Sir John A.'s; to exclaim that he "would now turn over in his grave!" (3)

When Dalton Camp learned of earlier attempts at a merger of the Progressive Conservative party with the Alliance, under Stockwell Day, he said of Day that he "is viewed by most Tories as embedded in the lunatic fringe."

And when Peter MacKay sold out the Progressive Conservatives by disbanding the party and joining his handful of MPs with the Reform-Alliance, longtime MP, Flora MacDonald stated that it was:

... the demolition of a historic 150-year-old institution that has done so much to build this country ... The party's future lies not in some right-wing alliance that would violate the progressive and moderate traditions of its former leaders, but with a renewed emphasis on the values that the great majority of Canadians feel represent their views." (4)

So Plomondon's attempt to rewrite history falls short, simply because he should have subtitled his book: The Truth About Conservatives from MacDonald to MacKay: The End!

This blog is actually my research for a book I'm currently writing under the working title: Aberhart and Harper on Crusade, but that won't be the title I publish it under, if I eventually do. I intend to dedicate it to Flora MacDonald ... oh, and my family ... who have had to endure years of my yammering about politics.

I have copyrighted this body of work, which doesn't mean you can't use it for personal research, provided the credit is given to 'Emily Dee' with links to this blog. You can click on all images to find their source, many of which are also copyrighted. I won't be publishing them with my work, unless I first obtain permission. I can't draw worth a lick, so won't attempt my own illustrations, though I do enjoy a bit of photo-shopping.