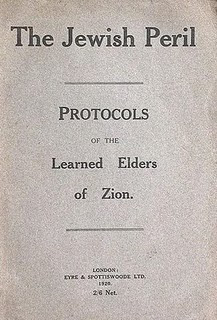 Born out of the deplorable economic and social conditions of the Depression, Social Credit became as much a religious crusade as a push for economic reform.

But it also had a dark side.

Originating in England; the brainchild of arch-antisemitic Major C. H. Douglas, the necessity for change was inspired by a book that was being distributed at the time, Protocols of the Learned Elders of Zion.

According to Janine Stingel "Social Credit was wholly dependent on an anti-Semitic conspiracy theory." (1)

For populist parties to succeed they must find a common enemy and a common cause; and in the 1930's that common enemy became the banks, and the cause an alternative financial system.

Eventually those horrible banks were believed to be part of a larger conspiracy of the Jewish people to take over the world.

Anti-Semitism in Canada in the 1930s and 1940s involved an image of Jews as international conspirators, secretly plotting world domination through an inchoate combination of international banking, communism and Zionism. In the mythology, based on the forged but widely circulated Protocols of the Elders of Zion, Jews thus posed a threat to national sovereignty, property, peace and prosperity.

Anti-Semitism was not a coincidental adjunct to this right-wing populist movement, but resided at the core of a paranoid vision of bankers and money-lenders swindling honest Canadians out of the wages of their toil. Depression-era Alberta was fertile ground for such a message, particularly when it came through the medium of a popular radio-preacher turned politician, "Bible Bill" Aberhart.

"Alberta thus became home to the only North American jurisdiction with a government that officially endorsed anti-Semitism." (2)

It is widely believed that while Aberhart adopted, or at least attempted to adopt, the economic theories of Major Douglas, he did not buy into the rampant anti-semitism. Like Stephen Harper, he was able to play the role of the moderate. However, evidence suggests otherwise.

Aberhart's positive statements about Jews were balanced by equally negative statements. During a lecture at the Calgary Prophetic Bible Conference in 1922, Aberhart explicitly opposed Zionism and argued that because Jews had not accepted Christ they would never succeed in regaining the Promised Land of
Zion: "

The JEWISH RACE must yet acknowledge that the CHRIST who was crucified to the CROSS of Calvary was the SON of GOD, their MESSIAH. Until they will acknowledge that they must expect the curses of the world and can not expect the Blessings of GOD." In other sermons Aberhart criticized the Jewish nation for its sinfulness, including the sins of selfishness, hypocrisy, usery, violence, injustice, and discontent with wages.He viewed Christianity as a war against the Antichrist and suggested that when Armageddon came, most Jews would be duped by the Antichrist, believing him to be the Messiah. (3)

And though proven to be a forgery, the Protocols were often referenced around the world.

Despite conclusive proof that the Protocols were a gross forgery, they had sensational popularity and large sales in the 1920's and 1930's. They were translated into every language of Europe and sold widely in Arab lands, the United States, and England. But it was in Germany after World War I that they had their greatest success. There they were used to explain all of the disasters that had befallen the country: the defeat in the war, the hunger, the destructive inflation... (4)

Henry Ford printed them in his newspaper, the Social Credit parties of Quebec and Alberta published them in their literature and Social Credit MP for Wetaskiwin, Norman Jaques, tried reading the Protocols in the House of Commons.

But nobody adhered to the message of the Protocols like Adolph Hitler.

To what extent the whole existence of this people is based on a continuous lie is shown incomparably by the Protocols of the Wise Men of Zion, so infinitely hated by the Jews. They are based on a forgery, the Frankfurter Zeitung moans and screams once every week: the best proof that they are authentic. What many Jews may do unconsciously is here consciously exposed. And that is what matters. It is completely indifferent from what Jewish brain these disclosures originate; the important thing is that with positively terrifying certainty they reveal the nature and activity of the Jewish people and expose their inner contexts as well as their ultimate final aims. The best criticism applied to them, however, is reality. Anyone who examines the historical development of the last hundred years from the standpoint of this book will at once understand the screaming of the Jewish press. For once this book has become the common property of a people, the Jewish menace may be considered as broken ... (5)

When Preston Manning later tried to tap into the success of the Social Credit Party, that ran Alberta for almost four decades, he stated:

As I grew up, I learned that the "prairie populism" with which I was familiar—the Social Credit movement in Alberta—was not an isolated political aberration, but part of a much broader political tradition ... Years later, I developed a more objective view of populism, including a healthy fear of its darker side and a more realistic assessment of its potential as an agent for political change. (6)

He may have developed a 'healthy fear', but it did not stop him from bringing in the extremist elements when he launched his Reform Party. In fact at their first assembly, they adopted a motion to allow Right Wing fringe groups to join them, including Doug Christie's Western Canada Concept (Stockwell Day's father was a close friend of Christie's and a member of the WCP), a separatist party. (7)

When it was learned that several neo-Nazi groups had infiltrated the party, who coincidentally also followed the Protocols of Zion, Manning would simply say that "a bright light attracts bugs."

But as my own late father might say; "so does shite."