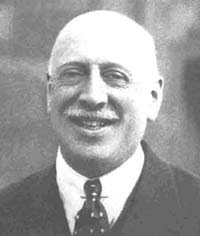 After Social Credit's victory, Douglas had cabled Aberhart: "Congratulations. There will be others, but only one first." He responded by asking when he could come. But since Douglas was still under retainer with the Alberta government and had already met the terms of his contract for that year, he told Aberhart that he would need his expenses if he was to make a special trip.

The new premier ignored his request. There was already trouble brewing between the two, mainly because Aberhart had not really grasped the principles of Social Credit, but also over the religious element that he had added on his own.

As a political theory, Social Credit was presented as a "Way of Life", that could be compatible with both Christianity and democracy. But in Alberta under Aberhart, "... the philosophy was presented within a context of Christian fundamentalism and Bible prophecy that remained quite foreign, and indeed incomprehensible, to the mind of Douglas." (1)

Last week Major Douglas had had enough of the farce which has been going on in the Canadian province of Alberta in the name of his Social Credit. Taking pen in hand, the Major resigned his $10,000 per annum job as Alberta's adviser, canceled his proposed voyage to oversee the setting up in Alberta of Social Credit. This tended to leave stranded the rotund, frog-eyed school principal and radiorating lay preacher William ("Bible Bill") Aberhart who won Alberta's last election and its Premiership by promising $25 per month in Social Credit to every bona fide citizen of the province. Premier Aberhart, whose detractors now derisively call him "Abie," spent the week getting off to Major Douglas pious cablegrams urging him to reconsider. (2)

Douglas would not be the first or last to become disillusioned with William Aberhart. The man who had toured him around the United States and who had introduced him to Father Coughlin, Herbert Brougham, also lost faith with the man.

Brougham, who has been called the first Douglasite of the United States, was a friend of President Woodrow Wilson, with connections that could have helped immensely. He was also part of a group behind a bill in support of Social Credit, and would have been invaluable:

Congressman T. Alan Goldsborough (D., Md.) in August 1935, sponsored the first bill embodying Social Credit principles to be introduced in any legislative body in the United States. This was largely in the form drafted by a committee of the New Economics Group of New York consisting of Allan R. Brown, Edward F. Harvey, W. A. Nyland, Carle C. Conway, Jr., and H. B. Brougham. Its short title was the "National Income and Credit Issue Bill" introduced on August 22 and, as Brougham wrote in New Democracy, embodying "the tenets of Douglas without any frills. The bill presents straight out Social Credit measures." It would establish the National Credit Account, defined in Title I as "the money valuation of the annual unused capacity of the industries and people of the United States to produce wanted goods and services." The Treasury would produce non-interest bearing credit certificates, not to exceed the National Credit Account, "to circulate as money throughout the banking system only." These certificates would finance a discount on prices to consumers at retail.

They would also provide a national per capita consumers dividend of $5.00 a month. This consumers' dividend and other features of the bill would be administered by an independent regulatory agency called the Federal Credit Commission. Should the Commission records show an unduly expanded monetary condition then a Credit Retirement Fund would set aside a portion of national revenues to retire Treasury credit certificates. The bill was discussed and analyzed at length in New Democracy, advocated by the League for National Dividends and, with Goldsborough as the ranking member of the House Committee on Banking and Currency, there were brief hearings on H.R. 9216 in the 74th Congress. On this occasion, Paul Hampden testified for the Social Credit bill at the invitation of Goldsborough. The bill lapsed at the end of the 1936 session. (3)

While in the U.S. Aberhart gave Brougham the opinion that he wanted his help, but when he arrived in Edmonton, he was given the cold shoulder. Aberhart denied having made any promises but documentation proved otherwise.

Burning bridges had become part of a pattern.

Chapter Twenty-One: The Illuminati and Such