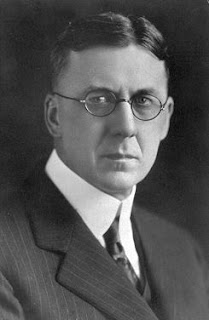 John Edward Brownlee was the Premier of Alberta from 1925 to 1934, when a scandal cut short his career.

He started out as a lawyer for the United Farmers of Alberta, and when they formed a political party, he joined the legislature, first as attorney-general, and then party leader.

William Aberhart, had been selling the concept of Social Credit for several years before deciding to create a poltical party himself. Originally he had only hoped to convince the government to adopt Socred principles, to help them through the Depression.

The UFA agreed on principle, even inviting the author of the new economic theory, Major C. H. Douglas and several others; to speak to the legislature. They eventually retained Douglas for a fee of 10,000 pounds a year, though eventually correctly concluded that the changes to finance and banking would go against the Canadian Constitution.

Riding in Cars With Boys

Brownlee was a rather serious chap, born and raised in Ontario. There is a story about how "the village children, displeased with his serious temperament", threw him into Lake Erie. He does have that face.

But Brownlee also may have had another side.

In 1934 he was accused of "enticement and seduction" by "beauteous, blonde Miss Vivian MacMillan who is exactly the type Hollywood likes to cast for stardom in courtroom dramas of clean women and dirty politics." (1)

This 'beauteous blonde' told a story of how when she was just a young thing of 18, on a picnic in the small town of Edson, Alberta; the married Brownlee suggested she come to the big city where he would set her up with a job.

The seduction, according to Vivian MacMillan, consisted in Premier Brownlee's telling her that illness had caused Mrs. Brownlee, who had borne him two strapping sons, to become his wife in name only and that this drove him nearly frantic. "He told me he needed me as a pal," testified Miss MacMillan. "I told him that if I did such a thing it would be a sin. He told me that he could not go on as Premier of Alberta unless I would give in to him. I seemed to be under a spell. He seemed to be playing with me like a cat plays with a mouse. I couldn't stop going out with him. His influence was too strong."

Six months of going out with the Premier of Alberta in his motor car on starry nights were described by Miss MacMillan without coming to the point until counsel for the Premier cut in : "He made a proposition to you to part with your honor?" "No, he didn't say 'part with my honor.' " mused Vivian MacMillan. "He said it would be doing the honorable thing." (1)

What was the poor girl to do?

But after driving around on starry nights, Brownlee's little escapades apparently led to other things.

She testified that he turned on water in the bathtub to cover the noise, tiptoed into her room and led her back to his, tiptoeing in step with him "so that the footsteps would sound like one person." He also gave her, she said, large black pills.

"Large black pills!" snorted counsel for the Premier. "A boon to the medical profession! This man was committing abortion on you — was that the idea?"

The premier's lawyer called it a conspiracy, but Brownlee was charged and forced to pay damages. Apparently the cost of 'tiptoeing in step' was about $ 10,000.00 to the girl and $5,000.00 to her poor father.

Naturally the United Farmers had to act swiftly:

Mopping their honest faces on a sizzling Alberta afternoon, district leaders of the United Farmers Party met last week to pass political judgment on Provincial Premier John Brownlee, found guilty fortnight ago of "enticing and seducing" an Alberta Government stenographer, blonde Miss Vivian MacMillan. Crestfallen Premier Brownlee had nothing to say, but the judge before whom he had been tried had plenty. (2)

Whether these were the actions of a naughty premier, or baseless accusations; it kept the tabloids busy and played into the hands of William Aberhart and Ernest Manning, as they were about to embark on a new journey.

Chapter Sixteen: The Makings of a Political Party