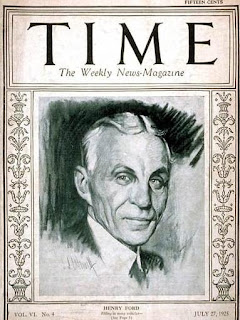 "The only statement I care to make about the Protocols is that they fit in with what is going on. They are sixteen years old and they have fitted the world situation up to this time. They fit it now." Henry Ford (1)

Another person that William Aberhart had looked forward to meeting on his tour was Henry Ford, but he was away.

Coughlin and Ford worked together on many projects, and became two of the most influential promoters of the Protocols of Zion, even though they were determined to be fake.

And sadly, they were also the force behind the evil unleashed by Adolph Hitler two decades after Ford began paraphrasing and publishing them under the title: The International Jew.

Aberhart would not only adopt the notion of a worldwide Jewish conspiracy, but he also emulated Adolph Hitlers' propaganda machine and then unprecedented control of the press. (3)

Henry Ford and the Jewish Conspiracy

In 1920, Henry Ford took over a small weekly newspaper, the Dearborn Independent, which had been acquired by his controversial private secretary, Ernest G. Liebold. Liebold, an arch anti-Semitic, remained on as editor and in a short time the paper went from a modest circulation to a readership of more than 700,000.

Part of this was due to generous commissions paid to sales people for subscriptions, but it was more because of the content. And though the paper was never a money maker, Ford was determined to keep it going:

Undoubtedly Mr. Ford's fondness for his paper is due to his ability to say in it just what he thinks about Jews, moneylenders, international bankers, currency, who started the War and why, and other favorite topics. As a subtitle, the weekly bears the slogan, "Chronicler of the Neglected Truth." (4)

These were later bound into four volumes, and distributed worldwide.

Vincent Curcio wrote of these publications that "they were widely distributed and had great influence, particularly in Nazi Germany, where no less a personage than Adolf Hitler read and admired them." Hitler, fascinated with automobiles, hung Ford's picture on his wall; Ford is the only American mentioned in Mein Kampf. Steven Watts wrote that Hitler "revered" Ford, proclaiming that "I shall do my best to put his theories into practice in Germany, and modeling the Volkswagen, the people's car, on the model T." (5)

Eventually a lawsuit and boycott of Ford products, forced him to shut down The Independent. As part of the settlement, he also had to write a letter of apology and publicly denounce the Protocols as fake.

"I deem it to be my duty as an honorable man to make amends for the wrong done to the Jews as fellowmen and brothers, by asking their forgiveness for the harm I have unintentionally committed, by retracting so far as lies within my power the offensive charges laid at their door by these publications, and by giving them the unqualified assurance that henceforth they may look to me for friendship and good will." (6)

Although, according to Gerald K. Smith, Ford never signed the letter of apology.

It was on the occasion of one of these personal visits with Mr. Ford that he gave me a sensational and shocking report. He said: "Mr. Smith, my apology for publishing 'The International Jew' was given great publicity, but I did not sign that apology. It was signed by [Ford employee] Harry Bennett." (7)

How credible that is, considering Smith's own prejudices, remains disputed, but I don't believe Henry Ford's views changed much over the years.

And it was in that atmosphere that William Aberhart began to formulate his own political opinions.

During a lecture at the Calgary Prophetic Bible Conference, he told his audience that:

7. Protocols of the Elders of Zion, Introduction by Gerald L.K. Smith, 1934 Reprint