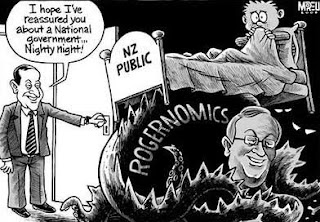 The Libertarian experience in Canada was not a new concept, when Roger Douglas began to influence leaders like Preston Manning, Ralph Klein and Mike Harris.

In 1977, when Sterling Lyon came to power in Manitoba, he adopted Margaret Thatcher's system of slashing social programs and pursuing a right-wing agenda, inspired by the business elite.

Manitoba wasn't ready for this and he only lasted one term.

It's interesting that a new study is taking place by Evelyn Forget, a researcher and professor and the University of Manitoba.

She is attempting to determine whether or not the guaranteed income program initiated by the NDP prior to Lyon coming to power, had a direct result on the health and well being of the province's residents.

From 1974 through 1978, about 30 per cent of the population of Dauphin was provided with a "mincome," as the guaranteed level of income came to be
called. "We found that, overall, hospitalizations in Dauphin declined relative to the control group," said Evelyn Forget, professor of community health science at the University of Manitoba. "We also looked at accidents and injuries, and they also declined. You can argue that accident and injury hospitalizations are strongly related to poverty."

The goal of the program, which cost $17 million, was to find out whether a guaranteed income would improve health and community life. If a household's income dropped below a certain amount, the program would top it up to an income equivalent to the welfare rates at the time.

The trouble with neoconservatism is that it doesn't take in the broader picture. Keeping people fed can reduce health care costs. But then they don't believe in public health care either, so I suppose this would have little effect on the decision making.

Another attempt at neoconservatism in Canada, took place in 1981 in British Columbia, when Social Credit Premier Bill Bennet, initiated the the "Restraint" program, which slashed social services and gutted labour laws.

In this, the government was backed by a cohesive resident business sector centred in resources and trade, and the most assertive Chicago-school think tank in the country [The Fraser Institute]. (1)

And a third pre-Douglas neoconservative experiment was at the hands of the 1982 Saskatchewan Conservatives under Grant Devine, who began an aggressive privatization scheme.

His government was eventually involved in one of the worst scandals in Canadian history, that saw 14 members of the legislature convicted of fraud and breach of trust for illegally diverting hundreds of thousands of dollars from government allowances in a phony expense-claim scam.

One of Stephen Harper's MPs, Tom Lukiwski was the general manager of the party and Peter MacKay remains a strong supporter of Devine.

But beginning in the mid-1980's Roger Douglas received a lot of press in Canada, and his handling of New Zealand's finances was being referred to as an economic miracle:

Repeated airings in the Canadian media have disseminated a diffuse and contradictory set of impressions of the recent New Zealand experience. Among them might number of the following. Sometime in the mid-1980's this small English speaking island state in the south Pacific apparently experienced an economic crisis. This led a left-wing government to implement a Reagan-style program of market reforms which, though controversial at the time, has transformed the New Zealand state and business sectors in positive directions.

Today this yields a budgetary surplus, a stable currency, favorable credit ratings, moderate inflation and a buoyant export sector. Since the first three of these remain unattainable today in Canada, it might reasonably be concluded that the New Zealand experience may have something valuable to offer Canada.

However this result has not been achieved without costs. The new regime has ignored and thereby deepened the predicament of the poor, the weak, and the unlucky. All of these groups are excluded from the economic miracle, and the long run costs this imposes on New Zealand society have yet to be acknowledged. (1)

Several Canadians tuned out after "... the New Zealand experience may have something valuable to offer Canada", including Preston Manning, Stephen Harper, Mike Harris and Ralph Klein.

1. "The New Zealand Experiment: A Canadian Perspective", By Peter Clancy, Electronic Journal of Radical Organizational Theory, June 1996.
Posted by Emily Dee at 3:14 AM