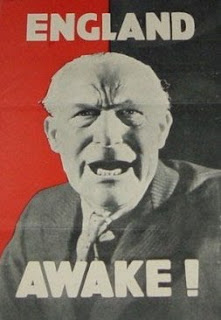 Another group that would become part of the new fascist/populist movement, were the Blue Shirts, founded by Oliver Locker-Lampson, in 1931, to fight what he feared was the spread of communism.

They were also referred to as the Sentinels of the Empire, and their membership is said to have been as high as 100,000.

Besides 'England Awake', they also used the slogan Fear God! Fear Not!

A big blue flag drooped from a staff at the Commander's right. Most of the audience wore at least a bit of blue. Women in azure dresses and hats wore brooches with the motto: Fear God! Fear Naught! Men wore blue enameled cufflinks with the same motto in their blue cuffs. Outside Albert Hall waited several swank blue motor cars with the radiator emblem Fear God! Fear Naught! The blue blood of the British ruling class was up—this was the charter mass-meeting of Commander Locker-Lampson's blue-shirted "Sentinels of Empire," founded "to peacefully fight Bolshevism and clear out the Reds!" (1)

And their battle hymn was written by Locker-Lampson himself:

The night of slothful ease is past,
The days of fear are gone at last,
And England's voice is raised in a song
That we shout aloud as we march along!

Chorus:
March on!
March strong!
Honor and Liberty call.
Sons of the free, our duty be
To fight for freedom for all!
Tyrants and foes beware!
Our swords are in the air.
So shoulders together!
Forward for ever!
To triumph we march four square.

Second verse:
Let others scream their Hymns of Hate,
And work to undermine the State.
Our heritage is builded high
On faith and love—they will not die!
Chorus:
March on!
March strong! etc.

Sir Oliver saw the fascist movement as the best way to fight against the "Red Menace", and initially supported both Mussolini and Hitler.

"Britians Blueshirts have sent to Premier Mussolini, as head of Italy's Blackshirts, a set of silver and blue enamelled cufflinks and a badge, the insignia of the party ... A phonograph record of the Blueshirts anthem "March On" (2)

Locker-Lampson also wrote a column in the Daily Mirror, where he discusses meeting Hitler several years before, while with a group of British officers who had been prisoners of war in southern Germany during the First World War. It so happened that Hitler, then a lance corporal in the German Army, was recovering from his wounds in a nearby hospital, and asked the Brits if they would show him how to play cricket.

He later decided the game was too soft, and said he would prefer it be played without shin pads, and with a harder ball. I guess that explains a lot. (3)

However, Lockyer-Lampson did not condone the anti-Semitism that was adopted by the other fascist parties, and would speak out against it on many occasions.

In 1933, he played host to Albert Einstein and was so concerned with the German scientist's safety, that he posted guards at his home. (4)

This of course would make him an enemy of the followers of Protocols of Zion, who became convinced that he was part of the global Jewish Conspiracy. The notorious anti-Semite, Arthur Leese, blamed him for his imprisonment.

ON 15th July, 1936, Mr. Oliver Locker-Lampson, M.P., a childhood friend of the Rothschild family, asked in the House of Commons whether the Attorney-General proposed to institute legal proceedings against the authors or publishers of The Fascist, the issue of that paper for July containing allegations against the Jews of the practice of ritual murder. The Attorney-General replied that the matter was under a consideration. (5)

The Blue Shirts would disband, but Oliver Locker-Lampson, would be a constant rival of Oswald Mosley, and his Fascist Black Shirts.

5. My Irrelevant Defence: Meditations Inside Gaol and Out, On Jewish Ritual Murder, by: Arnold S. Leese, 1938
Posted by Emily Dee at 11:33 AM