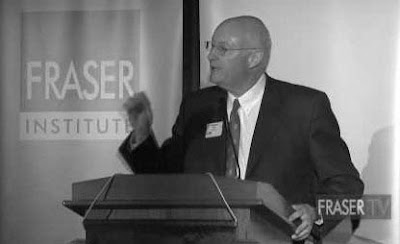 On August 23, 1971, Lewis F. Powell, then a corporate lawyer and member of the boards of 11 corporations, wrote a memo to his friend Eugene Sydnor, Jr., the Director of the U.S. Chamber of Commerce. (1) Outlining the need for a business-financed propaganda infrastructure, he stated:

"Success in defending capitalism lies in organization, in careful long-range planning and implementation, in consistency of action over an indefinite period of years, in the scale of financing available only through joint effort, and in the political power available only through united action and national organizations”. Over time, this machine would hobble activist governments, undo the social and economic advances of the 1950s and '60s, and put business back in the driver's seat, Powell predicted. (2)

The Chamber and corporate activists took his advice to heart and began building a powerful array of institutions designed to shift public attitudes and beliefs over the course of years and decades. The memo influenced or inspired the creation of the Heritage Foundation, the Manhattan Institute, the Cato Institute, Citizens for a Sound Economy, Accuracy in Academe, and other powerful organizations. Their long-term focus began paying off handsomely in the 1980s, in coordination with the Reagan Administration's "hands-off business" philosophy. (1)

The memo would also make news north of the border. The corporate sector in British Columbia became alarmed when an NDP government was elected in 1972, and sprang into action:

In the fall of 1973, Michael Walker was working for the federal finance department when he got a call from an old college friend, Csaba Hajdu. Hajdu's boss, MacMillan Bloedel's T. Patrick Boyle, and other business executives in B.C. were greatly agitated by the NDP government of Dave Barrett and wanted advice on how to bring about its demise. In the spring, Walker met with Boyle, who twenty-three years later is still a Fraser Institute trustee. While a think-tank was not an ideal way to deal with the immediate problem of getting rid of the NDP government, Boyle and his mining-executive friends were apparently willing to take the long view. Walker's pitch was good enough to persuade fifteen of them to hand over a total of $200,000 to get the project started." It was the seed money for the Fraser Institute. (3)

And according to Trevor Harrison:

Canada's neoconservative movement had it's first "think-tank", though certainly not it's last. And it wouldn't be long before they would start moving into government circles:

By 1975, B.C.'s right-wing had once more coalesced, this time under W.A.C. Bennett's forty-four-year-old son, Bill Bennett. Barrett's NDP was defeated by the Socreds. (5)

They stayed in power for several years with the help of the corporate funded Fraser Institute:

As Socred fortunes began to wane, Bennett's political advisers decided upon a marketing strategy that would present Bill Bennett as the 'tough guy' who would straighten out BC's economic problems. The result was his announcement in 1982 of a curb on public sector wages and a freeze on government spending. The economy, however, continued to crumble.

An election was set for 5 May 1983, during which Bennett promised that, if elected, he would continue the policies of moderate restraint practised in 1982. On election night, Bennett's Social Credit party took thirty-five seats (49.8 per cent of the vote) to the NDP'S twenty-two seats (44.9 per cent of the vote).

Before the opening of the new legislature, the Socred cabinet was advised by the Fraser Institute's Michael Walker of the policies it should take to turn the economy around. Guided by Walker's advice, the Socreds set about making British Columbia the 'testing ground for neoconservative ideology.'

On 7 July 1983, Bennett's government introduced both a budget and an astonishing twenty-six bills. Among other things, the bills removed government employees' rights to negotiate job security, promotion, job reclassification, transfer, hours of work and other working conditions; enabled public sector employers to fire employees without cause; extended public sector wage controls; repealed the Human Rights Code; abolished the Human Rights Branch and Commission, the Rentalsman's Office, and rent controls; enabled doctors to opt out of medicare; removed the right of school boards to levy certain taxes; and dissolved the Alcohol and Drug Abuse Commission."' (5)

They were on a roll, and would continue their mission, guiding both Ralph Klein and Mike Harris, through their steamrolling of social services, and promotion of the corporate sector. Stephen Harper would also seek out the Fraser when he was helping to create the Reform Party, and they continue to guide his policy.