Words of Wisdom That Should Not Have Been Ignored

In 1965 a young reporter with the Calgary Albertan wrote a piece on the history of the Social Credit party in that province, which was then celebrating it's 30th anniversary.

Created during the depression, when desperate people were looking for a saviour, it was both a blessing and a curse. And this is what he discovered in interviewing those who were around at the time of it's creation. Reports were either glowing or painted a picture of "hooligans, emotion run amok, and a stab of fear."

In the churches, the country churches where so long there had been unity, Social Creditors sat on one side of the aisle, and others on the other, and there was a hostile silence after the service. (1)

And this was actually encouraged by the party. Divisive politics played out well at the ballot box. And so did fear.

Meetings of the opposition were often disrupted by " a 'group of big fellows' who honked car horns, yelled and pounded logs against the walls and doors of their meeting halls. Reporters were barred from [Social Credit] meetings, and often made to feel unsafe upon the streets." (1)
And on his Bible program, then leader William Aberhart regaled against "Henchmen", "Bigshots" and "those who betrayed Christ". And if critics phoned into his radio show, they were "threatened with tar and feather, shooting and physical violence". Religious fervour and politics can create a dangerous climate.

So when this young reporter sat down in 1965 to file his story, he understood the dangers of this kind of political party. His name was Joe Clark and he would go on to become Canada's youngest prime minister. 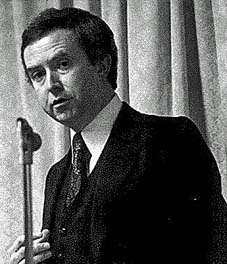 Yesterday, someone posted a CBC clip from the 2004 election campaign, on Canadians Rallying to Unseat Stephen Harper. In it Joe Clark suggested that former PCers (the party folded in 2003) should vote Liberal, and called Stephen Harper "a dangerous choice for voters".

Naturally the Reform/Alliance members, now marching under the 'Conservative' banner, went on the attack, suggesting that Clark was just upset because he was on his way out.

However, if the media had dug a little deeper, they would have understood that Clark was speaking from decades of research, and experience with this movement, that began in 1935 as Social Credit under first Aberhart, and then Ernest Manning. It then passed to Ernest's son Preston under Reform and Preston's lieutenant Stephen Harper under Alliance, before becoming the 'Conservative Party of Canada'.

He knew what they stood for. He knew how they operated. And he knew that Stephen Harper was a "dangerous" man.

Joe Clark and Preston Manning attended the University of Alberta at the same time and were members of the Youth Parliament. At the time Manning was considered to be a little odd.

At university in the early sixties he gave the impression of a rural kid completely isolated from the ways of urban society. He presented an odd image. "He was part of the Youth Parliament's Social Credit caucus at the same time Joe Clark, Grant Notley (the late, former leader of the New Democratic Party in Alberta), Jim Coutts (who became prominent in the Liberal Party under Pierre Trudeau), and others were representing their respective parties. He was a good speaker, but you never saw him on campus. People knew who he was, and the rumour was that his father didn't want him to hang around the university too much because it would be a bad moral influence on him," recalls Fred Walker, a student at that time. "He looked very out of place — odd enough in his mannerisms and physical appearance and dress to be the occasional subject of ridicule. He gave the impression of being a very serious and committed young man — but more an apologist for his father's party and policies. He didn't play a very prominent role." (2)

But during debate it was clear that his political thought was not only to the right, but also, like his father's, grounded in a fear of socialism.

"It was not simply that Social Credit was found ... to be wanting in areas of social policy - it was more that conservative ideas were being challenged by socialism. Left-wing thinking was influencing events and people ... 'We [socreds] believe that Canada is drifting towards socialism even when the majority of Canadians are opposed to collectivism and the welfare state...'" (3)

The idea that the majority of Canadians opposed the welfare state, came from party rhetoric, and was not based on fact, a pattern that continues today.

What Canadians wanted was more from their government. If they were expected to go to war in the name of nationalism, then they deserved to share in the resources of the nation that they had fought for.

After the war, public policy launched upon a prolonged process of social reform. It was as though the generation that had endured the Depression and fought the war had determined upon the establishment of a new Canadian society based upon compassion and caring and a gathered resolve that life could be made better for all Canadians by governments committed to principles of tolerance, fairness, and equity. (4)

After the Reform Party was founded, Preston Manning decided to run against his old university nemesis Joe Clark in the riding of Yellowhead Alberta, for the 1988 election. This wasn't so much because of a personal grudge, but he felt that the publicity would be good for the party. With Mr. Clark's status, the press would be following this race closely.

There is a funny story about that campaign from author Gordon Laird.

"Like many Albertans Preston Manning knows how to dress cowboy ... Manning learned how to ride on his parent's farm near Edmonton where he once won northern Alberta's 4H livestock raising championship .... but it was not until 1988 that Reform's head cowboy formed his first posse. Campaigning against the incumbent Progressive Conservative, Joe Clark ... Reform's new leader hatched a publicity stunt before a debate in the town of Jasper. A 'Reform Posse' of riders, complete with Reform banners and saddle blankets, was organized to chase down the ex-prime minister, who was scheduled to arrive at the local train station. It was High Noon for Mulroney's token westerner. 'The posse and Sheriff Manning were in pursuit of the notorious Joe Clark' ....

"To the disappointment of the fifteen horses and riders looking for a political lynchin', Clark never showed; his train was delayed. The Reformers still had fun handing out 'Wanted' posters and posing for pictures with tourists ..." (5)

Manning lost and he lost soundly.

A New Party and a New Nemesis

From the time that Stephen Harper was made the leader of the Alliance Party, he started a war against Joe Clark and the Conservatives. He didn't try to negotiate an alliance but told Clark to "stop pissing around or get out of my way." He wanted to devour the PC party and Clark fought back.

This prompted an abuse of his franking privileges, when Harper sent out letters to PC party members suggesting that Clark was misleading his party.

And when Joe Clark fought desperately to hold onto what was started by Sir John A. MacDonald, never joining the "new" neoconservative spin-off, he knew exactly who Stephen Harper was, and he knew what this party represented.

Former PC member of parliament , Flora MacDonald called it "... the demolition of a historic 150-year-old institution that has done so much to build this country... and claimed that "The party's future lies not in some right-wing alliance that would violate the progressive and moderate traditions of its former leaders, but with a renewed emphasis on the values that the great majority of Canadians feel represent their views." (5 )

So when in 2004, Joe Clark called Stephen Harper "dangerous", it was not based on sour grapes, but on decades of fighting against a destructive movement, that promoted divisiveness, was run by "hooligans, emotion run amok, with a stab of fear."

Canadians should have listened.