The Politics of Sucking Up: Handling the Quebec Question 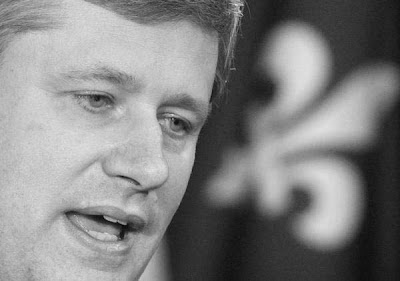 "Look. I've got to suck up to Quebec, so just shut up and let me get on with it." Stephen Harper (1)

When Stephen Harper announced that he would be giving Quebec a "distinct society" status, many of his supporters were shocked, including his minister of Inter-governmental affairs, Michael Chong, who was not consulted on the plan. He resigned his position as a result.

This was a complete 180 for a party that had always taken a strong stand against Quebec nationalism.

The Reform party is very much a modern manifestation of the Republican movement in Western Canada; the U.S. Republicans started in the western United States. The Reform Party is very resistant to the agenda and the demands of the secessionists, and on a very deep philosophical level. (1997 speech to the
Council for National Policy) Stephen Harper (2)

When Stephen Harper suggested that the Reform party was against giving into Quebec on a "very deep philosophical level", he meant it. It was very deeply ingrained.

Preston Manning was a fan of Abrahm Lincoln and in many ways saw himself as the man who would unite the country by getting tough with Quebec. He even hinted that violence may be necessary and often worked parts of Lincoln's 'A House Divided' speech into his own.

The Reform Party would represent English Canada with an Anglo hierarchy. French would be "allowed" in Parliament and the courts, but not mandatory anywhere. (3)

So it's interesting from Lawrence Martin's Harperland, that Stephen Harper was only interested in Quebec for his own political gain. A superficial gesture just for show.

But then he blew it when he went ballistic during the 2008 coalition "crisis", painting the entire province with a separatist brush. And his rhetoric further inflamed the West against La Belle Province. His remarks about the unsuitability of the Bloc Québécois involvement in the proposed Liberal-NDP coalition were characterized by professor C.E.S. Franks of Queen's University, Kingston, as "inflammatory and tendentious rhetoric' . (Globe & Mail, March 2009).

I remember comments at the end of online articles, often becoming so visceral, the editors would have to close down the comments section. One man suggested that "the boys from Alberta" need to come down and teach those you know what a lesson. It was horrible.

Dennis Pilon, a political scientist at the University of Victoria, stated that : "I do not mean to be an alarmist in suggesting that we may be heading for violence. But the actions of this prime minister are coming dangerously close to inciting mob rule." (4)

I don't think Stephen Harper or the Reform Party really understood Quebec grievances or their French-Canadian culture. He was often dismissive. When on Fox News in 2003 telling Canadians that Chretien was wrong not to go to Iraq, he suggested that "Only in Quebec, with its "pacifist tradition," are most people opposed to the war. Outside of Quebec, I believe very strongly the silent majority of Canadians is strongly supportive."

Quebec may have a "pacifist" tradition but they are not unlike most Canadians in that regard.

And then when speaking to the American Council for National Policy he brought up the Meech Lake Accord and the demands made by the province.

The establishment came down with a constitutional package which they put to a national referendum. The package included distinct society status for Quebec and some other changes, including some that would just horrify you, putting universal Medicare in our constitution, and feminist rights, and a whole bunch of other things.

I guess it also means he doesn't understand the rest of us either, because most Canadians would not be "horrified" by universal Medicare, feminist rights and "a whole bunch of other things" (aka: gay rights).

But now that we know he was only "sucking up" to Quebec, and "had to get on with it", then it's all OK. Wink. Wink.