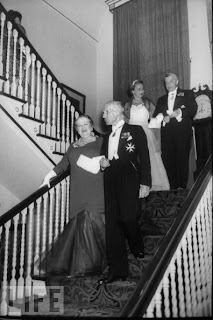 During WWII, when Vincent Massey was high Commissioner in London, his personal assistant* wondered what was the sense of all the protocol. Bombs were going off around them and he was expected to pay attention to the smallest details.

But what he learned from Massey was:

"... that protocol is really a language, a set of rules and conventions which enable people of different nationalities, social backgrounds, and political persuasions to feel comfortable with each other, to avoid embarrassing
situations, even to enjoy each other's company." (1)

So while we can scoff at the formal and ceremonial aspects of diplomacy, what we need to understand is that an important component of diplomacy is respect, and that includes respecting another nation's customs and their leaders.

I'm still reading Lawrence Martin's Harperland, and I don't quite know what to think of it. It's filled with contradictions.

Being billed as explosive before it's release, I'm finding much of it is excusatory. Martin brings out a lot of the more irrational components of Harper's character, but then will seemingly go out of his way to excuse them.

I never expected the book to be anti-Harper, and would have been disappointed if there was no balance. But while Martin flippantly highlights Harper's extensive use of profanity, that will only shock the Religious Right, who once believed he was an Evangelist; he glosses over the areas that should be shocking to all Canadians, since they have a profound effect on our future.

When Stephen Harper dismisses our diplomats as "glass clinkers", Martin agrees. I found that quite alarming.

The book does take note of our prime minister's inexperience in foreign affairs, but then claims that because he talked about the Cold War with a friend, that made up for it. I talk about a lot of things with friends. It doesn't make me an expert on any of them.

And to top it off, no one in his caucus was any better prepared.

Given that, you would think that they would then turn to the diplomats. The ones who not only learned foreign languages but also the language of protocol. The things that break down barriers and pave the way to negotiations.

But the exact opposite happened. Stephen Harper has continually undermined our foreign service, because their knowledge of the world, contradicts his own; which is really a lack thereof.

Harper may have discussed the Cold War with his friend John Weissenberger (2), but unfortunately his understanding of world issues ends there. His foreign policy is based on ideology and the appeasement of religious extremists.

The danger of that is glaring. It is something that cannot be excused or brushed off with silly notions that discussions with a friend can replace the advice of those in the field.

And unfortunately that applies to every other decision this government makes. Experts are "university types" and advocates are "special interest groups". I find it all inexcusable.

I'll finish reading the book before I pass a final judgement, because I am very much a fan of Lawrence Martin. But so far ... ahhhh!

* That personal assistant went on to become one of Canada's longest serving diplomats, dubbed a 'peacemonger' by the press. A title he wore with pride. He would go on to marry Vincent Massey's niece, and in fact proposed to his future bride at Massey's home. The family was pleased. Her name was Alison Grant who would become Alison Ignatieff and the mother of Michael Ignatieff.

The Politics of Jabberwocky: As Canada Plummets Down the Rabbit Hole

The Politics of Ballyhoo: David Emerson and the Soft on Sovereignty Trade Deal

The Politics of Religious Nationalism: Taking us Down a Dangerous Path