Patriot Games, Wasps, and Ideology: Where it all Began 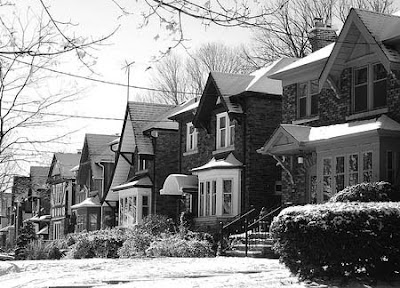 In his book: Stephen Harper and the Future of Canada, William Johnson describes Harper's early life growing up in the Toronto suburb of Leaside.

Leaside boasted that it was Ontario's only municipality built entirely according to a pre-designed plan. Many of its streets were curved, some crescents. Stop signs were frequent, discouraging through traffic. The ubiquitous trees and lawns gave a pleasant green look, and the narrow lots each contained a single-family dwelling flanked by a driveway leading up to a small garage. The Harper home, a red-brick two-storey house with a bay window and a small fireplace in the living room, on a lot that was 33 feet wide, and 138 feet deep. It had a tree growing on the front lawn and another tree in the fenced backyard. (1)

It all sounds so Truman Show. A "pre-designed" normal life, with little through traffic to upset the status quo. It could have just as well been a movie set. And with 85% of the residents being of British ancestry, Johnson called it the quintessential WASP middle-class suburb.

85% White Anglo-Saxon Protestant, with no other ethnic group in notable numbers.

And everyone conformed or else.

The Leaside Council was .. preoccupied with forbidding bowling on Sunday, the day the Lord rested. On February 23, 1963, when Stephen was not yet four, the Leaside Council rebuked two local enterprises that had engaged in commercial activity on Sunday. According to the minutes, "The Theatre of Bayview has been opened on Sundays and now Bowlerama in Thorncliffe Park. A letter will be sent informing them of the violation of the Lord's Day Act." But, already, the community was going to the devil. The minutes of Leaside Council for March 1, 1965, reported: "Tennis was added to the list of games permitted on Sundays." (1)

So when Stephen Harper graduated from high school and headed to the University of Toronto, it must have been quite a culture shock. Is this why he dropped out after only 3 months?

It's very difficult to understand just who he really is. I've read every book I could find on the early history of the Reform Party, but since Harper has given very strict instructions that no one is allowed to discuss his early life, it's hard to determine what has made him who he is today. He is a man with many secrets.

So I've started reading some of the authors and books that were said to have inspired his political thought, and it would appear the most important one was The Patriot Game, written in 1986 by Peter Brimelow. According to Johnson, Harper was so enthused after reading it that he went out and bought ten copies to give to friends. He called it a "journey of discovery". (2)

I'm now reading The Patriot Game and already in the author's notes, something has struck me.

"I am a wandering WASP", says Brimelow, but that is not it. He goes on to say:

My qualifications for writing a book about [Canada] [leaves me] vulnerable to attack from hostile natives. The obvious defense is to point out that there is a long tradition of insight by outsiders into a nation's character. ... There are important human reasons why outsiders can see, and even more to the point say, things that insiders cannot. In the course of this book, I am disrespectful of much that Canadians are nowadays encouraged to identify with their nationhood. Indeed, I argue that contemporary Canadian Nationalism is a fraud, designed primarily to benefit particular interest groups in Canada.(3)

He argues that English Canada does not take pride in it's roots.

This raises the question of my attitude to French Canada. One of the symptoms of pathology in Canadian politics is that any expression of affection for English Canada is automatically taken to imply anti-French "bigotry." (3)

Brimelow is indeed an outsider, who may have thought he was visiting an English colony when he arrived here. Because what he doesn't understand is that as a multicultural country, Canadians take pride in their varied roots. We celebrate our Irish heritage, our Scottish heritage, our Indian, Welsh, Bulgarian, Arab, Aboriginal .. and the list goes on.

It is all part of the Canadian mosaic.

But to a young man growing up in a "pre-designed" WASP neighbourhood, where mothers stayed home and raised their children, and everyone attended the same Church, and no one worked on Sundays; Brimelow's words must have resonated. They validated his thoughts. During the time of a rights revolution, when everyone was demanding equality, he could now justify his objections.

And when he spoke to an American audience, disdainfully calling Canada a 'Northern European welfare state in the worst sense of the term', he was speaking as an outsider. And when we were 'a second tier socialist country boasting ever more loudly of our second rate status', it wasn't his country he was speaking of.

Peter Brimelow would continue his campaign of 'English' pride, and now refers to himself as a paleo-conservative, what most of us once referred to as a white nationalist. He argues that white people should be proud of their race, as if skin colour denotes a common heritage.

And this sentiment would be fundamental to the Reform Party, when Stephen Harper drafted their policy and worked behind the scenes to launch the movement.

... the notion that some Reform members may have strong Anglo-Saxon nativist inclinations is supported by more than merely the background profiles of its leaders, members and supporters. It is supported also by the words of many of its ideological mentors who depict Canada as not only historically an Anglo-Saxon country but also part of a wider Anglo-Saxon culture that is in need of recognizing and re-establishing its heritage.

Read for example Peter Brimelow's words bemoaning the eclipse of Anglo-Saxon hegemony.'At the end of the nineteenth century, belief in the superiority of the Anglo Saxon values ... [was] the most social norm in every English-speaking country ... For WASP supremacists everywhere, however, the twentieth century has been a most distressing experience. (4)

It was also through Brimelow and The Patriot Game, that Harper refined his visceral hatred for the Liberal Party. In fact the book was based on that contempt. Brimelow blamed the Liberals for fixating on federalism and prolonging "Trudeau's fantasy" of blending Anglophones and Francophones into one bilingual whole.

He refers to it as "Liberal ideology" and the name Patriot Game came from this "radical mutation".

And throughout his book he capitalizes Liberal in his diatribes, obviously meaning the party and not simply liberalism as a whole.

So maybe by reading this book I can get a better idea of what this prime minister has in store for us. So far, it's almost frightening, how clearly Harper's thoughts came from this Brit. The wandering WASP, viewing Canada as an outsider. An outsider who thinks we should be acting more like a British Colony than the mixed up multicultural mess of a wonderful nation that we are.

Patriot Game and Bilingualism: A God That Failed?

Patriot Game and the Federation of Founding Peoples

Patriot Game and the Committee for an Independent Canada

The Patriot Game: The Charter of Rights