A Deceptive Democracy: On His Knees and Out of His Head 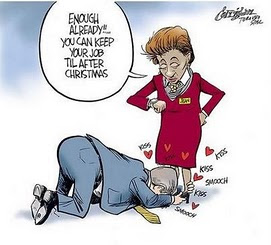 Another chapter of the book Parliamentary Democracy in Crisis, was written by Ned Franks, who taught at Queen's University for over thirty-five years in the Department of Political Studies, and is an expert in Parliamentary procedure.

He sought to answer the question: "did the Governor General make the right decision" when she allowed Stephen Harper to close down Parliament in 2008, to avoid facing a confidence vote that would have assuredly exiled him to opposition.

Under the circumstances, she probably made the only decision she could have at the time, and the real threat to democracy was the fact that Stephen Harper asked for it in the first place. It set a dangerous precedence.

When Harper presented his own coalition, that included the full support of both the NDP and Bloc, to then Governor General Adrienne Clarkson in 2004, she says in her book Heart Matters, that Paul Martin came to her requesting that she step in, dissolve parliament and call another election. But she refused. (1)

Instead she told him to fix it and he did. Besides, by then Harper's coalition was crumbling, as Jack Layton had a change of heart, and backed out.

Adrienne Clarkson actually wrote the forward for Parliamentary Democracy in Crisis, and she says that: "In November/ December 2008 there was an enormous interest in the functioning of our political system accompanied by an abysmal lack of knowledge about the system. The idea that we were in crisis is something that I personally take with a grain of salt. Just because a resolution has to be found does not mean that the situation is a crisis." (2)

The only threat (crisis) was Stephen Harper losing his job, and what he did to keep it was not only undemocratic but reprehensible.

It's important to revisit this now, because the Harper government is trying to replicate that "crisis" by once again presenting a coalition as a "threat".

But Back to 2008 and the Winter of Our Discontent

Those are the words of Ned Franks, but while he suggests that precedence should have prompted the GG to refuse Stephen Harper, reality dictated that that may have been a mistake.

As he delves into the political climate at the time of the potential removal of the Harper government from power in 2008, he concludes that the Governor General at the time made the right decision. He does not base it on any notion that Harper was right for the country, but on the inevitable outcome if the coalition had been allowed to form a government.

Harper was not a strong leader, but he had the most money behind him and was able to launch the most effective public relations campaign. And that campaign was filled with, as Franks reminds us, "misrepresentations and half-truths", including the suggestion that the electorate had given him a stronger mandate. The Conservative vote count was down by almost 200,000. Only vote-splitting and apathy (the lowest voter turn out in our history) gave him more seats. So he was not the "choice of the electorate", only the choice of roughly 1/3 of those who bothered to cast a ballot.

This means that more than 60% of active voters, voted against his party.

But because the destruction of Stephane Dion had been so complete, a Dion led government was not palpable to most Canadians, including many Liberals. And we know what would have happened. The Conservatives in opposition, with their corporate sponsors, would have made it impossible for anyone else to govern.

And a country already fragile form the economic crisis, would have surely been in serious trouble. Sadly, this would not concern Harper at all. He is motivated by hatred and contempt and hates to lose.

However, I think they might be making a mistake dredging up the "coalition" nonsense now, although it may be all they have left. As David Climenhaga says: "this scare story is certain to be the No. 1 talking point of the scorched earth federal Conservative election campaign that's coming soon, and Harper and Flaherty, not to mention all the other little Tories, will be stickin' to it."

The biggest problem with the 2008 coalition was the "Dion factor". But despite similar never ending attack ads, Michael Ignatieff is still standing. And with the Harperites continually calling this the "Ignatieff coalition", that, while imaginary, would mean he headed up a government representing 2/3 of Canadians, they might actually be campaigning for him.

Any marketing person will tell you that it's all about name recognition.

And as the Harper government's corruption, and unheard of abuse of tax dollars for self promotion, continue to dominate the news, they might just be presenting voters with the choice between Harper and a majority headed by Michael Ignatieff, who they have helped to make a household name.

3. Harper From Pugnacious to Dangerous