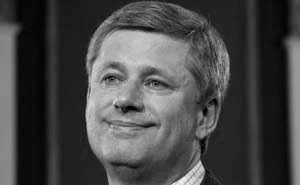 In September of 2009, journalist and author, Murray Dobbin, wrote for the Tyee:

It seems irrefutable to me after 20 years of analyzing the career of Stephen Harper that he is incapable of providing democratic governance. Harper arguably shows some traits of what psychologists refer to as malignant narcissism, a dangerously heightened sense of self importance. Otto Kernberg, a leader in the study of personality disorders, describes malignant narcissism as "extreme self-absorption and insensitivity that often result in a trail of victims -- emotional wreckage left in the narcissist's wake." The victims Kernberg refers to are, of course, individuals, but in our case the principal victim is the Canadian nation -- its humanist accomplishments, its art and culture, the foundation of its science, its international standing and its democratic governance. (1)

At the time I agreed with his analysis, but only superficially. Harper's arrogance was revealed in everything he did, but I didn't really view it as a possible illness.

Then I came across a piece by Green Party leader Elizabeth May, that showed Harper's love of self in a different light. She had been acting as Speaker of the House for the Queens University Model Parliament, and had an opportunity to visit the Government Lobby.

The Government Lobby was a frequent work space when I was Senior Policy Advisor to the federal Minister of Environment back in the mid-1980s ... [but] it did not strike me until I walked into the Government Lobby to await my turn as Speaker that I had not been in there since Stephen Harper became Prime Minister. It used to have some paintings on the wall. Past prime ministers, certainly a formal portrait of the Queen. Landscapes. I know there was the occasional photo of current Prime Ministers, but when I walked in this time, I felt chilled to the bone.

This was later confirmed in the Ottawa Citizen. (3)

I bring this up often, because it kinda' freaks me out. I'm a fan of shows like CSI and Criminal Minds, and it reminds of a stalker's lair. Only he's stalking himself. Creepy.

I just finished chapter two of Lawrence Martin's new book, Harperland, and while he is doing a very good job at keeping balance, there are some revelations that help to unravel the complexities of Stephen Harper.

And what's interesting is that the most compelling statements come from insiders. People left in the "emotional wreckage [of] the narcissist's wake", but remain for the most part supportive.

Martin says that Stephen Harper has tried to emulate Pierre Trudeau, not politically, but by replicating the things he used to stay in power for so long. He fails to understand that we liked Trudeau in spite of those things, because he was moving us in the right direction. His legacy is the Charter of Rights and Freedoms.

But even with those whose politics he agrees with, Stephen Harper has always been more concerned with how they achieved and held onto power. In William Johnson's book Stephen Harper and the Future of Canada, he speaks of Harper's fondness for Margaret Thatcher.

And yet the story was not "let's study her policies and adopt them". But instead he and his friend John Weissenberger, read all of her election speeches looking for the right phrases to "win". (4)

But there is something else that goes back to the notion of Stephen Harper being the clinical definition of a malignant narcissist.

His friends and colleagues when speaking to Lawrence Martin, used terms like "cold", "He doesn't have human warmth", "sunless", "an emotionless robot". A former classmate called him "aloof" and said that "If there was a social event going on, he'd be the guy in the corner; pen and paper in pocket, looking at us in a kind of condescending way." (5)

The Encyclopedia Britannica defines narcissism as a:

Mental disorder characterized by extreme self-absorption, an exaggerated sense of self-importance, and a need for attention and admiration from others ... narcissism is characterized by an unusual coolness and composure, which is shaken only when the narcissistic confidence is threatened, and by the tendency to take others for granted or to exploit them.

Stephen Harper is his happiest when he's at a photo-op. You can see it. He's not acting, so his robotic nature is gone. He's in his element. All of these people focused on "him". All dedicated to making "him" look good. All paying "attention" and filled with "admiration" for "him". His "unusual coolness and composure" are gone, even if only for that brief moment in time.

And we've seen him "shaken" when his confidence was threatened. Look at how he acted in the House of Commons during the coalition threat. Or when Michael Ignatieff was challenging him and he suggested that he had been pouring over old tapes. His confidence was gone and it was visible. What we witnessed was panic.

And there's no argument that he has a "tendency to take others for granted or to exploit them". A common complaint from insiders. Look at how easily he can exploit religion, or the immigrant population for political gain. A man who is not religious and has referred to multiculturalism as a "weak nation strategy", can turn himself into a supporter so easily. He's like a Chameleon, changing colours to suit the situation.

So while he learned the art of the attack ad from Arthur Finklestein, and was indoctrinated by the anti-liberalism, anti-communist crowd; his real passion is power. The ultimate aphrodisiac for the malignant narcissist.

And with that I've come to realize something else. While he does follow the neoconservative principles adhered to by people like Margaret Thatcher, Ronald Reagan and Roger Douglas, I also sense a bit of contempt.

While all three of those people did a great deal of damage, and widened the gap between rich and poor irrevocably, they also had something else in common. They all failed to finish the job they started.

I think that Stephen Harper believes in his condescending, narcissistic way, that he will win. That he will be the first to reach the ultimate goal. He will no longer be a "follower" of Thatcherism, Reaganomics or Rogernomics. Future neocons will follow him, and "Harperism" will be their battle cry.

He may be delusional, but no one has ever accused him of being sane.

And who knows. Maybe if he can hold onto power long enough ....

1. Stephen Harper, Unfit to Govern: Few are thrilled to have another election, but we must put it to good use, By Murray Dobbin, The Tyee, September 10, 2009

3. Harper gallery leaves MPs speechless: Citizens who really want a national portrait gallery in Ottawa can rest easy. The government already has one, By The Ottawa Citizen, January 29, 2008