The Politics of Jabberwocky: As Canada Plummets Down the Rabbit Hole 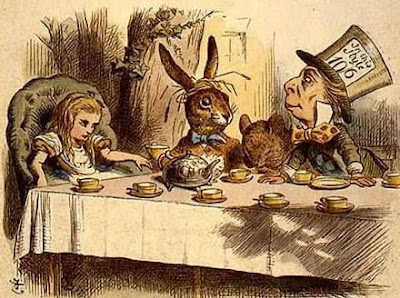 Watching Question Period, something I no longer do, is like stepping into a parallel universe, since the Harper government came to power. They perform like they are in opposition.

But even more than that, their performances are unusual. Almost frightening, as if something has possessed them. It's like a really bad play, that while it offends and leaves you embarrassed for the actors, also keeps you spellbound. Can this really be this bad? Will the plot finally be revealed that explains their actions? Will Canadians stand up and cheer when it reaches it's climax, or simply demand their money back?

In Lawrence Martin's new book Harperland, he explains why during Question Period, everything appears both robotic and chaotic at the same time. The performances of the Conservative MPs are pre-scripted and they actually hold "dress rehearsals" before the big show.

[Says adviser Keith Beardsley] "I'd throw the question out and the PM would be sitting there watching. And if the minister wasn't prepared, Harper knew it." The ministers had their own briefing books with preset answers. "But the last thing they wanted to do was to be frantically looking through their books with the prime minister staring at them.' When an iffy answer was given, Beardsley would look over at Harper with raised eyebrows, as if to say, "What do you think?" And Harper, he recalled, "would just shake his head like 'That's no damn good."' (1)

And according to David Emerson the Liberal MP who crossed the floor immediately after winning his seat as a Liberal:

"You'd go through a dry run as to what was going to be said, and the prime minister himself would intervene regularly to shape someone's response to an issue. And the discipline was amazing." So were the results. The prep session was remarkably accurate in forecasting what would be asked during Question Period. "You'd probably capture 90 percent of what was coming..."(1)

Now this would be admirable if the script dealt with the issue, but it does not. It only provides ammunition for an attack on the person asking the question.

It was clear from the start .. that all the prepping was not intended to produce candid answers to opposition queries. The strategy was not to reveal information but to shield it and counterattack ... Harper's cabinet had documented Liberal failures on every conceivable issue. On some days, the Tories turned almost all of the Opposition queries into a counterblast. All governments had used this tactic, but it soon became apparent that this government would exceed all others. The Conservatives didn't mind looking evasive. They didn't mind if it looked intellectually infantile to defend their own inadequacies by pointing to the inadequacies of others. (1)

I'm reminded of an incident when my children were younger. After calling his sister "stupid", my daughter responded to my son, with "well at least I'm not as stupid as you are". To which my brilliant boy fired back "You are so".

During the first year of Harper's government, one of their favourite responses to any question was the inclusion of "for the past thirteen years", referring to the length of unbroken Liberal reign.

But they got a little carried away, allowing it to exceed it's best before date, until NDP Pat Martin reminded them that they were now part of that "thirteen years". They never used it again.

I wonder how future historians will view this period, and what their impressions will be of the Harper government, after reading the transcripts? They will no doubt determine that this was a group who was functionally illiterate, intellectually depraved and categorically insane. How else could you explain it?

Jabberwocky was the name of a poem of pure nonsense, included in Lewis Carroll's Through the Looking Glass. I used to think that the Conservatives behaviour was like 'Lil Abner meets the Muppets', but then after reading Elizabeth May's description of their antics, that poem immediately came to mind.

You need a special dictionary to translate what the Harperites are trying to say. Some call it Orwellian, but I think that's too deep. Nope. It's pure Jabberwocky.

’Twas brillig, and the slithy toves
Did gyre and gimble in the wabe;
All mimsy were the borogoves,
And the mome raths outgrabe.
Brillig is simply 4 o'clock, 'slithy' is 'lithe and slimy' 'Toves' are "something like badgers, something like lizards, and something like corkscrews" (undefinable creatures), while "gyre and gimble," means to "rotate and bore". Mimsy is 'flimsy and miserable' 'borogove' a thin shabby-looking bird, 'Mome' means to seem 'grave' and 'outgrabe' is something between bellowing and whistling. So the translation:

’Twas 4 o'clock and the undefinable creatures
Did rotate and bore on their thistle;
So flimsy and miserable were these shabby birds,
That they gravely began to bellow and whistle.

Or as Elizabeth May says:

Heckling has become much more common over the last two decades or so ... [but] it has now become far worse. One unpleasant aspect to the current heckling is the willingness of the government front benches to engage in rude shouting across the floor. Bad behaviour used to be reserved for backbenchers who tended to remain rather anonymous in their interruptions. Even when such opposition heckling was notorious, as in the case of the famous Liberal "Rat Pack," it was by a scattering of MPs, not by an entire caucus and rarely, if ever, by government ministers. Under the current government, a number of ministers will initiate heckling across the floor. The prime minister himself does not stoop to it, although it is clear that he encourages a pit bull approach from his ministers on certain files. (2)

“Beware the Jabberwock, my son!
The jaws that bite, the claws that catch!
Beware the Jubjub bird, and shun
The frumious Bandersnatch!”

Jabberwock is "offspring". The Jubjub is "a desperate bird that lives in perpetual passion". Frumious is a combination of "fuming" and "furious", and Bandersnatch, "a swift moving creature with snapping jaws".

“Beware the horrible offspring, my son!
The jaws that bite, the claws that snare!
Beware the desperation, and shun
The snapping jaws of little Pierre!"

A perfect description of Pierre Poilievre. The little man-boy who struts around in perpetual passion, with jaws flapping and snapping. A perfect Bandersnatch. Belligerent and aggressive, Harper pulls him out when the questions get tough and they have no script.

He's been known to flip the bird, use profanity, and once even did a little pixie dance when the Speaker of the House was asking his caucus to settle down.

He took his vorpal sword in hand:
Long time the manxome foe he sought—
So rested he by the Tumtum tree,
And stood awhile in thought.
Vorpal is "verbal" and "gospel", manxome "manly" and "buxom". Are you seeing Jason Kenney? I know the manly is debatable, but remember when he denied removing the protection of gays and lesbians from the citizenship guide, then ran out the door in tears? He was later forced to admit to his dirty deed, but running away with his buxom chest extended is his modus operandi.

"He took his Bible on tape in hand:
Looked into the mirror, the foe he sought—
Then rested he by the Tumtum tree,
In hopes that his nonsense they had bought!"

Jason Kenney to a tee.

And as in uffish thought he stood,
The Jabberwock, with eyes of flame,
Came whiffling through the tulgey wood,
And burbled as it came!

Uffish means "when the voice is gruffish, the manner roughish, and the temper huffish". Jabberwock another offspring. Tulgey is "thick, dense, dark". Burbled is "a mixture of the three verbs 'bleat', 'murmer', and 'warble'".

Grouph, rough and in a huff he stood,
The Jabberwock, with eyes of flame,
Came whiffling through thick, dense and dark,
Bleating and warbling as he came!

It is so much easier to understand what the Harper government is saying when you realize that it is Jabberwocky.

Like when Stephane Dion, then leader of the Opposition asked for information about press reports of the ill treatment of Afghan prisoners. Instead of answering the question, Stephen Harper responded in typical fashion.

Stephen Harper attacked Dion and questioned why he cared more about the Taliban than our own soldiers. [March 21, 2007]. I actually felt the air being squashed from my lungs, so deep was my shock at this answer from the prime minister: "I can understand the passion that the Leader of the Opposition and members of his party feel for Taliban prisoners. I just wish occasionally they would show the same passion for Canadian soldiers." (2)

"T'was late in March when the slithy tove,
Did gyre and gimble in the House;
And mimsy were his arguments,
His outgrabe that of a louse."

It's easy really. Jaberwocky. It doesn't have to make sense, and clearly it never does.

But maybe Alice says it best: 'It seems very pretty, but it's rather hard to understand! Somehow it seems to fill my head with ideas— only I don't exactly know what they are! However, somebody killed something: that's clear, at any rate.'