The Politics of Obscurantism: Then You Control the Press 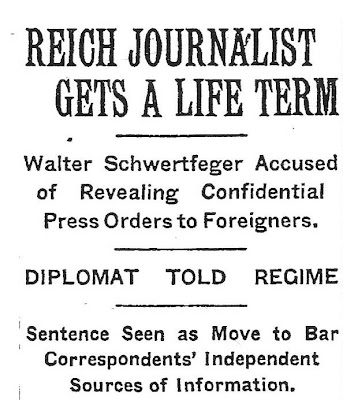 "Think of the press as a great keyboard on which the government can play.” - Joseph Goebbels

Stephen Harper's manipulation of the Press is legendary, and I've posted on it often.

But when viewed through the lens of Obscurantism, something a friend suggested I examine, everything becomes much clearer.

It ties Leo Strauss, neoconservatism and the Harper government together quite nicely.

Obscurantism is the art of obscuring the facts. It's deliberate and reaches to the emotions of the populace, rather than their intellect.

A normal political tool, but under Harper it has become an art form.

And to achieve this state, all messaging had to be controlled. But not to worry. They say it's for our own good.

A Crime to Practice Journalism

He held in his thin, knob-knuckled hands last week a new National Press Law making it a crime to practice journalism in Germany except as a licensed member of a nationwide closed shop. The law covers "all persons who take a share in forming the mental contents of any newspaper or political periodical through the written word or pictures." (1)

Harper's silencing of the press was not done with a National Press Law, but through a steady erosion of access. It started with the practice of not announcing cabinet meetings to avoid media scrums.

Harper never liked the tradition of holding media scrums after cabinet meetings. He started concealing the times of those meetings to keep his ministers away from the microphones. Cabinet and caucus members, with few exceptions, were instructed to avoid talking to the media without prior approval. At press conferences, Harper's office also wanted to control who asked questions. The press conferences were limited to specific issues as Harper did away with the wide-open meetings with the media, which had been a long-time custom ... (2)

Time magazine covered these "secret" cabinet meetings, and while legally the government had to announce them, Harper would wait until the meeting was well underway before meeting his legal obligations. And in describing one of those announcements:

...the veiled wording of the advisory--"There will be a Government media availability, today in the foyer of the House of Commons"--was almost Soviet in its stiff obfuscation ... Canadians should be worried when they see the government trying to exert such an unprecedented level of control." (3)

They also quoted Alasdair Roberts, a Syracuse University public-policy professor, who asked, "How can the average Canadian make a judgment about whether their government is being well run if they don't have access to the information?" (3)

Walter Schwertfeger was a well-known Berlin journalist. When Joseph Goebbels, Minister of Popular Enlightenment and Propaganda, announced the new rules to the German media, Schwertfeger went public, venting with the foreign press.

For this he was charged with treason against the State and given a life sentence.

The case.. has been something of a sensation both in German and foreign newspaper circles, as well as diplomatic quarters in Berlin, because Walter Schwertfeger was understood to have been arrested for supplying foreign correspondents and diplomats with some confidential instructions isued to the German press by Dr. Joseph Goebbels, Minister of Popular Enlightenment and Propaganda ... Schwertfeger's sentence is the seventh passed thus far on Germans charged with the crime of supplying foreigners with any kind of information.

It is in line with the steady extension of the treason laws and practice of the People's Tribunal, designed to make the whole German nation a "community of oath-bound men" tightly shut off from prying 'foreign eyes, not only in respect to military affairs, but to all others as well. Particularly it may be assumed to represent a warning to all Germans not to give foreigners any kind of information, in order to shut off foreign observers here from their independent sources of information and restrict them to their official propaganda agencies. (4)

Stephen Harper began with warnings and then became more aggressive with the media if they dared to challenge him. When two journalists were held hostage on a plane (5), one of them David Aken, justified it by saying:

Harper's detractors may think we should just give the metaphorical finger to such directives from the PMO but, at one photo opp while we were here, a reporter who did just that and asked a question at a photo opp, despite warnings not to, was immediately warned that, if she continued, reporters would no longer be allowed to attend such photo opps. That would not be good for our access would be curtailed even further.

PMO staff also made veiled threats that that individual's organization might suffer further sanction -- all because of the impertinence of asking a question. If you are a media organization in Ottawa, these are no small consequences. (6)

And then there's those large RCMP bodyguards who make sure that reporters do as they're told. This video used to show Bob Fife being knocked to the ground, but was later edited, removing that part. More obstruction.

During the G-20, the media was targeted, beaten and arrested. Even Steve Paikin, one of the more conservative in the media was shocked. And he was not alone.

Reporters covering the G20 summit in Toronto say they were the target of police violence overnight, as riots blamed on anarchist groups left four police cars burning in the financial district and resulted in the arrests of some 150 people. "A newspaper photographer was shot with a plastic bullet in the backside, while another had an officer point a gun in his face despite identifying himself as a member of the media," reported the Canadian Press news agency. The agency did not say if it was its own reporters who were targeted.

The Huffington Post showed Brandon Jourdan being thrown to the ground and beaten by police while shooting video, and female journalists were threatened with rape.

And despite all this, the message was that Harper and his riot squad did a good job. The burning police cars were evidence that the one billion for security was money well spent. This even after the police admitted that they were told to stand down, and let the vandals do their job. Other video shows the police walking away from the carnage.

Who made the decision for police to stand down despite the fact the city was under attack? And why? Was it a police decision or political? These should be the cornerstone questions of an external review surrounding the chaos of the G20. After all, police officers were trained to stop the Black Bloc anarchists, were appropriately equipped and massively manned.

As downtown Toronto witnessed burning police cars and a small group of thugs on a rampage, a police source tells me the only thing that stopped the officers from doing that was an order telling them not to. They tell me they could have rounded up all, or most of them, in no time. I have had several frontline police officers tell me they were told not to get involved. But even before that decision was made, says one insider, there was mass confusion and indecision. (7)

All part of Obscurantism. Twisting the message by manipulating and then distorting the facts, while putting the media in it's place.

And Stephen Harper has not made one single statement to explain himself.

But then, he doesn't have to. We are the commoners who are "unworthy of knowing the facts".