The Politics of Obscurantism: Embracing Fanaticism

Jan Brown was a Reform MP when Preston Manning was the party leader. She was smart, urban and moderate, best remembered for putting a rose on the empty chair of Lucien Bouchard when he was recovering from "flesh-eating disease", that resulted in his losing a leg.

She was a refreshing contradiction to a party well known for it's racist and sexist views.

So when Reform MP Rob Ringma suggested that business owners should be allowed to demand that gays and ethnics move to the back of the store, if it meant that they could lose business otherwise; she spoke up. And when at about the same time, Reform MP Dave Chatters suggested that schools should be allowed to fire gay teachers, she again protested. But when Reform MP Art Hanger planned a trip to Singapore to investigate 'caning' as a form of youth punishment, she'd had enough, and went public, speaking out against the rampant racism of the party's 'God squad'. (1)

At the next caucus meeting, while Ringma got a standing ovation, Brown was ostracized and suspended. She quit. And Manning allowed her to quit, because he would gain far more political leverage from the 'God Squad', than he would from what Stephen Harper would call a "pink Liberal" or Margaret Thatcher a "wet". Moderates were welcome but radicals were courted.

When Stephen Harper's Alliance Party swallowed up the few remaining Progressive Conservatives, he had a meeting with PCer Scott Brison. He told him that he was impressed with his economic skills and wanted him to play a prominent role in the new party. But Brison, who had already been ridiculed by the Alliance gang because of his sexual orientation, asked Harper where he would fit. He was told that a large part of their base was social conservative, and he would not change that. Brison got the message and crossed the floor to the Liberals. (2)

Instead we got stuck with Jim Flaherty as finance minister, a man who was deemed too right-wing to head up the Ontario PC party. 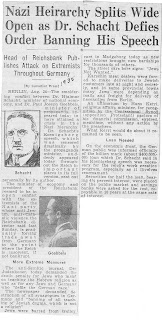 On August 24, 1935; the Canadian Press ran a story of internal conflict that was threatening the Nazi Party.

The smoldering conflict between Dr. Hjalmar Schacht, minister of national economy, and Dr. Paul Joseph Goebbels, minister of propaganda, appeared today to have attained a crisis in the Nazi hierarchy. Dr. Schacht's Koenigsberg speech, which was censored drastically by the propaganda minister, suddenly
appeared today throughout the Reich in important places in its full version, sent out personally by its author.

The minister of economy and president of the Reichsbank Bank seemed to be in open conflict with the extremists of the Nazi party, whose anti-Jewish anti-Catholic violence, the Reichsbank director said last Sunday, is gradually forcing trade away from Germany to the point where the Reich is insolvent, if not bankrupt. (3)

And despite the fact that he was a brilliant economist, Schacht was eventually forced out of the party, because they needed the radicals more. Although, I think it's telling that seeing as how Schacht was Jewish, he wasn't exterminated. But then according to Social Creditor Réal Caouette*, 'Hitler exterminated only "useless Jews."' (4)

Why is it then when any of us liberals or progressives remind people that neoconservatism is fascism, we're dismissed as alarmists? And yet the right-wing paints all of us with a communist/socialist brush. I'm not a communist or a socialist, nor are most Canadians.

If we support social programs, we're dismissed as left-wing fringe groups, and yet the success of the Reform movement was due in a large part by their embracing right-wing fringe groups. The Alliance for the Preservation of English, the Northern Foundation, C-Far, the National Firearms Associations, the pro-white South Africa crowd, and of course the Religious Right. (6 and 7)

All brought something necessary for the success of this movement: passion based on dogma. And while Leo Strauss, the father of neoconservatism, promotes the exploitation of religious fervour, not all dogma is religious.

Judy Johnson, professor of psychology at Mount Royal University in Calgary, wrote a piece for the Edmonton Journal recently: Much to gain from tempering dogmatism's bark. She says 'There's a lot wrong with being absolutely right,' especially in politics.

Zealous political ideologues, religious fundamentalists who would merge the secular with the sacred, and bigots who vent their views on talk shows and the Internet all undermine social stability. There is, however, a greater, unspoken peril. Altering the best intentions of politics, science, economics and religion, it endangers the course of history, yet seldom makes media headlines, not even during political elections, when we should be most vigilant of its presence. Perhaps that's because up until 2009, no social scientist had developed a comprehensive theory of its nature and manifestations. (8)

Dogma does not have to be based on ancient religious texts. It can also include the views of free marketeers, libertarians, pro-lifers, et al. All those who lack the ability to see the grey. There is no in between.

Former Harper insider, Tom Flanagan, in his book Waiting for the Wave, describes Stephen Harper as an ideologue. His ideology is based on a fear of socialism and communism, and the passion for top down commercialism (9), where the corporate sector calls the shots.

And of course the social conservatives, who Harper admits make up the largest part of his base, view the world through the belief in the infallibility of the Bible, especially the Old Testament. This is especially evident with people like Jason Kenney, Stockwell Day and Maurice Vellacott, though they are certainly not alone.

It's why they don't allow fact to cloud their issues, and as Johnson reminds us, this is dangerous.

But what's even more dangerous is the policy of Obscurantism, that not only rejects facts, but distorts them, using rhetoric and slick "words that work". What Lawrence Martin once called "a bumper sticker mentality".

In a lecture at the University of Toronto in 1998, Michael Ignatieff stated of neoconservatism: "Nothing has done the electoral and moral credibility of liberalism more harm than the failure to take this attack seriously" (10)

And as Judy Johnson reminds us, we must be more vigilant. We need to get our heads out the sand, and stop being so skiddish about discussing the destructive Religious Right. It does not make us anti-Christian, only pro-Canadian. And we have to recognize that neoconservatism is fascism, and if we want an understanding of how it works in a modern context, read anything you can find on pre-war, pre-Holocaust, Nazism. It's familiarity is uncanny.

*Social Credit formed the basis of the Reform Party ... Preston Manning being the son of Social Credit premier Ernest Manning. According to Janine Stingle they were the only party [SC] based on the notion of a Jewish conspiracy. (4)

In 1962, Social Credit entered into a coalition with the Quebec nationalist party, the Ralliement des créditistes, led by David Réal Caouette. "In the 1962 federal election, Caouette linked his Ralliement des Creditistes with the national Social Credit party and, by invoking Social Credit's traditional bogeys of an anti-Christian conspiracy and the plot of the "moneyed interests," helped twenty-six Quebec Social Credit MPs (out of a national total of thirty) get elected." [only four from outside Quebec](4)

In an interview with MacLeans magazine, Caouette was quoted as saying:

"Who are your political heroes in history?" he was asked. Caouette's brisk rejoinder: "Mussolini and Hitler." The storm broke, and it wasn't helped any by what Caouette had gone on to say in the magazine: "I admire Mussolini's qualities as a leader and I regret that he was a fascist. I admire in Hitler his economic reforms and I consider that he brought his people out of misery. I regret that he employed for war instead of for peace the ideas which he had." (5)

To his surprise, Dr. Hjalmar Schacht sent him a letter lauding his brave remarks.

"I am very pleased to read in our press about your courageous statements and laudable opinion about the ideas of Adolf Hitler. I was happy to have served under his leadership in one of the key positions in our economy before the war and owing to that I had an opportunity to become acquainted with his greatness." (4)

Schacht did not see Hitler as anti-semitic despite the Holocaust, only as a free market economist, who allowed Capitalism free rein.

The Politics of Obscurantism: Then You Control the Press

The Politics of Obscurantism: Anti-Intellectualism

8. Much to gain from tempering dogmatism's bark: 'There's a lot wrong with being absolutely right,' especially in politics, By Judy Johnson, Edmonton Journal, September 23, 2010