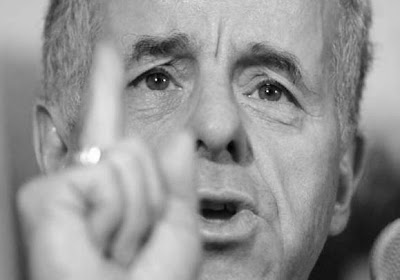 A vote of non-confidence on November 28, 2005, resulted in the fall of Paul Martin's government and the beginning of an election campaign. At the time the Liberals were running about 10 points ahead of Harper's Conservative-Alliance coalition.

On the same day, NDP finance critic, Judy Wasylycia-Leis, sent a letter to the RCMP requesting an investigation into allegations that some people had made stock market gains through advance knowledge of the federal government's decision not to tax income trusts. "The media has reported a sharp and unusual increase of trading in income trust investments in the hours immediately preceding the Finance Minister's [Ralph Goodale] announcement. There has been speculation in the press that a leak about the government's decision could be responsible."(1)

What happened next continues to remain a mystery, but what is clear is that members of the RCMP were involved in election tampering, that went straight to their former boss, Giuliano Zaccardelli.

Zaccardelli responded to the NDP MP's inquiry, suggesting that they had already started an investigation. But her offices were closed for the holidays so he took the unprecedented step of calling her personally to make sure that she read the letter. Wasylycia-Leis not only posted it on her website, but also called a press conference to announce that the Liberals were the subject of an RCMP investigation. This caused an immediate drop in Liberal popularity (2), a surge in Conservative momentum, and was instrumental in Harper becoming prime minister.

And to make matters worse, the RCMP actually mentioned Liberal Finance Minister Ralph Goodale by name, a man with a squeaky clean reputation, and though he was cleared of any wrong doing, that cloud continues to hang over his head, as evidenced by comments posted now and then by Harper supporters.

So Why Did Giuliano Zaccardelli Do It?

Lawrence Martin believes that the RCMP chief had an axe to grind with Paul Martin.

The Mountie intrusion into the election campaign led to accusations that the force was biased against the Martin Liberals. This was a telling piece of irony for the Conservatives, who had long suspected the Mounties of being too close to Jean Chretien. During the uproar over alleged conflicts of interest in the Shawinigate controversy, Conservatives had howled in protest at how the Mounties appeared to be backing Chretien at every turn.

Giuliano Zaccardelli, then the RCMP commissioner, enjoyed a close working relationship with Chretien. One time at an American embassy reception he told a journalist just how that relationship had benefited him. He described how he was now a celebrated figure in his Italian home town because of his status as commissioner. What had helped him succeed, he explained, was that he had backed the right Liberal horse. His fellow Italian, Liberal MP Maurizio Bevilacqua, didn't enjoy the same status in his home country, Zaccardelli said, because he had sided with the wrong guy—Paul Martin. (3)

Paul Martin recognized the animosity but believed that it was because Zaccardelli was upset when he called an inquiry into the Arar affair that put him him right in the thick of it. He describes the events:

The decisive moment in the campaign came three days after Christmas. I was in a hotel room in Halifax when Alex Himelfarb reached me by phone with the news. I realized the significance right away. What had happened was unbelievable and built on a falsehood, as subsequent events have proven. It was nonetheless devastating.

Guiliano Zaccardelli, the then still-respected commissioner of the RCMP, had written a letter before Christmas to the NDP'S finance critic, Judy Wasylycia-Leis, saying that the RCMP had launched a criminal investigation into the possible leak of a planned change on the taxation of income trusts announced by Ralph Goodale the previous month.

There is no doubt in my mind that what Zaccardelli did was improper. The only question there can be about the incident is whether it was an act of ineptitude or of malice aforethought. My own view is that no one can be that inept ... Was it my decision to call the Arar inquiry? (4)

He also hints that the Conservatives may have been involved, which gains credibility given the actions of the Harper government when they came to power. Maybe they just owed Zaccardelli a debt, but they went well beyond simple gratitude, raising even more questions about the entire affair.

Following the election, there was no immediate call for an inquiry. For the defeated Liberals to have demanded one would have appeared self-serving. The NDP had played the role of willing enabler for the RCMP plan, so it was not keen to demand accountability. And Prime Minister Stephen Harper, unlike Paul Martin and his zeal to appoint Judge Gomery to uncover his own party's scandal, had no interest in investigating a scandal that had helped the Conservatives win.

On September 18, 2oo6, the inquiry Paul Martin had launched into the illegal rendition of Maher Arar to Syria by U.S. authorities, headed by Mr. Justice Dennis O'Connor, reported its findings. Maher Arar was completely exonerated, but the O'Connor Commission found that the RCMP had passed incorrect information about Arar to the Americans. It found that Commissioner Zaccardelli had misinformed the solicitor general both about the likelihood that Arar was tortured, as well as darkly hinting that Arar had real terrorist links. Heads should have rolled, but Commissioner Zaccardelli kept his and he was not asked to submit his resignation when the report was issued. (1)

Instead the Harper government built a wall around the commissioner, and went to extraordinary lengths to protect him.

Within days, there were allegations that the Prime Minister's Office and the office of Minister of Public Safety Stockwell Day had ordered the commissioner not to appear before the Commons Public Safety and National Security Committee. In the House of Commons on September 24, 2006, interim Leader of the Opposition Bill Graham repeated former RCMP Commissioner Norman Inkster's claim that Zaccardelli was being muzzled by the Harper government. It was a subject of much media speculation when Zaccardelli refused to appear before the House Committee. A confidante of Zaccardelli approached the media to assert that Stockwell Day had written Zaccardelli to instruct him to avoid the House Committee. (1)

When it was later determined that he had lied under oath he was forced to resign but never really punished. (5) And even after that his name came up once more in a criminal investigation over the misuse of pension funds. And again the Harper government stepped in:

The next troubling scandal was over the misuse of RCMP pension funds. A month before Commissioner Zaccardelli resigned, an RCMP whistle-blower, Staff Sergeant Ron Lewis, sent a package to every member of the Public Accounts Committee of the House of Commons. The package documented allegations of RCMP senior officers misusing RCMP pension funds. (1)

And when a House Committee was formed to look into the matter:

In a column Don Martin wrote:

It's incredible and inexplicable why a government under Prime Minister Stephen Harper, which wraps itself in the uniform of aggressive law and order, would vote repeatedly to deny RCMP officers access to the spot-light when they were willing to risk their careers telling a disquieting truth . . . there's no sensible explanation for why Conservatives, who usually act in unison in committees, would circle the wagons against RCMP insiders seeking to blow the whistle ... (6)

This was a very serious situation. We have our national police force getting involved in an election campaign, essentially winning it for the Conservatives. And we have those same Conservatives breaking every rule in the book to make sure that the head of that police force does not have to answer to serious allegations against him in both a torture case and the possible misappropriation of funds. (7) Things like this happen in third world dictatorships, not western democracies.

And where is Giuliano Zaccardelli now? Someone obviously pulled some strings because he is now a senior official with Interpol in Lyons, France, heading its “OASIS Africa” program which aims to help African police forces more effectively combat international crime.(8) Unbelievable.