RCMP: The Illegitimacy of Democracy and the Erosion of Public Trust 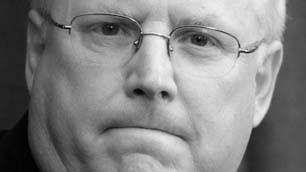 "Whenever justice is uncertain and police spying and terror are at work, human beings fall into isolation, which, of course, is the aim and purpose of the dictator state." Carl Jung

When William Elliot was named as new RCMP Commissioner in July of 2007, it raised more than a few eyebrows. (1)

And it was not simply for the fact that he was a career bureaucrat, with no police experience, but because he was a Conservative insider, an old crony from Brian Mulroney's days. In fact his brother Richard was married to Brian Mulroney's sister. It's hard to get anymore inside than that.

He was around during the days of the Giga Text scandal, that helped to bring down the Saskatchewan government, something I've written about before. Stevie Cameron, in her book On the Take: Crime, Corruption and Greed in the Mulroney Years, identifies Elliot's position and also reports on a real estate deal that she included as part of that scandal.

It was at this point that Montpetit and GigaText entered into an interesting real estate deal. Bill Elliott, the Regina lawyer, was a senior partner at McPherson Elliott and Tyreman, a leading law firm in the city. The firm's offices occupied a two-storey building in a suburb. The wealthy Hill family wanted to build an office tower in downtown Regina and went to Elliott for a large loan because he was chairman of the provincially run Saskatchewan Pension Funds. Elliott helped them win approval for the loan, and as soon as the tower was up, Elliott's law firm leased two floors. Sixty per cent of the building was rented to the provincial government for offices. Then the law firm sold its old two-storey building to the Hill family for $1.75 million, an excellent price for the firm. The Hill family needed tenants for the old building, too, and fortunately GigaText appeared just in time to fill the space. The lease arrangement made everyone happy. (2)

Nothing illegal, but the optics were damaging none the less, and lent itself to an overall distrust.

Stephen Harper appointed him "to clean up the RCMP", after the damaging tenure of Giuliano Zaccardelli, who not only tampered with the 2006 election, but was also named in pension fraud allegations. The Harper government went well beyond the limits of their powers, to protect Zaccardelli, the man who had handed them their election victory.

But it soon became clear that Elliot was not appointed to "clean up" anything. He was there to go after those who blew the whistle, and what he created was chaos. As James Travers reports:

Controversial when announced in 2007, Harper’s choice of a bureaucrat with no policing experience and a Tory background is now an embarrassment with implications stretching beyond Canada. Elliott’s dictatorial management style and the resulting mutiny are focusing unwanted domestic and international attention on the shaky leadership of this country’s security services. (3)

And what was also clear, was that Stephen Harper was politicizing the RCMP and bringing them under his control. A dangerous act in a democracy, as a letter by David Hutton of Ottawa suggests:

Only tinpot Third World countries — and Canada — have their national police force reporting directly to the government of the day. ... Most developed countries ensure that the police have an arms-length relationship with politicians, in order to uphold the law impartially, without political interference or favour. Yet our Mounties report to a minister and brief him regularly on what they are doing — just as if the RCMP were a government department. No doubt the Mounties also receive regular guidance on their priorities — just like a government department does. (4)

And the RCMP has become a political nightmare, as Elliot played the role of a partisan politician, and not as an officer of what should have remained an arms length agency.

There is a shakeup at the top of the RCMP as senior officers who complained about Commissioner William Elliott's style last summer are quitting or being forced out, CBC News has learned. Deputy commissioner Raf Souccar has been asked to leave the force, with trust cited as the reason. And deputy commissioner Tim Killam has given notice that he will retire in December.

Assistant commissioner Mike McDonell, who left the RCMP in August, wrote to Public Safety Minister Vic Toews last week, saying those who came forward last summer "have simply become sacrificial lambs." Senior RCMP officers complained about Elliott to some of the highest levels of the federal government on two occasions in July. They accused Elliott, who became the first civilian to head the Mounties in July 2007, of being verbally abusive, closed-minded, arrogant and insulting. (5)

Which brings us to why Elliot showed up at the G-20. Was it he who instructed the troops to make security a secondary consideration? Were they told that their primary job was to stifle dissent? To attack peaceful protesters?

After all, he works for Stephen Harper, and learned how to play the game as a Mulroney crony.

A senior Mountie commander told the federal government that RCMP Commissioner William Elliott “disrupted” the federal government’s billion-dollar security operation for the G8 and G20 summits – simply by showing up for the events. “Despite being advised not to attend the summit command centres on June 25, 2010, the commissioner chose to attend, and in doing so, completely disrupted operations,” Mike McDonell, then an RCMP assistant commissioner, wrote in a letter to Public Safety Minister Vic Toews. (6) 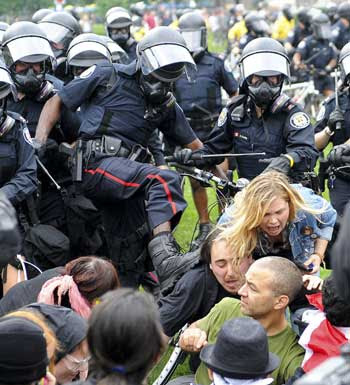 "There are only two choices: A police state in which all dissent is suppressed or rigidly controlled; or a society where law is responsive to human needs." William Orville Douglas