Neoconservatism has a Destructive god and is a Religion of Greed 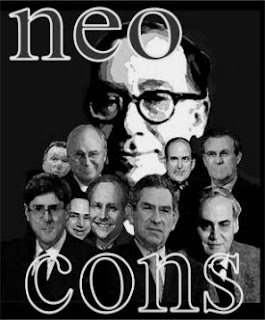 "We must not undervalue our God-given blessings as a nation to such an extent that we let them be taken from us as we sleep." Maj. Gen. Lewis MacKenzie

I've written a fair bit on Leo Strauss, the father of Neoconservatism, whose doctrine has given Canada politicians like Grant Devine in Saskatchewan, Ralph Klein in Alberta, Mike Harris in Ontario and of course our current federal government under Stephen Harper.

However, the neoconservatism defined by Strauss, was not really an economic theory. It was a blueprint for achieving and holding onto power.

Rick Salutin, just before being fired by the Globe, wrote a column: Stephen Harper – the last Straussian? In it he outlines the key ingredients to Strauss's Neocon stew: Secretiveness, Religion, Nationalism, Populism and Contempt.

But what of the economic theories of neoconservatism?

Their conventional wisdom is that if corporations are allowed free rein, with no obligations to workers or community, everyone will win. And even before George Bush proved this to be nonsense, after destroying both the economy and the soul of America, other neoconservative experiments had failed miserably. Margaret Thatcher, Ronald Reagan and Roger Douglas, neocons all, were train wrecks for the countries they governed. And yet Stephen Harper follows their theories like a religion.

Canadian journalist Madeliene Drohan suggested that neoconservatism "allowed the select few to enrich themselves at the expense of many." (1) Very astute.

Dalton Camp, former president of the federal progressive Conservatives, sounded the alarm a decade and a half ago. When answering the question of what neoconservativism looked like, he said "it looked like Hell, " and he meant that literally. A little piece of Hades here on earth, with the greedy wielding the pitchforks.

It has become clear that multinational corporatism and new patterns of cartelization have forever altered the longstanding relationships between business and society, between employer and employee, and between the nation state and the outside world. The result has been what we see around us: structural employment, falling incomes, a vanishing middle class, all in a climate of fear, anger, and disillusion. (2)

And Scott Reid sees a dramatic decrease in the fortunes of the middle class, that have been accelerated with our own federal neoconservative* experiment.

According to research from the Gandalf Group, 50 per cent of Canadians say their financial situation has deteriorated in the past year and one in five Canadians believe it will worsen further. Just this week, Angus Reid reported that household debt ranks as the primary anxiety on the minds of most middle-class Canadians. Fully 43 per cent of the country says their personal finances are in either poor or very poor shape. Unfortunately, people’s impressions are justified. Economists tell us that household debt in Canada has never stood at higher levels. Not in the recession of the early 1990s or the early 1980s. Not even during the Great Depression. Overdrawn lines of credit.

Maxed out charge cards. Borrowing against declining home equity. These are the financial facts of life for most working families. In short, middle-class Canada is struggling to keep its head above water. And it sees waves headed its way. (3)

And part of this problem was Harper and Flaherty mistakenly suggesting that Canada would not feel the pains of other countries because of their great handling of the economy. It was all smoke and mirrors, so now not only have Canadians maxed themselves out buying homes they couldn't afford and spending money they didn't have, but we are still stuck with the rotten paper bought up on our behalf.

The writing was on the wall for Canada when the Reform Party first reared it's ugly head, and though Stephen Harper has been credited with writing their policy, then president of the National Citizens Coalition, claimed that 2/3 of it was cribbed from the NCC handbook. (4)

Plagiarized from the playbook for the revolt of the rich.

Nietzsche put it perfectly, in The Will to Power: "The great majority of men have no right to existence, but are a misfortune to higher men." This is a codicil for the comfortable, the affluent, and the obscenely rich in our time, as it was the inspiration for fascism earlier in our century.

The new order is not without its coterie of apologists and intellectual dandies. Indeed, it even has a political party of its own, called—irony of ironies—the "Reform" Party. Their models and values, as their political heroes, are American—the latter including such established mountebanks as Newt Gingrich, Al D'Amato, and Jesse Helms, and the ubiquitous pair of shabby parsons on the Christian right.

Among these trend-setting followers of the new conservatism, American style, are rising hosts of Canadian imitators and cross-breeders, fervently devoted to the reduction of government and the elevation of the oligarchy.

It seems to me a mistake to call neo-conservatism anything other than the enemy of the society those of my generation built over the years since the war. The differences are irreconcilable; there is no common ground. As a Tory Canadian, neo-conservatism is as alien to me as is Marxism or fascism or dadaism. It rejects the idea of Canada and the ideals that have, for so long, been the inspiration for the kind of society that has become a political wonder of the world.

Peter Lougheed, for many years the all-conservative quarterback in our nation's politics, has warned the Tory party not to set its face against the poor. He has also expressed his unease with the increased "Americanization" of our country.

For some time, while writing the columns in this book, I seemed to be alone in my concerns. This is no longer true. The general and the former Alberta premier may not agree with any of my views, but they share my concerns. They would, I am sure, put things differently; how differently, I cannot know. (2)

There are many of us who now feel like we're alone in our concerns. We know that neoconservatism is destroying our country and we also know that this is not what democracy looks like.

Initially the attack was on the poor, and the religious right was exploited to tell them that their poverty was their own fault. The devout were advised that these "enemies" were poor because God wanted them to be poor. This was Leo Strauss's instructions on how to control the ignorant masses.

But with Harper's agenda in full throttle, it is no longer just the poor who are suffering. The middle class, representing the majority of the population, is in serious trouble.

And yet what does Harper's ideology tell him to do? Provide even more tax cuts to corporations, buy fighter jets and make the supplier's lobbyist his chief of staff to make sure that he money gets into the right pockets, while snubbing his nose at a report with recommendations on helping the disadvantaged.

But not to worry. Neocon senator Hugh Segal advised the Harper government to "temper their message of austerity with compassion." (5)

We're about to be screwed, but they'll be gentle.

*In many ways I thought that Paul Martin was a neocon, which is why I never voted for him. However, he still felt a moral commitment to assist the most disadvantaged Canadians. Harper not so much.

3. Financially, middle-class Canada is awash in a world of hurt, By Scott Reid, Globe and Mail, September 29, 2010