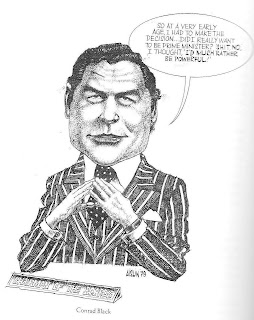 There is in this country a mistaken belief that the Liberals were the first to attempt to turn Canada into a Corpocracy.

And that notion has been ingrained into our psyche.

But it is wrong. In fact it was Brian Mulroney who first moved the corporate boardrooms into the Parliament Buildings, and gave Lobbyists more power than our elected officials. It was also Mulroney who created the infrastructure for the sponsorship scandal.

Another new development in that fall of 1984 was the emergence of powerful lobbyists. Until the Mulroney government came to office, lobbying
was a discreet profession in the city, practised by a few well-connected Ottawa hands ....

When Mulroney came to Ottawa, he was followed by a flock of cronies who were brazen in their determination to cash in on the friendship. They opened "consulting" or "government relations" offices, bragged openly about their access to the Boss, and devised billing systems based on retainers and — a new wrinkle — contingency fees, or percentages of the action should their efforts be successful. Some, the minnows in the Ottawa pond, opened modest one-man bucket shops in shabby office buildings; others, the barracudas, confident of raking in significant revenues, leased suites in the most expensive towers in Ottawa and filled them with teak tables, leather chairs, expensive art, and eager-beaver support staff. (1)

Mike Harris would adopt the same system with lobbyists like Guy Giorno, Tom Long and Leslie Noble. And of course, anything Mike Harris did, Stephen Harper does better.

Conrad Black and Brian Mulroney had been friends for a number of years. Mulroney was president of the Canadian Iron and Ore Company, when the Black family were major shareholders, and he was the one who first introduced Black to Power Corporation's Paul Desmarais. (2)

Mulroney once said of Black: "Conrad has a magnificent capacity for conceptualization. If I look out a window, I'll see a tree. He might see a paper mill. He can put together the pieces of any corporate puzzle." (3)

But when Mulroney was asked to mediate a deal with Hanna Mining, he warned Black that he was seen as a "paper purchaser, not a builder or job creator". (4)

Robert Anderson the president of Hanna Mining, who wanted to stop Black from taking over Hanna, was Mulroney's boss. Brian Mulroney was, by his own description, "the jam in the sandwich.' Mulroney's position was made even more delicate as the battle moved out of the boardrooms into the courts. (5)

Black rewarded Mulroney, by backing him during his failed 1976 leadership bid, and the Mulroneys remained members of Black's social circle. That circle also included Murray and Barbara Frum(6), parents of David Frum, who remains a Black supporter.

Peter White was a classmate of Brian Mulroney's at Laval (7), and in 1972, he was running a small newspaper in Quebec's Eastern Townships along with his partner, Conrad Black. White introduced Black to Mulroney soon after he began to get involved in politics. (8)

White worked on Mulroney's leadership campaign, drawing in an important element of support, the Tory Youth, especially a group of neoconservative youth from the University of Toronto, led by Anthony Panayi (Tony Clement):

The campus radicals were also instrumental in the defeat of federal Conservative leader Joe Clark by corporate lawyer Brian Mulroney. "In 1981 to '83 there was a guerrilla campaign against the leadership of Joe Clark orchestrated by Brian Mulroney and the people who backed Mulroney ... In Ontario, the PC campus and youth associations were all hotbeds of anti-Clark activity and we were all on the anti-Clark side." The success of the right young Tories in helping force a leadership convention and in electing Mulroney over Clark strengthened their confidence. (9)

And the Young Tories were smitten with Peter White:

Peter White had identified young Tories as strategically significant and concluded that Mulroney had to win them in order to succeed. While staying discreetly out of the campaign limelight, White started to forge relationships with youth leaders, who were impressed that someone of White's stature — a business associate of Conrad Black — was interested them. Clark, meanwhile, had nobody of comparable business lining up youth support. Nearly one-third of all delegates were youth, so the potential was enormous. (10)

White would leave Mulroney in disgust, and return to work with Conrad Black, and the relationship between Black and Mulroney would also turn sour. In 1982 when Black was under investigation in Cleveland for shady dealings, be blamed in part, his former friend:

Unlike in America, Black personally knew those involved in the investigations in Toronto, and understood the regulators' frailties. `I'll talk to the Attorney General,' he announced. Just hours after the dinner he was sitting in the office of Roy McMurtry, Ontario's Attorney General. The politician met Black without any officials, even those directing the investigation. In his quiet, mellifluous manner, Black cast blame on a range of people, including even the future Prime Minister Brian Mulroney, at that time a rising politician in Ottawa and a director of Hanna. 'The powder trail from this trumped-up charade of an investigation leads straight to Brian's door,' Black told the Attorney General. 'He was far enough along in the chain that generated the Norcen investigation that his fingerprints wouldn't be on the knife. (11)

And Mulroney would say of Black: "Conrad's problem, is that he's never had his arse sucked by a woman." (12)

Mulroney always did have a way with words.