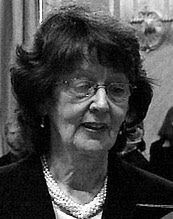 According to her bio, the 70-year-old Marjory LeBreton has worked for four leaders of the now defunct, Progressive Conservative Party of Canada - John Diefenbaker, Robert Stanfield, Joe Clark and Brian Mulroney.

That's true, though she should mention that she never liked Joe Clark, and liked his wife even less (2), but I suppose that's water under the bridge.

She was appointed senator by Brian Mulroney in 1993, but before that she was responsible for many patronage appointments, especially to the senate. This job was formerly handled by Peter White, who went back to work for Conrad Black.

Marjory LeBreton took over the unofficial patronage portfolio after Peter White's departure:Leading up to the leadership, people used to say, in the party, "You know, Brian Mulroney would be a great leader, but boy, I am worried about his friends." You would hear that, and I used to say, "Don't be so silly, everybody has liabilities Joe Clark has got a fair sprinkling of them, I don't mind telling you.

LeBreton dealt with dozens of demands and requests, particularly when Senate seats became available. Seven prominent Tories explicitly asked for appointments: I had John Reynolds on the phone lobbying for a Senate seat for himself, and giving me this pitch that it should be someone that could go on the talk shows. I said, "Gee, John, I haven't noticed you being out there."

Gerry St. Germain wrote a letter to the prime minister talking about the sacrifices he's made. I actually felt sorry when I read it. It said something to the effect that he would want to serve in the Senate and then he ended the letter by saying, "If you decide to choose someone else, please know that you will have my absolute loyalty." Jim Doak, who was seventy-four, was actually going to sign a letter saying that he would only stay there for a year, just to be called a senator. Doak was originally the president of the party in Manitoba under Diefenbaker.

Duncan Jessiman was another of the old party bagmen stalwarts, but he had supported the prime minister financially when he ran for leadership. He was seventy years old, and he sent the Prime Minister a kind of "you owe me" letter, and you know the prime minister people have helped him out. He [didn't make him a senator but] put Dunc in the best appointment he could give at the time, which was on the board of Air Canada, and of course we privatized Air Canada and they didn't keep him on the board, but they gave him a lifetime pass.

We had Kate Schellenberg [later Kate Manvell] in BC. She was married to Ted Schellenberg, who was the MP from Nanaimo. She wrote a long letter to the prime minister just before Christmas. As the prime minister was reading it, he said, "There must be some reason she's writing." The last paragraph was, "I'd like to be named to that vacant Senate seat from BC." We made her a citizenship court judge. Pat Carney asked for the Senate seat too, but claims she didn't. (3)

LeBreton is now Leader of the Government in the Canadian Senate, an appointment given her by Stephen Harper as payment for help with his 2006 campaign. I wonder how many letters and requests she fielded for Harper's patronage senate appointments. 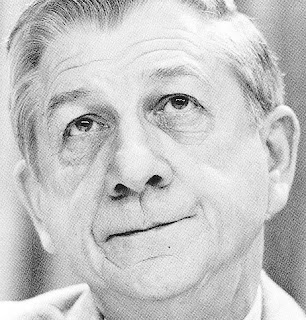 Erik Nielsen*, shown to the right, was the first Deputy Prime Minister under Mulroney, who eventually quit because of the rampant corruption in the Party.

Not that he was immune to making patronage appointments, and in fact developed a system where all party faithfuls had a say:

The way Nielsen envisaged it, the first stream would fill the top jobs at Crown corporations such as Air Canada, Export Development Corporation, the Atomic Energy Control Board and the CBC, as well as slots in bodies like the Parole Board and the Immigration Appeal Board, which required members with genuine expertise.

The party faithful who had raised money and volunteers in campaigns across the country would constitute the second stream, a pool from which candidates would be drawn to fill positions in arts agencies, marketing boards, and citizenship courts. Nielsen expected Tories to be appointed to the major boards as well, but he believed the chairmanships and presidencies should be set aside for people who had more than political credentials. There was a distinction, he insisted, between what was pure patronage and what had to be a selection of highly qualified persons to run government enterprises. (4)

With 3,000 patronage appointments to fill, Nielson established provincial advisory committees, who would bring forward likely candidates for various jobs, and these recommendations then went to a national advisory committee. He had patronage down to a science, but it soon became clear that the final decisions were in the hands of only one person, who more often than not completely disregarded any suggestions by the provincial groups.

Loaded as they were with old Mulroney associates, the provincial committees were being ignored and their recommendation, bypassed within three months of their inauguration. The national committee? It was a joke, "a mere facade," snorts Nielsen ... So I stopped chairing. I just simply stopped going to the meetings. My presence there was totally ineffective and superfluous." The committee's executive committee faded away and the process was taken over by Marjory LeBreton. (4)

A Champagne Taste on a Beer Income

The Mulroneys led an extravagant lifestyle, mostly on what would appear to be tax dollars and influence pedaling:

"He always lived up to the hilt" said one of his oldest friends. Like Mila, Mulroney enjoyed living and working in luxurious surroundings decorated with fine furniture and good paintings ... And he too liked expensive clothes. In the mid-1980s he would buy several $2,000 suits at one time from Bijan in Manhattan, one of the most expensive stores in New York, and of course he has long indulged a weakness for Gucci loafers at about $500 a pair.

One individual who has known Mulroney well since his days at Iron Ore is Conrad Black. In his 1993 autobiography 'A Life in Progress', Black patronizingly described the Mulroney he knew in the 1970s. Even though Mulroney had become successful wrote Black with the confidence of someone to the manner born, "he still felt himself quite keenly to be the underprivileged lad from Baie-Comeau, son of the foreman in the Chicago Tribune's news print mill who identified more with the French than the English,and more with the lower economic echelons than than with the scions of wealthy Westmount . . . He had the attitude to money of someone who didn't have any himself but had seen other scatter lavishly - he appreciated it more in the spending than in the accumulation, the latter a process he tended to oversimplify. And politically he had the attitude to money of someone who came to maturity in last years of Duplessis when the tangible fruits of a long incumbency were being extravagantly dispersed. He had the heart of a working man but the tastes of the rich." (5)

What my mom would call having a champagne taste on a beer income.

Before leaving public office, Brian Mulroney had got himself into a financial mess and was indebted to the Progressive Conservative party to the tune of more than $ 200,000.00 Many of these expenditures had been approved by Marjory LeBreton.

To raise needed funds he tried to sell some of his personal furnishings that were then at 24 Sussex Drive, at inflated prices to the Government of Canada. However, the media got wind of it and the deal was off. So he instead he got himself involved with Karlheinz Schrieber.

And LeBreton has done very well for herself, without apparently no post-secondary education, but referred to as "one of the hard-ass operatives" (6), a left over of the Mulroney years.