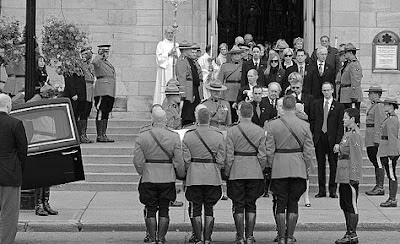 On March 5, 2001, RCMP Constable, Jurgen Seewald, 47, was killed with one blast from a shotgun, while responding to a domestic dispute in Cape Dorset, Nunavut. The 26-year veteran of the force had only moved to the northern community a few months earlier. (1)

On December 21, 2001, RCMP Constable Dennis Strongquill, 52, and his partner stop a truck near Russell, Manitoba, intending to cite the driver for failing to dim his high beams. A passenger gets out of the truck and starts shooting. The two officers jump back in their RCMP SUV and start driving toward a nearby RCMP detachment. In the parking lot, the pursuing truck smashes the police SUV into a fence, trapping Strongquill inside. A passenger of the truck gets out and fires a shotgun at Strongquill, fatally wounding him before fleeing the scene. (2)

On February 28, 2004, Martin Ostopovich, after a four-hour standoff with the police, got into his truck with two hunting rifles. Two constables used their cruiser to plow into the truck as a tactical move. When Corporal James Galloway then got out of his vehicle, Ostopovich fired his rifle, killing the officer. (3)

On March 3, 2005, four RCMP officers are ambushed and shot to death on a farm near Rochfort Bridge, Alta. They were investigating reports of stolen auto parts as well as a small marijuana grow operation. They were shot by a man armed with with a high-powered rifle. The suspect, identified as 46-year-old Jim Roszko, also shot himself. (4)

On July 7, 2006, two RCMP officers answered a domestic abuse call in Mildred Saskatchewan. The suspect ran out of the house and fled in a pick-up truck, causing the officers to follow. Another RCMP cruiser joined in the chase, when the driver of the truck, began firing a rifle at his pursuers. Const. Robin Cameron, 29, and Const. Marc Bourdages, 26, were both hit and died later in hospital. (5)

Just before midnight, on November 5, 2007; 20-year-old RCMP constable, Douglas Scott, responded to a domestic dispute in the tiny hamlet of Kimmirut, Nunavut. Reports of a drunken man, Pingoatuk Kolola, who had threatened his girlfriend and was now driving around recklessly, caused the officer to proceed with caution. He became even more cautious, when he realized that the man was holding a baby. Koloa, "with a child in one arm and a .30-06-calibre hunting rifle in the other", fired into the passenger window of Scott's vehicle, the fatal bullet going through his head. He died instantly. (6)

So when the RCMP and other police organizations tell me that the gun registry is an important tool, I listen.

With Parliament set to vote on the fate of the long gun registry next month, the RCMP report argues that the “full registry” be maintained, calling it a valuable tool that has helped reduce gun deaths nationwide. “A high level of compliance of the long gun registry is necessary to provide the enhanced value to investigators utilizing the firearms registry. It is important for officer and public safety and is a legislated requirement for all firearm owners,” the report notes.

... And the RCMP report notes that the majority of firearms are long guns and the “majority of firearm deaths in Canada are caused by long guns.” [my emphasis] It also notes that over the last decade, long guns were used to kill ten out of thirteen police officers. “Without registration there is a failure of accountability on behalf of the owner, and it is registration that drives accountability. Without registration, anyone can buy and sell firearms privately and there would be no record". (7)

And when Garry Breitkreuz complains that the police oppose an armed populace, I dismiss his insanity.

Why are the police chiefs so strident in their quest to keep the registry in place? They won’t admit it, but it appears they don’t want Canadians to own guns. To that end, they need a database that will help them locate and seize those firearms as soon as a licence or registration expires. (8)

And when the police tell us that meddling by the Harper government hinders their ability to promote gun safety, I agree.

The Conservative government's decision to introduce amnesty provisions for long-gun owners has "contributed to confusion" over firearms control in Canada, says an internal RCMP evaluation that strongly backs universal registration. Employees of Canada's firearms program told evaluators that licensing compliance "has been affected by political messages," says the report, officially released Tuesday by the Mounties after being leaked Monday.

At the same time, those running the program said they had trouble getting out their message: That firearms regulation makes society safer. They complained about having to jump through government hoops to get signoff on communication notices, a general lack of public outreach, and widespread misperceptions about the firearms program. (9)

I outlined a history of gun control in Canada recently, to show that it is not a Liberal gun registry, but a Canadian gun registry, that evolved as both Conservative and Liberal governments responded to the wishes of Canadians. Now our first Reform government, is threatening to undo more than a century of progress.

And Jack Layton seems determined to help them. 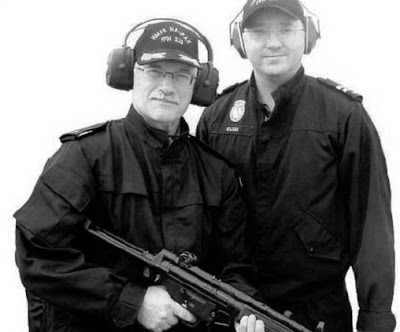 C'mon Jack. Do the right thing. Be the man I thought you were. Do you really want this to be your legacy?

1. Officer's widow weeps as Jaw gets life: "A very difficult time for the community, the family and the police officers", By Greg Younger-Lewis, Nunatsiag News, February 20, 2004

5. Curtis Dagenais guilty on all charges: Dagenais to be sentenced Friday morning, By Betty Ann Adam, The Star Phoenix, March 12, 2009