A Deceptive Democracy: The Annihilation of Stéphane Dion and the Media's Complicity 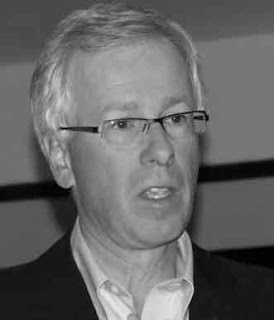 "For the first time in Canadian political life, attack ads have been launched outside an election cycle. The Conservative "Not a Leader" tag line for Stephane Dion was drummed into voters' heads in January 2007 — mere weeks after Stephane Dion won the Liberal leadership. The increasing prominence of a presidential-style prime minister is steadily denigrating the traditions and institutions of Canadian democracy." - Elizabeth May (1)

From television ads to tax payer funded ten percenters, the Reform-Conservatives hammered the message that Stephane Dion was not a leader, based on nothing more than a fabricated perception of weakness.

And when that wasn't enough, they resorted to lies. The MP from Blackstrap Saskatchewan, Lynne Yelich, used her taxpayer funded handouts to suggest that Mr. Dion was going to end the Universal childcare benefit, when he had never said such a thing. He was only promoting a national child care plan, instead of throwing crumbs at a problem. But that never factored into Yelich's attack. Fear mongering was her only goal.

They also used a soundbite from the leadership convention, when Dion asked Michael Ignatieff "Do you think it's easy to make priorities?", when in fact the translation would have been to "keep". And besides, if we were going to use comments made at leadership conventions or during leadership races, the Conservatives, when they were Reform and then Alliance, were ruthless. You could write a book.

And if the push-poll handouts, TV ads and fabrications weren't enough, they even resorted to spying, using our employee James Murray to run covert operations.

But the worst was yet to come.

First off, there should not have been an election at all. Not only did Stephen Harper break his own law to call a snap election, but there was a criminal investigation underway against his party for the "In and Out" election scheme. An investigation in which he was doing everything in his power to squash.

According to Dr. Joan Russow of the Global Compliance Research Project:

There should never have been an election in Canada. The Governor General should have refused to accept the Right Honourable Steven Harper’s request for an election when there was an outstanding investigation into the fraudulent practices of the Conservative Party during the 2006 election. The investigation was underway by the Parliamentary Committee on Access to Information, Privacy and Ethics. With the calling of the election, the Committee was disbanded. In addition, there was a similar investigation by Elections Canada. (3)

I think that was probably one of the main reasons the election was called. It halted the investigation and gave Harper a chance to get a legal team in place.

And they had not even dealt with the Chuck Cadman affair, when Stephen Harper was caught on tape admitting that he knew of the one million dollar bribe presented to the dying MP for his vote. (4)

But the Conservatives were confident that they had irrevocably damaged the reputation of the Liberal leader, and were going to ride that to a majority.

The Campaign Hits a Snag

The environment was becoming an election issue, and Harper's climate change denial was already well known. Then a group of Nobel prize winning environmentalists came out in favour of the carbon tax, which was considered by many to be the best in place to fight global warming.

The Liberals then started to rise in the polls and the Stephen Harper was in trouble.

The fallout from the French and English debates shows the previous pre-debate 10 point Conservative margin is now four percentage points. Tracking shows incremental movement in favour of the Liberals and Stephane Dion. Dion registered his highest score as the person Canadians think would make the best Prime Minister. (5)

We probably all remember the airing of the false starts, when Stephane Dion appeared on Steve Murphy's program. False starts that were later made into a Mike Duffy episode, and a rare press conference by Stephen Harper. But what most people may not know, considering that the media buried the story, is that both Steve Murphy and Mike Duffy were charged with ethics violations, as a result of their complicity in influencing the results of an election.

One decision related to the first broadcast of the false starts (which were followed by the broadcast of the full 12-minute interview) on CTV Atlantic’s newscast CTV News at 6 on October 9. The other related to the rebroadcast by CTV Newsnet of the restarts on the public affairs discussion program Mike Duffy Live Prime Time later that same evening. The CBSC concluded that both broadcasts violated certain provisions of the Radio Television News Directors of Canada (RTNDA) Code of (Journalistic) Ethics and the Canadian Association of Broadcasters’ (CAB) Code of Ethics. (6)

The CRTC also found that the question asked (I wonder who wrote it?) was convoluted and in violation of media fairness:

The CBSC’s Atlantic Regional Panel examined the CTV Atlantic broadcast, while the National Specialty Services Panel adjudicated the Mike Duffy Live broadcast. The Atlantic Panel reviewed the complaints under the provisions of the RTNDA Code of (Journalistic) Ethics and CAB Code of Ethics relating to accuracy and fairness, as well as an article of the RTNDA Code that requires journalists to treat people with decency and courtesy. The Panel observed that the phrasing of Murphy’s question was “confusing, and not only to a person whose first language is other than English. In the strictest grammatical sense, Steve Murphy’s question mixes not only tenses (present and past), but also moods (subjunctive and indicative),” so “blame for misapprehension cannot simply be laid at the feet of the interviewee.” (6)

They also found that:

In the rest of the full interview, which continued from that point but was not broadcast on the Duffy show, the Liberal leader, in response to Murphy’s several questions, dealt with what he would say “to ease the minds of Canadians”, the Liberal economic plan, the proposed carbon tax, deficits, the green shift, taxes, comparable European national policies, and Canada’s military mission in Afghanistan. The transcript of that interview can be found as Appendix A to the Atlantic Regional Panel’s decision in CJCH-TV (CTV Atlantic) re CTV News at 6 (Stéphane Dion interview) (CBSC Decision 08/09-0196+, January 12, 2009). (7)

And even the airing of the false starts by Murphy raised questions:

As anchor for that newscast, Murphy introduced his full interview session, including all restarts, with Liberal leader Stéphane Dion as follows: "Someone once said that in politics a week is a lifetime. Well, it’s now several weeks since we last spoke with Stéphane Dion and a great many things have changed. The world markets are now in turmoil, interest rates and the dollar are falling and the Liberal Party has seen its popularity rise in the polls after the two leaders debates. Against that backdrop, we sat down this afternoon with Stéphane Dion. I began by asking Mr. Dion about his comments that the prime minister has done nothing to put Canadians’ minds at ease about the current economic problems. I asked him, quote, “If you were prime minister now, what would you have done that Mr. Harper has not done?” After beginning to answer that question, Monsieur Dion asked to start the interview again because he did not understand the question.

After a second false start, a member of Monsieur Dion’s staff explained the question to Monsieur Dion and there was also a third false start. Perhaps we shouldn’t have agreed to restart with the questioning and the Liberal campaign was anxious that this exchange not be broadcast and initially we indicated that it would not be. However, on reflection, CTV News believes we owe it to you to show you everything that happened." CTV Atlantic then proceeded to broadcast the full interview, preceded by the false starts and retakes. The false starts consisted solely of a head shot of Stéphane Dion, Murphy’s voice being heard off-camera. The complete interview reflected the more traditional cutaways to the interviewer. (8)

Two months after the election, on December 22, 2008; Mike Duffy was given a plum senate appointment for his efforts. But considering the fact that he had not only violated ethics, but had grossly interfered in the democratic process, should there not be a parliamentary ethics investigation? Should he not be removed from senate?

I don't think he can simply walk away from this, especially when he's still on our dole. What do you think? 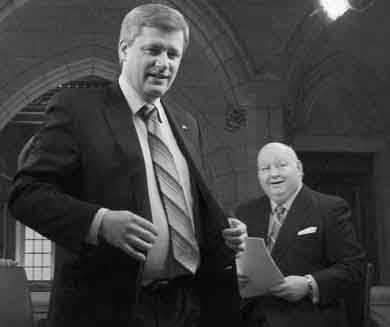 *Peter MacKay's fiancee is an executive at CTV. (they have since split but were together then)
Sources: