After spending four years in Canada, and now a teenager, Wolfgang Droege was getting restless. His mother had remarried and started a new family, and maybe he felt that he didn't fit in:

Wolfie continues the story in his thick German accent: "I came to Canada when I was about 13 years old, in 1963. After living here for about four years, I went back to Germany. I thought I could maybe make a go of it there. I got a trade, working in a hotel, but I had a difficult time adjusting. I had become used to the Canadian way of life and Canadian values. In Germany, you know, there is much more discipline. Much more is expected of you. As a result I was kind of rebellious. Because of my rebellious attitude, I refused to cower before the people who were supposed to be my bosses. I had a difficult time." He sips at a Coke. "Then I tried to join the army. But they told me it would take about half a year for me to get in. There is a certain period you have to wait. I had no support from my family in Germany because they all felt my place was in Canada. For that reason, I came back to Toronto at the end of 1967 and lived with my mother and my stepfather." (1)

While in Germany Droege's neo-Nazi leanings became more obvious, and under the influence of his father and grandfather, his views on Jews and non-whites had grown even more extreme. At the time the far-right party of Adolf van Thadden, was making headlines, and Droege offered his services. He must have felt like one of Hitler's aids.

Virtually everywhere they campaign, the scene is the same: Helmeted police, chanting, angry demonstrators, occasional scuffles, the din of derisive "Sieg Hell" and "Nazis out!" Not since the 1920s, when the Nazis were reaching for power, has a German political party provoked so much tumult and violence as the far-right, ultranationalist National Democratic Party. Chancellor Kiesinger, admitting that the N.P.D. is not purely neo-Nazi, describes it as "extremely harmful." Judging from the intensity of the oratory directed against the N.P.D., there are times when it sounds as if it were the party in power.

There is, of course, no danger that Adolf ("Bubi") von Thadden, 48, the party's aristocratic, articulate leader, will sweep into power—or anywhere near it —in next Sunday's general elections; after all, there are but 30,000 card-carrying members. (2)

It's probably safe to assume that at least some member's of Wolfgang's family were among those 30,000.

Back home in Canada he drifted a bit, working at the International Nickel Company in Sudbury, until a lay-off brought him back to Toronto.

"Of course, by that time, my family was pressuring me, telling me I had to get a trade. They told me I had to do something with my life. So, as a result, I got involved with the printing trade." (1)

He found work as an offset press apprentice at Ready-Set Business Forms in Don Mills, while still living at home with his mother, brother, stepfather and three stepsiblings. Not an ideal situation for a rebellious young man.

But fuelled by his experiences in Germany and an interview on a Canadian station with George Lincoln Rockwell, then leader of the American Nazi Party, he was ready to jump into the neo-Nazi movement with both feet.

Rockwell had laid it all out there. The white race was the "master race", the Holocaust was a hoax and homosexuals should be gassed. He also stated that the real enemy was Communism, and that many Jews were traitors to that cause.

All of the things Wolfie would have heard as a boy, being read the stories of Julius Streicher and the 'Poisonous Mushroom'. He was now on a mission.


About the time of Droege's transformation, there existed a Nazi movement in Canada. Adrien Arcand, a Montreal journalist who called himself the Canadian Fuhrer, published many anti-Semitic articles and established a party that was anti-Communist and promoted the deportation of Jews. On November 14, 1965, he gave a speech in Montreal, which was attended by Gilles Caouette, future Social Credit Party of Canada Member of Parliament, and son of David Réal Caouette, who would later become the federal leader of the Socreds.

Arcand died in 1967, when in Toronto the movement was just getting started, under the leadership of William John Beattie. He created the National Socialist Party, formerly the Canadian Nazi Party, marking a re-emergence of organized neo-Nazi activity in Canada. Beattie held rallies that often turned violent, but he also enticed many to join the cause, including Wolfgang Droege.

In the mid-sixties, William John Beattie made headlines as the noisy leader of the Canadian Nazi Party. A six-foot-tall man who wore his dark, straight hair across his forehead in imitation of Hitler, Beattie maintained that the Nazi dictator was the best thing to come along in the world since Jesus Christ." His party caused a riot in 1965 at Toronto's Allan Gardens when about 5,000 people came out to protest a Nazi rally. Beattie was later arrested and convicted of public mischief for his attempt to paint swastikas on selected homes and sites in the Toronto area. Beattie was "constantly getting material from the American Klan," according to Max Chikofsky, an Ontario private investigator who followed the fascist movement closely at the time. A lot of Beattie's money came from European Nazis and fascists now living in Canada and from right-wing emigre Hungarians, Latvians, Serbians and others. "Some of these people have been fascists for 25 to 30 years; why should they stop now?" (3) 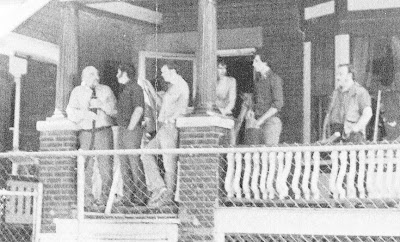 In the fall of 1974, while having a few beers at a bar called Maloney's in downtown Toronto, Droege met a man he had heard a lot about: Donald Clarke Andrews.

Born with the name Vilim Zlomislic in 1942 in the Serbian region of what was then Yugoslavia, Andrews came to Canada at the age of ten. As a youth, he was an excellent student who liked to read. He attended Ryerson Polytechnical Institute under a scholarship and, in his spare time, volunteered with various social democrat groups.

Certainly doesn't sound like a man who would become involved in far-right causes, but Andrews became a victim of the Baby Boomer revolution, that demanded societal changes. This culminated in the Civil Rights movement in the United States and our own rights revolution in Canada.

The Conservative Party were in the process of ousting their leader, John Diefenbaker, and replacing him with the more progressive thinking Robert Stanfield, while the Liberals chose a young "radical" named Pierre Elliot Trudeau.

Times were changing and not everyone wanted to change with them. In February 1967, Donald Clarke Andrews, and two others, school teacher Paul Fromm and University of Toronto student Leigh Smith, formed the Edmund Burke Society, named after an arch-conservative British parliamentarian.

Along with communism, which it loathed with a vengeance, the Edmund Burke Society opposed immigration, sex education, welfare, homosexuality, abortion, big government and Pierre Trudeau.

The Burkers infiltrated left-wing groups and they organized dozens of counter-demonstrations whenever leftists were gathering to protest something. Often, brawls ensued, such as one bloody encounter between the Edmund Burke Society and Viet Cong supporters in April 1968, and another with anti-war protestors in May 1970. Andrews, who delighted in such conflicts, called the violence "militant conservative activism." Some members of the group were convicted of bomb threats, break-ins, thefts, arson, vandalism and countless assaults. At the start, the Burkers were singularly devoted to the anti-Communist cause. By 1968 or so, however, the group's official organ, Straight Talk, was describing the African people as "completely primitive" and describing the Holocaust as an "allegation." (3)

In February 1972, the group decided to change their name to the Western Guard and expanded its list of enemies to include Jews and non-whites. This new direction caused Paul Fromm and Leigh Smith to resign, and while Fromm got back in, Leigh Smith moved on to join Preston Manning's Reform Party.

"It's been a painful thing in my life. I should be proud of what I did, but I have a hard time feeling good about it.... I was and am a conservative and a right-winger. But I wasn't a racist." (3)

But the group's new direction, brought in new members, men who had been associated with John Beattie's Canadian Nazi Party, like John Ross Taylor, Jacob Prins and Martin Weiche. And their publication, Straight Talk, began calling for a "a white Canada" and featuring articles like: "Race is the Real Issue," "White Power," "Mongrelization of Toronto," "Negroes Massacre Whites," "Race Pollution," and "Canada—A White Man's Country." They also grew more anti-Semitic with references to "the jewdicial system" and referring to Jews as the instigators of international communism. (3)

It was at this time that Wolfgang Droege, encouraged by what he had heard about the Western Guard, decided to learn more about them.

Droege recalls his 1974 meeting with Andrews at Maloney's Bar: "I came up to him and said: 'Are you Don Andrews?' And basically we engaged in a conversation. And then we became friends. We talked a lot about politics, but we became more social friends. Shortly thereafter, he was trying to get me involved in the Western Guard, which I did. I was an activist, and I was promoting the cause. My whole life, from that point on, was devoted to promoting the cause. I was always racially conscious, but I just hadn't made any contacts. But that night I contacted someone who I realized was very conscious racially and that was Andrews."

Andrews laughs at the memory. "He probably heard me pontificating at the bar. His views were similar to mine. He seemed like an intelligent, middle-class guy. He went on to be an integral part of our operation. He did have the intellect, plus the bully factor—he was one of our strong-arm guys at the time." (4)

And Droege Would soon meet someone who would move him even deeper inside the far-right.

Continued: Sunshine Boys and a Flash in the Pan