Chapter Forty Continued: John Diefenbaker and the National Energy Board 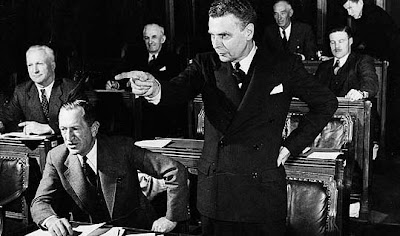 As the Conservatives' foreign affairs critic, Diefenbaker began warning about the danger of American money flowing into Canada to dominate Canadian industry. Then in May of 1956, he had his chance to pick an issue that could define his political direction.

Prime Minister St. Laurent and his Liberals introduced legislation to have the Canadian government lend $80 million to the U.S.-controlled Trans-Canada Pipe Lines Ltd., to build a pipeline from Alberta to Winnipeg in order to export natural gas to the United States.

The loan was the key to a deal with high-flying Texas tycoons who for half a dozen years had been wheeling and dealing with the so-called "minister of everything," C.D. Howe, minister of defence production, minister of trade and commerce, and all-powerful in the St. Laurent government. The autocratic Howe demanded that the loan go through quickly so the pipeline could be finished before the next federal election, and he induced the government to impose closure to limit debate on the measure ... Diefenbaker, and other Tories seized on the arrogance of Howe and the Liberals to begin the most raucous episode in the House of Commons in this century, the infamous "Pipeline Debate." (1)

Dief was in high form:

John Diefenbaker shouted about the Liberals' "brutalitarian tactics" and "executive absolutism," but he had equally poisonous contempt for the buccaneering Texas tycoons – "those Texas millionaires; those pampered pets" – especially Clint Murchison, C.D. Howe's friend and the central Trans-Canada Pipe Lines financier, whom Diefenbaker called a "pirate" who was "financin' by finaglin'." He accused the government of "playing around with . . . these adventurers from Texas and New York, trading away Canada's national resources at the expense of the Canadian people." The deal, Diefenbaker said, would make Canada "a virtual economic forty-ninth state." (1)

The Liberals had a strong majority and the legislation was passed, but it would come back to bite them on the butt.

That August, then Tory leader George Drew fell ill and John Diefenbaker would win the leadership. And though considered a long shot, he built his campaign on the "Pipe-line debates"

With eyes flaming, arms flailing and shoulders and jowls aquiver, Diefenbaker travelled the nation, fervently drying out for "One Canada!" and exultantly proclaiming, "I have come here with a vision of our nation's destiny." It was a "Canada first" vision expounded with visceral nationalism. "I have but one love, Canada. One purpose, its "greatness," he would say. Canadians hadn't heard such a magnificent spellbinder since the heyday of Sir John A. Macdonald.

And he did what many people thought impossible, becoming prime minister in 1957. Soon after the election he commissioned Henry Borden, to help to establish an energy board, primarily to help the Alberta independent oil producers to find a market for their crude oil by building a pipeline from Edmonton to Montreal. Their opponents, the large, international oil companies, found it more profitable to use imported oil in their Montreal refineries.

The most influential individual at the hearings was Walter J. Levy, a New York oil consultant, who proposed that the pipeline not be built and that Alberta oil be exported to the US while Montreal continued to be supplied from abroad. In its reports the commission accepted this recommendation, and called it the National Oil Policy. (2)

Not everyone was happy with the arrangement.

The aim of the National Oil Policy was to promote the Alberta oil industry by securing for it a protected share of the domestic market. Under the policy, Canada was divided into two oil markets. The market east of the Ottawa Valley (the Borden Line) would use imported oil, while west of the Borden Line, consumers would use the more expensive Alberta supplies. For most of the 1961-73 period, consumers to the West paid between $1.00 and $1.50 per barrel above the world price, which, just before the 1973 OPEC oil embargo and price increase, stood at around $3.00. They also paid proportionately higher prices at the pump than Canadians east of the Borden line. (3)

This meant that Ontario paid the higher Alberta price and were restricted from shopping for a better deal, while foreign owned companies in Montreal, got to import cheaper product.

So while those who ascribe to old 'Western alienation theories', for 12 years Ontario paid 33-50% more for oil and gas, to ensure that Alberta had a ready market. And this decision was made by an oilman from New York. For our part, it enabled Canada to avoid the Mandatory Oil Import Quota Program, introduced by Eisenhower in 1959.

So Alberta oil also went to the U.S., and the Americans were able to buy Alberta oil cheaper than we could in Ontario.

When JFK came to power, the relationship with the United States deteriorated greatly, since he and Diefenbaker genuinely disliked each other. There was one small deal that Dief did secure "by finaglin'". The U.S. then had a trade embargo against Communist China, where Canada had been shipping wheat. Because Imperial Oil was a subsidy of an American company, they were not allowed, under U.S. trade law, to fuel the tankers delivering the wheat. Kennedy gave him this concession (5), but after that it was war.

2. Royal Commission on Energy, By Ed Shaffer, The Canadian Encyclopedia