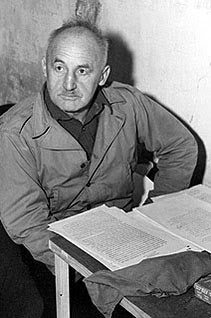 Next to Joseph Goebbels, the best Nazi propagandist was a man named Julius Streicher, founder and publisher of Der Stürmer newspaper, which became a central element for Nazi messaging .

A devout anti-communist, he joined the German Nationalist Protection and Defiance Federation, a group formed in response to the failed German communist revolution of 1918.

And like many Germans at the time, be believed that the Jewish people were working with the Bolsheviks. However, his resulting anti-Semitism did not fit well with the group and he was asked to leave.

Then in 1921, he went to Munich to hear a man speak, who was gaining a reputation as a powerful voice for change.

I had never seen the man before. And there I sat, an unknown among unknowns. I saw this man shortly before midnight, after he had spoken for three hours, drenched in perspiration, radiant. My neighbour said he thought he saw a halo around his head, and I experienced something which transcended the commonplace. (1)

That man was Adolf Hitler, and from that day on, Julias was a devout follower. He marched with Hitler during the Beer Hall Putsch and two years later, started his newspaper, with the purpose of promulgating anti-Semitic propaganda. “We will be slaves of the Jew, therefore he must go." Hitler declared that Der Stürmer was his favourite newspaper, and saw to it that each weekly issue was posted for public reading in special glassed-in display cases known as Stürmerkasten".

As a reward for his dedication, when the Nazi party was re-organized in 1925 Streicher was appointed as head of the Bavarian region of Franconia, which included his home town of Nuremberg. His favourite hang out was a local pub called Cafe Blattnersberg, owned by a man named Werner Droege. Streicher and Droege became friends and when war broke out Droege's son Walter, joined the Lutwaffe, fighting for the Third Reich.

The "Education" of Children 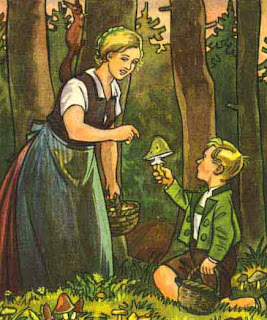 While Streicher's newspaper incited hatred against the Jews, another project was more despicable. He published children's books, with an attempt to embed intolerance in young minds. The most popular of these was Der Giftpilz, or the Poisonous Mushroom.

“Yes, mother,” Franz replies. “I understand that in dealing with bad people trouble may arise, just as when one eats a poisonous mushroom. One may even die!”

“And do you know, too, who these bad men are, these poisonous mushrooms of mankind?” the mother continued. Franz slaps his chest in pride: “Of course I know, mother! They are the Jews! "

Julias Streicher was tried at Nuremberg after the war and executed on October 1, 1946, but his legacy lived on in the family of his friend Werner Droege. Droege's son would marry a woman named Margot and they had a son named Wolfgang or "Wolfie", born in 1949 in Forchheim, Bavaria.

At the age of eight, he went to live with his grandfather Werner:

Wolfie was entranced by the exploits of Hitler and Streicher. At the age of eight, he resolved that he, too, like his father and like his grandfather, would grow to be a Nazi. (2)

In 1963, after his parents divorce, he arrived in Canada with his mother and younger brother Werner, and in time would get his wish, becoming one of the most powerful neo-Nazi leaders Canada has ever known. And he would also create quite a stir when it was discovered that he was the Ontario policy chair for the newly created Reform Party.