Supporting Our Troops Means Also Standing up For Our Veterans 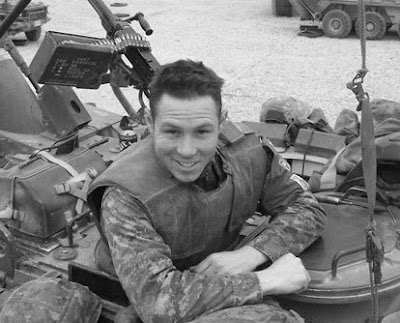 Stuart Langridge appears on the TV screen, a young and confident soldier. It's 2003, and the tank gunner with Lord Strathcona's Horse, an armoured regiment based in Edmonton, is exuberantly talking about his job for a documentary crew filming an episode of Truth, Duty, Valour, a popular show about the Canadian Forces.

Five years later, the Afghanistan veteran would be dead. His world would crash down around him in a haze of alcohol and drug abuse. In the course of a year, he would attempt suicide six times, before successfully hanging himself in a CFB Edmonton barracks. (1)

But the nightmare for the young man's family was only beginning.

A week after they buried their son, Sheila and Shaun Fynes received a letter from National Defence Headquarters in Ottawa. They opened it and were stunned by the first sentence: "I hope this letter finds you in good health and spirits." The letter was an invitation from the director of casualty support to complete a survey about how the military treated the family.

Included were questions about the family's experience in CFB Trenton, Ont., the base where the bodies of soldiers, killed in Afghanistan, arrive by aircraft. The Fynes had never been to Trenton.In the months following Cpl. Stuart Langridge's suicide by hanging in an Edmonton army base in March 2008, and his burial in Victoria, the Fynes got little peace. Instead they became trapped in a legal and bureaucratic nightmare they say the Army helped create. (2)

And things went from bad to worse, as the military tried desperately to cover their tracks.

On Jan. 21, Maj. Stewart Parkinson, the officer assigned to help the family, wrote to headquarters that the Fynes were increasingly unhappy with the delay and the couple wanted to have input into the board, as was their right. "You'll understand if after 10 months of being deceived, misled, and intentionally marginalized (at) various points that they have no faith left in the system," wrote Parkinson. "A bottom line for them at this point is some sign of real respect for Cpl. Langridge and a meaningful participation in the BOI."

In early March, the Fynes walked into a hearing in Edmonton, feeling that at last some good would come from their son's death. The purpose of a BOI is not to lay blame but to identify what the military could do to prevent such a tragedy from happening again. "We thought they would come up with recommendations so soldiers who are sick wouldn't fall through the cracks," said Sheila.

That hope disappeared. A parade of witnesses came forth to talk about Stuart's drug and alcohol abuse problems. A military doctor made a point of noting that the soldier did not suffer from post-traumatic stress disorder. A psychiatrist voiced the opinion that Stuart shouldn't have been allowed to attend the funeral of a fallen comrade the day he committed suicide, adding that ceremony likely prompted him to take his own life. The Fynes couldn't believe what they hearing. Their son had never attended the funeral in question — he was already dead at that point. The Fynes also thought it was highly unusual that the civilian doctor who diagnosed Stuart with PTSD and the base psychiatrist who evaluated him previously were not asked to testify. (3)

Now remember, Stephen Harper controlled every aspect of his war, including the messaging. Clearly the notion that soldiers may suffer from depression, would not be something he would want made public. So instead they attacked the victim. Dawson Bayliss died in his sleep on Nov. 23, 2009, lying alongside his pregnant wife in their Calgary home. "I heard him gasping for air," recalls Naomi Bayliss, eyes moistening. "That's what woke me up. His whole body was convulsing. His fists were balled up and his eyes were rolling back. I tried shaking him but he was totally unresponsive." Naomi lunged for the phone and called 911. Paramedics arrived within minutes. "I'd just given him four breaths and they were there." Despite intense efforts to revive him, Bayliss was pronounced dead at the scene within the hour. (4)

But Dawson did not receive a military funeral or the honours bestowed on a soldier who dies in combat, despite the fact that his death began on those battlefields.

...there is an alternate version of events, another narrative which is very much in dispute; maddeningly elusive and bureaucratically impenetrable, for all that his widow and friends have searched for answers. It goes like this: Pte. Lawrence Matthew (Dawson) Bayliss actually started dying on April 2, 2006, on a dangerous stretch of highway outside Kandahar city, bleeding from a head wound. I was there.

As Liberal MP Dan McTeague put it, before the deaths of five more Canadian soldiers last month: "Pte. Bayliss would appear to be the 134th Canadian to die as a result of combat in Afghanistan." But the official record doesn't say that. (4)

Dawson died in combat with a government that would prefer you become a casualty of war, to "limit the liability", not a causality of this government. But that's what happened. Dawson Bayliss died fighting the system.

And someone else fighting the system, is the recently fired Veterans advocate, Pat Stogran.

The silence has been broken. Veterans are speaking out after years of silently fighting with a system that is not effectively meeting their needs, and they are being heard. The fact that so many Canadians have become engaged in this debate shows that veterans issues matter deeply to them. Today, Canadians are watching and listening intently to what happens next. It is time for government action.

Veterans are intricately woven into the fabric of Canadian society. It is important how they are treated, not only because of our obligation to them, but also because of the associated long-term social and national security implications. If military members are not effectively re-integrated into society after their service, it can have significant impact on our social, health and justice systems. (5)

And as Stogran suggests: "Canadians may not agree on why their sons and daughters are fighting in far-off lands, but there is no lack of fervour when it comes to their support for the troops and their families." You can pin a yellow ribbon or a poppy to your sweater, or plaster your car with 'support the troops' stickers, but unless you are prepared to really stand up for our soldiers, past and present, then you are only blowing smoke.

5. It's time to stand up for them: Canadians may not agree on why our troops fight in far-off lands, but they overwhelmingly support them. So should their government, By Pat Stogran, Citizen Special, August 26, 2010