Chapter Thirty-Six Continued: Prepared for a World That no Longer Existed 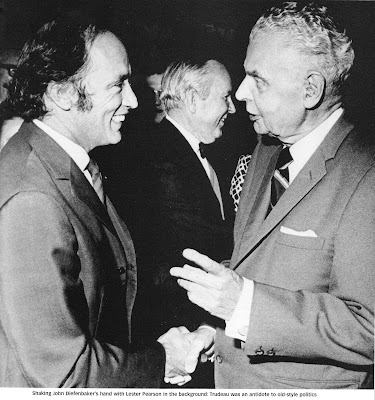 Preston Manning grew up influenced by evangelical fundamentalism, radical free-enterprise conservatism and anti-socialism, embraced by his father. And as Murray Dobbin notes:

What these powerful influences had moulded in Preston Manning was a politician of the past: a politician for the 1940s or 1950s, a politician who was in many ways a carbon copy of his father. And Ernest Manning, so long accustomed to running Alberta more as a father figure than an active politician, had changed little if at all, in the twenty-five years he had been in office. Both men were socially and politically isolated from the changing mainstream of Canadian society. (1)

The Conservative party in Canada was becoming more progressive in their attitudes, to meet the new demands, and the old stalwarts like Diefenbaker were becoming outdated. The world was changing fast and if you didn't embrace those changes you were left behind.

For Ernest and Preston Manning, they only sought to react to the changes by offering pure ideology, based on unbridled capitalism and religious fundamentalism. They might as well have been from another planet. But that didn't stop them from trying to convince others to follow their lead. They wrote Political Realignment in 1967, as a blueprint for the past.

Who Said Conservatives Can't Have Fun? 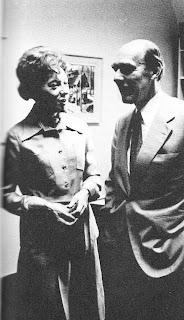 John Diefenbaker was a good Prime Minister, but like the Mannings, the world was passing him by. In 1967, with the wonderful Dalton Camp leading the charge, the Conservatives themselves were in the mood for new leadership.

Flora MacDonald had been named national secretary and Camp the party president.

The annual meeting had set a date in 1967 for a leadership convention. Conservatives identifying with Dalton Camp's position on leadership review were anxious to see candidates offer themselves who would have some hope of rescuing party leadership from Mr. Diefenbaker. (2)

Camp himself had considered running and had MacDonald's support, but when Robert Stanfield threw his hat into the ring, they both lined up behind him.

It has been said that Robert Stanfield was the best prime minister that never was, but I think that can be said of many great politicians over the years, including Tommy Douglas and Ed Broadbent. But I think it also applies to Flora MacDonald and Dalton Camp. Both had a genuine love of this country and everything that Canadians stood for.

But in 1967, as Canadians were celebrating centennial year, the Conservatives were going to do it big for this important leadership convention:

The Conservative leadership convention was an extravaganza that deserved all the superlatives heaped on it. For the first time, a Canadian political party had set out to emulate in scale and style an American presidential nominating convention. It had marching bands and balloons and pretty girls by the hundreds, floor demonstrations, and lavish cocktail parties for thousands. It was a great show and it made great television. More than that, it had great drama. Would John Diefenbaker attempt one last stand? Or would he accept the inevitable and quietly receive the honours due to him, allowing the party to choose his successor? Could the Conservatives find any man with the patience, understanding, and tact needed to reverse the centrifugal forces that seemed determined to tear the party to pieces? Partly because it was the first convention of its kind and partly because of the Diefenbaker drama, the Conservative convention occupies a special place in the memories of the people who were there. It had an excitement that not even the Liberals could match seven months later when they met to elect Pierre Elliott Trudeau, the most intriguing political figure of the age. The Tory convention is the yardstick by which all other leadership conventions must be measured.' (2)

There were others at that convention with a keen interest in the outcome. Preston Manning and his friend Erick Schmidt, were there on behalf of Ernest Manning, who hoped to join the Social Credit with the Conservatives to present a right-wing federal option.

However, Ernest Manning had over estimated his important, and the idea was soundly rejected. Besides, with Stanfield being named the new leader, beating out Diefenbaker 271 votes to 519 on the first ballot, (2) they knew the time wasn't right. Robert Stanfield was a Red Tory and the Mannings hated Red Tories as much as they hated Liberals. When Stephen Harper joined the movement decades later, he would call Red Tories 'Pink Liberals' and was determined to eradicate them from the party.

Preston Manning decided that they would have to wait for the next big wave of anger, that brought Social Credit to power. It would take twenty years.