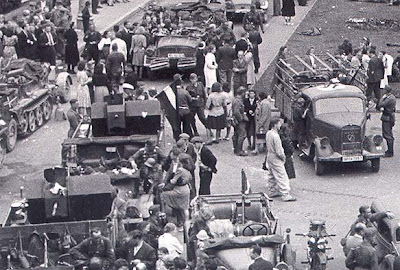 In July of 1941, Latvia became a part of Nazi Germany as German troops moved in to occupy the country. (Photo above captures scene at Riga)

Anyone who opposed the German occupation , as well as those who had cooperated with the previous Soviet Union, were killed or sent to concentration camps.

But the Jewish and Gypsy population was also exterminated by Latvian Nazi collaborators.

The Latvian Legion of the Waffen-SS, between 1941 and 1943, murdered most of Latvia’s 70'000 Jews and thousands more who had been deported from other parts of Europe. (1)

The most predominant group the Arājs Commando, alone killed about 26,000 Jews.

According to Wikipedia, the extermination included:

Into this atmosphere, Armand Siksna was born.

Born in 1944 in Riga, Latvia, Siksna was raised by parents he described as "anti-communist conservatives". His father owned two turpentine refineries and supplied the Germans during the war; Siksna's uncle had a stake in two banks and belonged "to a right-wing fascist-inclined organization"... (3)

Was this organization the Arājs Commando?

In the year of Armand's birth, the Soviets would once again occupy Latvia, after driving out the Germans, and most resistance groups were forced underground. After the war a massive influx of labourers, administrators, military personnel and their dependents from Russia and other Soviet republics began. The ethnic Latvian population felt threatened as a programme to impose bilingualism was initiated.

Many fled the country, including Armand's family, who arrived in Canada in 1957. To a thirteen-year-old boy, whose opinions were already formed, not even Canada was safe from Soviet expansion.

When an adult, calling himself a "true Nazi", he joined the Edmund Burke Society and later the Western Guard, where he would influence, and be influenced by people like Alex McQuirter, Wolfgang Droege and Don Andrews.

A confirmed anti-communist, he joined the Progressive Conservative party but soon found it "was not really right-wing enough for me." He eventually joined the Edmund Burke Society and then the Guard when he "started to realize the importance of racism — the preservation of our race." Siksna recalls: "I had come to the conclusion that I am a true Nazi — and that is the most beautiful and the most noble philosophy of all the political philosophies that have ever existed on this earth."- Siksna was on the executive of the Western Guard and he ran in several municipal and provincial elections. His main contribution seemed to be constant run-ins with the law. As a Guard member, he faced charges for the defacement of property by affixing hate posters. He was accused of the theft of a typewriter when he worked as a security guard at a warehouse, and when police raided his apartment for evidence he was charged with violating the propaganda law because Nazi and Klan material was found there. (3)

Siksna would spend a great deal of time behind bars for a variety of crimes, including the plot to kill a fellow Klansman, but his most comical, if we can find anything humorous about his activities, took place in 1980, when he was convicted of the fraudulent misuse of a credit card. Apparently he found the credit card on the floor of a store and attempted to use it. Unfortunately for him the card was a demo made out to "Mrs. Happy Shopper". (3)

On February 22, the Toronto Sun reported that Armand Siksna had joined the Reform Party. As always, Preston Manning revoked the membership, but only after media exposure. However, though not following the violence of the Klan and other hate groups, Manning's Reform Party ideology was not unlike theirs. Pro-Anglo, anti-immigration, anti-gay, anti-feminism, the list goes on. The only difference was that they were legitimate.

According to Michael Faulkner in Letters from the UK, the British Tory Party, is becoming friendly with the old Latvian anti-Communist movement, now headed by Roberts Zile.

More alarming is the alliance the Tories have struck in the EU with some of Europe’s most unsavory people – Polish and Latvian ultra-nationalist parties with strong anti-Semitic and pro-Nazi associations. And perhaps most alarming of all is the fact that the Tories and many others seem to find this quite acceptable. Where one might have expected outrage, instead there have been indignant attacks on critics of the ultra-nationalists, who are accused of maligning honorable men and repeating “Soviet era” slanders against them. At the centre of this controversy are two parties belonging to the new right-wing grouping, the European Conservatives and Reformists, with which the Tories have chosen to ally themselves. They are The Polish Law and Justice Party and the Latvian For Fatherland and Freedom party. (1)

And in Canada there is some concern with Jason Kenney's plan to build a monument to the victims of communism:

According to an Oct. 14 commentary by Efraim Zuroff in The Guardian newspaper, "if anyone needed additional proof of the unsuitability of the Latvian For Fatherland and Freedom party as a partner for the British Conservatives, their response to a ceremony held yesterday in Riga to honour the Soviet soldiers who liberated the city in 1944 should be a stark reminder of the lack of shared values between the two parties." For Fatherland and Freedom condemned Riga mayor Nils Usakovs for placing a wreath at the Victory Monument which commemorates the liberation of Riga from Nazi occupation, and for taking part in a rally to mark the event. The party called Usakovs' presence at these events "an insult to the victims of Communist terror and a glorification of the Soviet troops." However, For Fatherland and Freedom is well known for honouring Latvia's Waffen-SS veterans who fought for Third Reich and Nazi domination of Europe. As Usakovs stated, "had Riga not been liberated from the Nazis in 1944, there would be no independent Latvia today [and therefore] it is our duty to thank those who fought against the Nazis." In Zuroff's view, the positions taken by the Fatherland and Freedom leader Roberts Zile and other ultra-right politicians "are hardly exceptional in their home countries...

... By joining forces with Fatherland and Freedom and Poland's Law and Justice, says Zuroff, "the Conservatives are granting important legitimacy to a false narrative that seeks to whitewash war crimes and erase the heroic victory of those who saved the world from Hitler and the Nazis." The UK-Latvia link is not an isolated phenomenon in Europe, where right-wing forces in many countries are pressing for bans against Communist political activity.

Here in Canada, the federal Conservatives have hitched their wagon to a similar attempt to falsify history. Stephen Harper and Tory cabinet minister Jason Kenney have both encouraged the groups which initiated the proposal for a "monument to the victims of communism" on the grounds of the National Capital Commission. (5)

We have got to start paying attention.

Continued: Odonists and the Western Guard

2. The Holocaust in Latvia, Wikipedia

5. UK TORIES LINKED TO LATVIAN FASCISTS, The People's Voice, November 2009
Posted by Emily Dee at 4:06 AM