Some Hate Groups Now Working Through the Pro-Life Movement 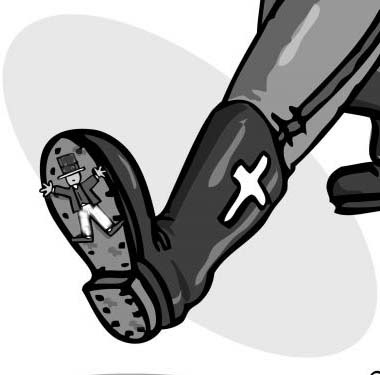 When I first thought about writing a book, it was after reading several on Canada's hate groups.

At the same time, the Religious Right in Canada was gaining prominence and what I found was that the language used by both was almost identical, especially when it came to immigrants, abortion and homosexuality.

I thought I might find some links that would suggest that many of the old hate groups are now hiding behind religion, which gives them far more freedom to say what they want.

But what I found interesting, when researching both, was that they had so many links to the Reform movement, whether they were operating as the Reform Party, the Alliance, the Conservatives or even their original Social Credit identity.

And I am still convinced that many of the old extreme right have found safe haven in both the Religious Right and the Conservative Party of Canada, in part through groups like the Civitas Society and REAL Women of Canada.

The group Stop Racism and Hate Collective have also found some alarming links and posted them under their Myths About Hate Groups. And using the abortion issue as an example:

.... hate groups do not just target people of colour, or Jews, but actively support the most extreme elements of anti-choice groups. A number of former members of the Ku Klux Klan, for example, have direct ties to anti-choice groups. The leader of the Northern Foundation, Anne Hartmann, plays an important role in Realwomen. Barry Wray and Ernie Britskie have picketed the Everywoman's Health Centre in Vancouver. Wray's brother, Dan, was the Grand Titan of the BC KKK in the 1980s and he now is associated with the Pro-Life Association based in Melville, Saskatchewan. Dan also contributes to The Interim - the Campaign Life Coalition's newsletter. Barry Wray, Al Hooper (another long time member of the BC KKK) and Tony McAleer, a former skinhead recruiter, proprietor of the racist Canadian Liberty Net and manager of the racist rock band, Odin's Law, were charged with assault in 1990 an incident in which a passerby objected to them handing out Aryan Nations propaganda. Realwoman BC President Peggy Steachy has also spoken at events with Dan Wray. One meeting was held at the Croatian Cultural Centre and sponsored by the La Rouche organization and Life Gazette. Steachy is the editor of a pro-life newsletter based in Surrey, BC. (1)

Rita Anne Hartmann headed up the Ottawa branch of the Northern Foundation and was a founding member, along with Stephen Harper. Many others in the Northern Foundation now belong to the Civitas Society (the non-Neo-Nazi members, only far-right). Anne's husband Paul, who died mysteriously in 1986, was the leader of the Toronto KKK and a confirmed Odonist.

There is no evidence that Barry Wray was ever involved in the KKK but his brother Dan most definitely was. When Ann Farmer was named leader, not wanting to work under a woman, he created his own group:

Another smaller splinter group was created in B.C., when a provincial organizer named Dan Wray set up a survivalist-oriented Imperial Knights of the Ku Klux Klan, based in rural Aldergrove. (2)

Was prominent in the KKK when Ann Farmer was running the show. He was involved in an attempt to join forces with the Nationalist Party of Canada created and still being led by Don Andrews.

The Stone Mountain unity rally also inspired the Canadian Klan to seek its own alliances with other white supremacist forces. Five days after the Georgia meeting, Farmer and Hooper met with Don Andrews, leader of the Nationalist Party of Canada, to discuss ways of working together. Andrews still scorned the Klan's composition and tactics: "The future belongs to white nationalists of a more intellectual order. We're not interested in flash-in-the-pan media publicity stuff," he said. Still, he was prepared to work with Farmer and Hooper, suggesting "joint statements, tactical alliances, but no union." Farmer talked about "co-operation and dialogue amongst white nationalists ... not an amalgamation of the various groups into a single unit."

From his Toronto jail cell, former Klan leader McQuirter also promoted common action. "I've been writing a lot of letters, proposing and pushing unity," said McQuirter. He still clung to his plans to enter the mainstream political arena: "I'm looking for a political party as a vehicle." * He said a federal political party of the extreme right could find protection under the law. "We can be exempt from the hate law if we're proposing certain political positions. No one could stop a formal political party." Wolfgang Droege shared McQuirter's desire for unity and political action. Before he returned to British Columbia, Droege wrote from prison that there was "a cohesive bond and a potential unity" on the extreme right in Canada and pledged "to co-operate with both the Klan and the Nationalist Party." Droege also talked of building "an effective political force through the normal, legal political process." (4)

McAleer belonged to the Aryan Resistance Movement, whose logo was a sword-bearing eagle superimposed on a large swastika.

Inside the crudely typed bulletin,Graham and his members ranted about "non-white vermin," the"Jewsmedia," and a well-known Canadian doctor who performs abortions ... The Aryan Resistance Movement was formed by Scott Graham and Tony McAleer, or, as he then called himself, Tony McLean, in 1987. Back then, it had about a dozen skinhead members in and around Mission, with about an equal number in Vancouver. (5)

Now I'm not suggesting that all pro-lifers once belonged to a hate group. The majority did not. However, we can't ignore the evidence that there are a number of hate group members who have found a safe haven within the Religious Right movement. REAL Women of Canada are now directing Harper's policy on the status of women, which pretty much means that Canadian women no longer have any status, and Jason Kenney's assault on the gay community has resulted in an increase in violent attacks on gays.

This government has legitimized hatred and we have to start paying attention.

3. Statement in libel case against Deborah Lipstadt by David Irving, for mentioning him in her book Denying the Holocaust